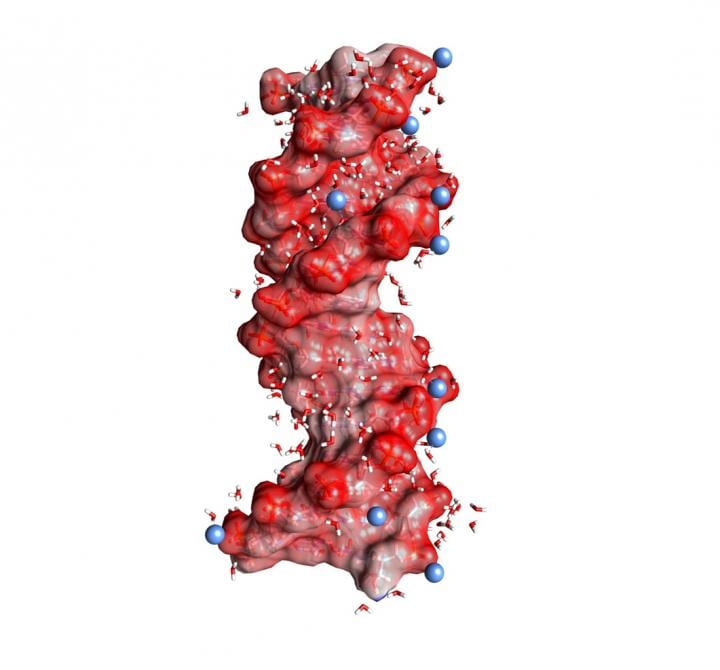 Pairs of negatively charged phosphate groups and positive magnesium ions represent a key structural feature of DNA and RNA embedded in water. Vibrations of phosphate groups have now been established as selective probes of such contact pairs and allow for a mapping of interactions and structure on the ultrafast time scales of molecular dynamics.

DNA and RNA are charged polymers that encode genetic information in a double helix structure and act as key player in the biosynthesis of proteins. Their negative charges are located in the molecular backbone, which consists of ionic phosphate (PO2-) and of sugar groups (Figure 1). Stabilization of the macromolecular structures of DNA and RNA requires a compensation of strong repulsive electric forces between the equally charged phosphate groups by ions of opposite, i.e., positive charge. In this context, magnesium (Mg2+) ions are particularly relevant as they not only stabilize the structure but also mediate the recognition of external binding partners and act as catalytic centers. Moreover, changes of macromolecular structure via dynamic folding processes are connected with a rearrangement of positive ions embedded in the surrounding water shell.

Positive ions are arranged in different geometries around DNA and RNA: in so-called site-bound or contact-pair geometries, a positive ion is located in direct contact with an oxygen atom of a phosphate group. In contrast, the so-called outer ion atmosphere consists of positive ions separated by at least one layer of water molecules from the phosphate groups. The functional role of the different geometries and the underlying interactions are far from being understood. A deeper insight at the molecular level requires highly sensitive probes which allow for discerning the different ion geometries without disturbing them, and for mapping their dynamics on the ultrafast time scale of molecular motions.

In a recent publication, researchers from the Max Born Institute (MBI) demonstrate that vibrations of phosphate groups represent sensitive and noninvasive probes of ion geometries in a water environment. Dimethylphosphate (DMP, (CH3O)2PO2-), an established model system for the DNA and RNA backbone, was prepared in liquid water with an excess of Mg2+ ions (Figure 2, top) and studied by nonlinear vibrational spectroscopy in the femtosecond time domain (1 fs = 10 to the power of -15 s). The experiments make use of two-dimensional infrared (2D-IR) spectroscopy, a most sophisticated method for analyzing the ionic interactions and structures on the intrinsic time scale of fluctuating molecular motions.

The experiments map Mg2+ ions in direct contact with a PO2- group via a distinct feature in the 2D-IR spectrum (Figure 2, bottom). The interaction with the Mg2+ ion shifts the asymmetric PO2- stretching vibration to a frequency which is higher than in absence of Mg2+ ions. The lineshape and the time evolution of this new feature reveal fluctuations of the contact ion pair geometry and the embedding water shell on a time scale of hundreds of femtoseconds while the contact pair itself exists for much longer times (~10 to the power of -6 s). An in-depth theoretical analysis shows that the subtle balance of attractive electrostatic (Coulomb) forces and repulsive forces due to the quantum-mechanical exchange interaction govern the frequency position of the phosphate vibration.

The ability of 2D-IR spectroscopy to characterize the short-ranged phosphate-ion interaction in solution provides a novel analytical tool that complements currently available structural techniques. An extension of this new approach to DNA and RNA and their ionic environment is most promising and expected to provide new insight in the forces stabilizing equilibrium structures and driving folding processes.

Are some urban settings riskier for traffic injury or death? We know less than you…