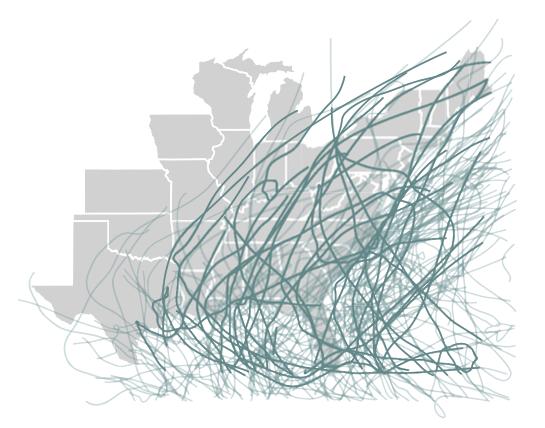 Hurricanes and other tropical cyclones can severely impact human health in communities across the country, but data for these events is limited, especially in a format that is easy to link with human health outcomes.

Scientists have looked at death certificates to see if the cause could be linked up clearly to a storm, but it is easy to miss something in this type of data review. A person could have a heart attack brought on by stress from clearing tree limbs in a yard, following a storm.

An interdisciplinary team – including epidemiologists, engineers, an atmospheric scientist and software developer – led by Colorado State University (CSU) has created an open source data set that can be used for epidemiological research on tropical cyclones. The new tool also provides insights that can guide the design and analysis of this type of research.

Brooke Anderson, lead author of the paper and an associate professor in the Department of Environmental and Radiological Health Sciences at CSU, teamed up on this project with scientists including Andrea Schumacher, research associate with the Cooperative Institute for Research in the Atmosphere (CIRA) at CSU.

“For heatwaves, there has already been a lot of research on what the risks are for human health,” said Anderson. Scientists can estimate community-wide deaths and illnesses associated with several types of climate-related disasters, including heat waves, floods and wildfires, she added.

Anderson said that with this new data set, scientists can now analyze multiple storms in different places and time periods, and drill down to see what happens in different health outcomes for people. Prior to the release of this new tool, most research has focused on data related to a single storm.

Schumacher said she’s always been interested in looking at how counties across the country are affected by hurricane winds on a broad scale. And she found the perfect research partner in Anderson.

“Brooke and I found that we had a similar interest in characterizing hurricane winds,” said Schumacher, who helps develop satellite-based products for hurricane forecasters.

Data set designed for others to build upon
The team used what’s known as the R programming language to create the data set, which will allow scientists from around the world to add new facets and enrich what the team has started.

Anderson said the concept is similar to when a child gets a toy train set, and it just comes with an oval. “Next, the grandparents come along, and you get a bridge or you get new roads that head off in different directions,” she said.

The new tool – maintained by an international group of volunteers on the Comprehensive R Archive Network, CRAN – also provides very precise data. A scientist can look at rainfall during Hurricane Floyd from several days before (or after) the storm came, Anderson said.

CSU scientists are already using the new data set to look at Medicare hospitalizations following storms over a decade in the Eastern United States. Anderson said the team found that the number of people being hospitalized for respiratory conditions tended to increase when the storm hit, and a week after.

Another team she’s part of used the dataset to look at how tropical cyclones affect different birth outcomes, including pre-term birth and pregnancy outcomes.

Schumacher said she sees lots of possibilities for where this research tool can go.

“From my end, there’s still plenty of work to do,” she said. “What we’ve created is a really good start. I can see all kinds of ways that we can improve on it, especially as we get better and better observations.”