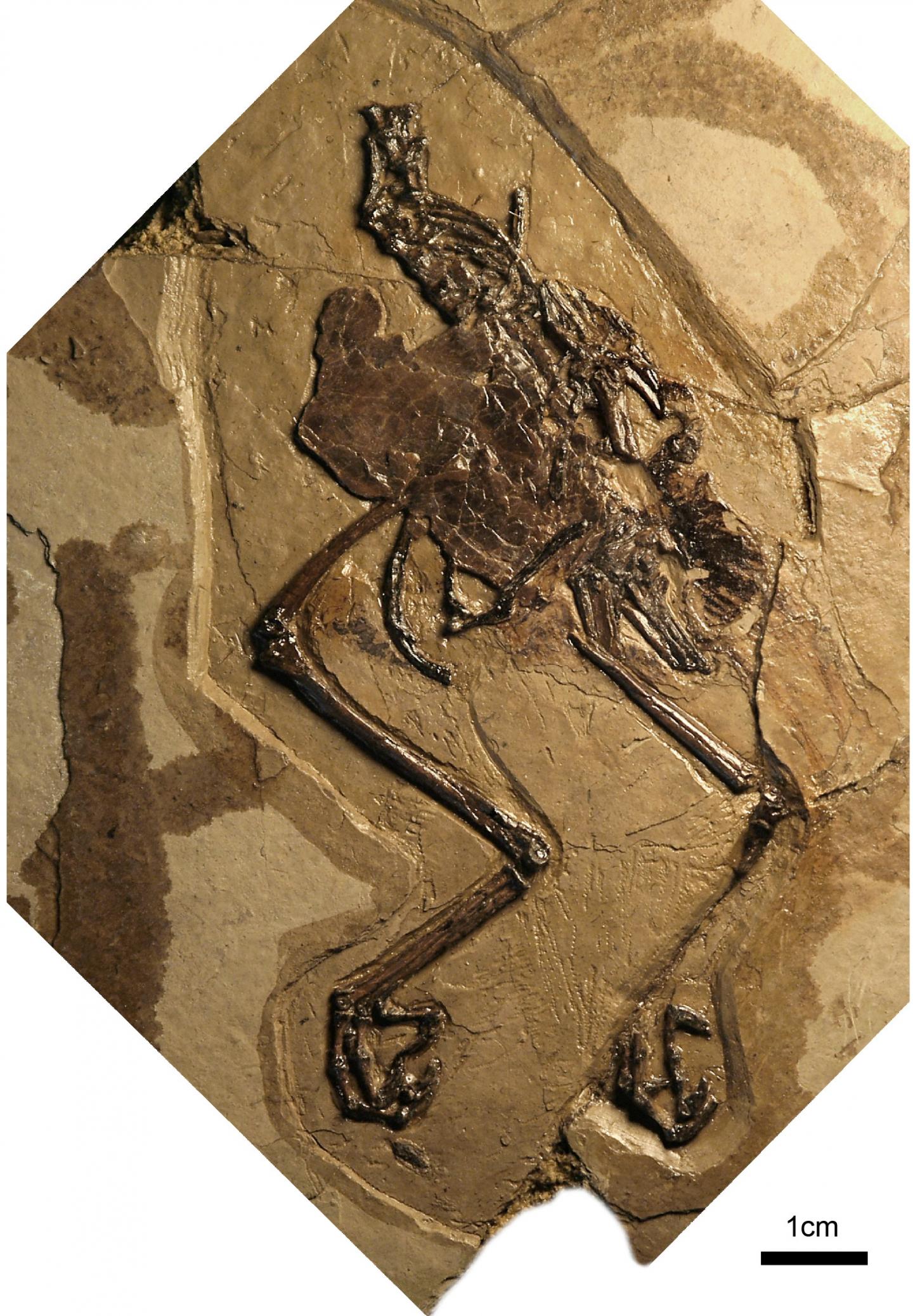 A team of scientists led by Alida Bailleul and Jingmai O’Connor from the Institute of Vertebrate Paleontology and Paleoanthropology (IVPP) of the Chinese Academy of Sciences reported the first fossil bird ever found with an egg preserved inside its body. Their findings were published on March 20 in Nature Communications.

The new specimen, representing a new species, Avimaia schweitzerae, was discovered in 110-million-year-old deposits in northwestern China. It belongs to a group called the Enantiornithes (“opposite birds”), which were abundant all around the world during the Cretaceous and co-existed with the dinosaurs.

The new fossil is incredibly well preserved, including the remains of an egg inside its abdomen (Fig. 1). Because the specimen is crushed flat, it was only after a small fragment was extracted and analyzed under the microscope that the team realized that the unusual tissue was an egg.

Detailed analysis of the eggshell fragment revealed a number of interesting facts indicating the reproductive system of this female bird was not behaving normally: The egg shell consists of two layers instead of one as in normal healthy bird eggs, indicating the egg was retained too long inside the abdomen.

This condition often occurs in living birds as a result of stress. The unlaid egg then gets coated in a second layer (or sometimes more) of eggshell. This abnormality has also been documented in sauropod dinosaurs, as well as in many fossil and living turtles.

In addition, the eggshell preserved in Avimaia was extremely thin – thinner than a sheet of paper – and did not show the correct proportions of healthy eggs. (Note that avian eggshells consist of three sublayers with particular dimensions.)

These abnormalities suggest that the preserved egg may have been the cause of death of this “mother bird.” Egg-binding, in which the egg becomes stuck inside the body causing death, is a serious and lethal condition that is fairly common in small birds undergoing stress.

Despite being malformed, the egg is excellently preserved, including parts of the eggshell that are rarely seen in the fossil record, such as traces of the egg membrane and the cuticle, which are mostly made of proteins and other organic materials.

Scanning electron microscopy revealed that the cuticle (the outer most protective layer of the eggshell) was made up of very small spherules of minerals. This type of cuticle morphology would be expected for birds that partially burry their eggs, as it has already been proposed to be the case for enantiornithines (Fig. 2). Finding this morphology in Avimaia also supports the hypothesis that a cuticle with protective spherules represents the ancestral condition for avian eggs.

Female birds about to lay eggs deposit a unique bone tissue found inside the empty spaces of their skeleton, which serves as a calcium reservoir for the developing eggshell. Some researchers have argued that this tissue, called medullary bone, is present in other fossils (e.g., other fossil birds), as well as some non-avian dinosaurs and pterosaurs. However, some of these identifications were ambiguous.

Analysis of a fragment of leg bone from the new specimen revealed the presence of medullary bone. Avimaia is the only Mesozoic fossil in which additional morphological evidence of reproductive activity (i.e., the egg) supports the identification of medullary bone.

The preserved egg allows the specimen to be unequivocally identified as female, allowing scientists to test current hypotheses regarding sexual dimorphism (differences between genders).

This new specimen is arguably one of the most interesting Cretaceous fossil birds yet discovered, providing more reproductive information than any other Mesozoic fossil bird.

Endometrial cancer clinical trial aims to pave the way for…