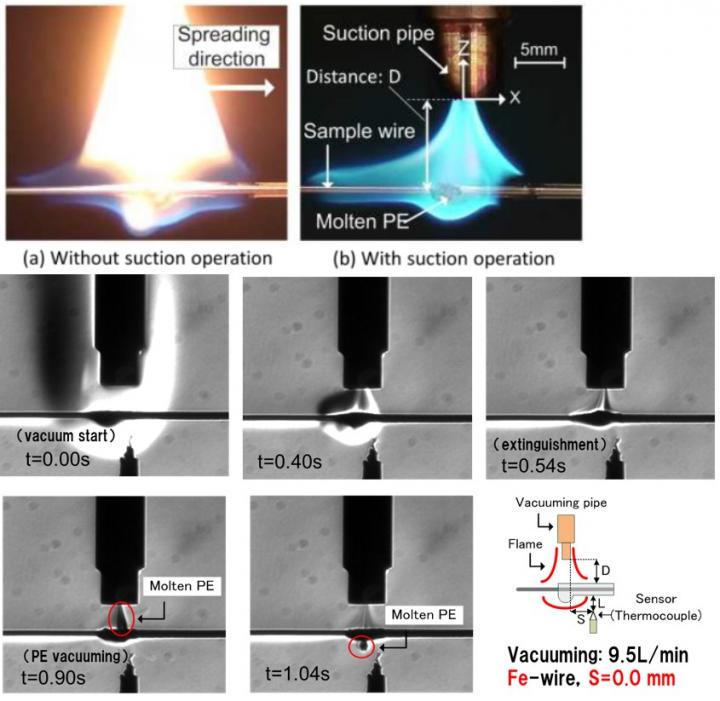 A research team in the Department of Mechanical Engineering at Toyohashi University of Technology has developed new concept of fire extinguisher optimized for space-use; named Vacuum Extinguish Method (VEM). VEM is based on the completely “reverse” operation of widely-used fire extinguisher, namely, spraying extinguisher agent(s) into the firing point. VEM is sucking the flame as well as combustion product, even fire source, by vacuum into the vacuum chamber to remove the firing matters from the space of interest. This reverse concept shall be suitable for the special environments that are highly enclosed (such as space vehicles or types of space transportation, submarines, and types of deep sea submersed vehicles) to prevent or suppress spreading the harmful combustion products such as fume, particulate matters, toxic gas component across the entire enclosed cabin. This is especially advantageous for space use, preferable in an extreme vacuum environment. This work is a collaborative research with the Hokkaido and Shinshu Universities. The results of our research were posted on-line in the special issue of Fire Technology; Spacecraft Fire Safety on April 16, 2019.

At present, fire extinguishers used in spacecraft or space stations in the US, Japan, Europe and Russia are mainly CO2-spraying gas extinguishers, although water mist was partially considered as an alternative. The CO2 extinguisher was preferred because its fire-fighting performance has been promised for electric fire (which is the main cause of fire in space) in the past experience on earth. However, we must notice that the spraying type of extinguisher is not the best choice for space-environment because of the limited volume inside the cabin and the increase of CO2 concentration, assuming it is adopted. It is, therefore, necessary to wear an O2 mask before the device’s extinguisher process is executed, which causes a delay of action and allow the fire to grow. In addition, while spraying CO2 gas toward the firing zone, the harmful combustible products as well as CO2 gas shall spread across the cabin. Such spreading harmful gas components (even CO2) might be eventually trapped by the filter during the air-recirculation procedure. However, an enormous amount of time is obviously necessary to collect all such harmful gas components so that the mission would be delayed accordingly. Furthermore, the CO2 filter wears out and requires replacement; consequently, large amount of stock for replacement would be needed for longer space mission (likely to go-to-Mars). On earth, contrarily, such issues are not critical, therefore, we focused our attention on the discovering the best alternative for space.

VEM is a state-of-art concept newly proposed by our team, which is basically a “reverse” operation to fight fire. It is based on the suction of the combustible products and the flame (even the firing source) with vacuum, and the collecting them into a vacuum container (vacuum chamber) to be isolated. In case fire continues in the chamber, we can adopt any fire extinguisher procedures when necessary. Should this method be successful, the pre-process of fire-fighting (putting O2 mask on) would be excluded to manage the time for taking proper action. In addition, the product gas would be effectively removed from the cabin to reduce damage to the filter. Though this method sounds odd on earth, it might be most preferable for space use.

An ex-student, Mr. Taichi Usuki who was master course student at Hokkaido University supervised by Prof. Yuji Nakamura, investigated the feasibility of this concept and formulated the explanation of how it could be implemented. Three types of extinction modes were found and each extinction mode was controlled by a suction flow rate. Recently, the article summarizing this concept was accepted to be published at a special issue, “Spacecraft Fire Safety” in Fire Technology, which is a prominent international journal in the fire community.

The leader of the research team, Professor Yuji Nakamura, said, “The idea initially emerged through unreserved discussions with US researchers. Though the test of the concept was simple to implement and confirm, however, systematic study to show its performance such as formulate the performance based on a mathematical model was arduous. With the assistance of ex-student, Mr. Usuki, and the collaborator, Prof. Wakatsuki, the concept was confirmed and the complete test device was successfully developed. Controlled vacuuming was introduced by an ejector system and all devices were activated with sensors in the test to improve reproducibility substantially. Fascinating flame suction images (direct photograph and Schlieren imaging) show the result and provide rich images on how the process should be modeled. At present, space agencies are wary to introduce this concept because no such device was developed and tested by them. It is understandable that their decision-making is frequently based on safety so that older technologies which are well-distributed and reassuring are approved. However, it does not mean that the new concept has no possibility of being considered. Emerging technological concepts frequently require constant proposal presentations to be recognized. We will continue to refine and present the concept”.

The research team expects VEM to be an upcoming technique in future space missions and that the concept would also be applicable for extinguishing certain unusual fire which is severe and unmanageable with currently-used extinguishers such as metal powder fire. It is also expected to be applied for the fire in clean rooms (e.g., operating room), where the spraying fire-fighting agents would cause severe damage to the structure and equipment to have large delay of reactivation. It is expected that the main role of researcher is to propose the new idea scientifically. Moreover, some years later, the concept may possibly be a component of a live product. In the future, long-term space mission will be critically considered and effective, then fire safety strategy requires reconsideration. Moreover, because a non-specialist like a newly recruited astronaut may be involved in activities in space hotel, space travel etc., easy-to-use emergency devices will be mandatory. Putting O2 mask prior to the firefighting does not sound appropriate. This concept would eventually become a new standard fire-fighting device in space. Potentially, for in house use, a “new” vacuum cleaner may have special options with this fire extinguisher. Sounds ridiculous? Maybe not.

This work was supported by Grants-in-Aid for Challenging Exploratory Research, The Ministry of Education, Science, Sports and Culture (No. 25560160).