New computer model helps brings the sun into the laboratory 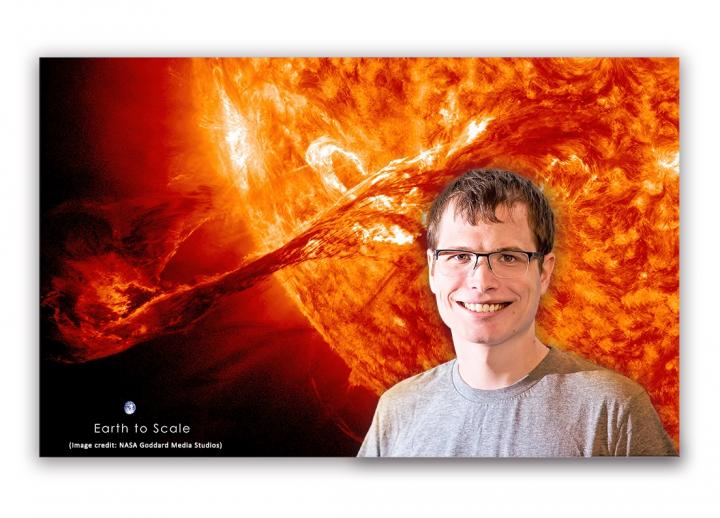 Every day, the sun ejects large amounts of a hot particle soup known as plasma toward Earth where it can disrupt telecommunications satellites and damage electrical grids. Now, scientists at the U.S. Department of Energy’s (DOE) Princeton Plasma Physics Laboratory (PPPL) and Princeton University’s Department of Astrophysical Sciences have made a discovery that could lead to better predictions of this space weather and help safeguard sensitive infrastructure.

Fusion, the power that drives the sun and stars, combines light elements in the form of plasma — the hot, charged state of matter composed of free electrons and atomic nuclei — that generates massive amounts of energy. Scientists are seeking to replicate fusion on Earth for a virtually inexhaustible supply of power to generate electricity.

The Princeton scientists made their findings while studying roped-together magnetic fields that loop into and out of the sun. Under certain conditions, the loops can cause hot particles to erupt from the sun’s surface in enormous burps known as coronal mass ejections. Those particles can eventually hit the magnetic field surrounding Earth and cause auroras, as well as interfere with electrical and communications systems.

“We need to understand the causes of these eruptions to predict space weather,” said Andrew Alt, a graduate student in the Princeton Program in Plasma Physics at PPPL and lead author of the paper reporting the results in the Astrophysical Journal.

The model relies on a new mathematical method that incorporates a novel insight that Alt and collaborators discovered into what causes the instability. The scientists found that a type of jiggling known as the “torus instability” could cause roped magnetic fields to untether from the sun’s surface, triggering a flood of plasma.

The torus instability loosens some of the forces keeping the ropes tied down. Once those forces weaken, another force causes the ropes to expand and lift further off the solar surface. “Our model’s ability to accurately predict the behavior of magnetic ropes indicates that our method could ultimately be used to improve space weather prediction,” Alt said.

The scientists have also developed a way to more accurately translate laboratory results to conditions on the sun. Past models have relied on assumptions that made calculations easier but did not always simulate plasma precisely. The new technique relies only on raw data. “The assumptions built into previous models remove important physical effects that we want to consider,” Alt said. “Without these assumptions, we can make more accurate predictions.”

To conduct their research, the scientists created magnetic flux ropes inside PPPL’s Magnetic Reconnection Experiment (MRX), a barrel-shaped machine designed to study the coming together and explosive breaking apart of the magnetic field lines in plasma. But flux ropes created in the lab behave differently than ropes on the sun, since, for example, the flux ropes in the lab have to be contained by a metal vessel.

The researchers made alterations to their mathematical tools to account for these differences, ensuring that results from MRX could be translated to the sun. “There are conditions on the sun that we cannot mimic in the laboratory,” said PPPL physicist Hantao Ji, a Princeton University professor who advises Alt and contributed to the research. “So, we adjust our equations to account for the absence or presence of certain physical properties. We have to make sure our research compares apples to apples so our results will be accurate.”

Discovery of the jiggling plasma behavior could also lead to more efficient generation of fusion-powered electricity. Magnetic reconnection and related plasma behavior occur in tokamaks as well as on the sun, so any insight into these processes could help scientists control them in the future.

Support for this research came from the DOE, the National Aeronautics and Space Administration, and the German Research Foundation. Research partners include Princeton University, Sandia National Laboratories, the University of Potsdam, the Harvard-Smithsonian Center for Astrophysics, and the Bulgarian Academy of Sciences.