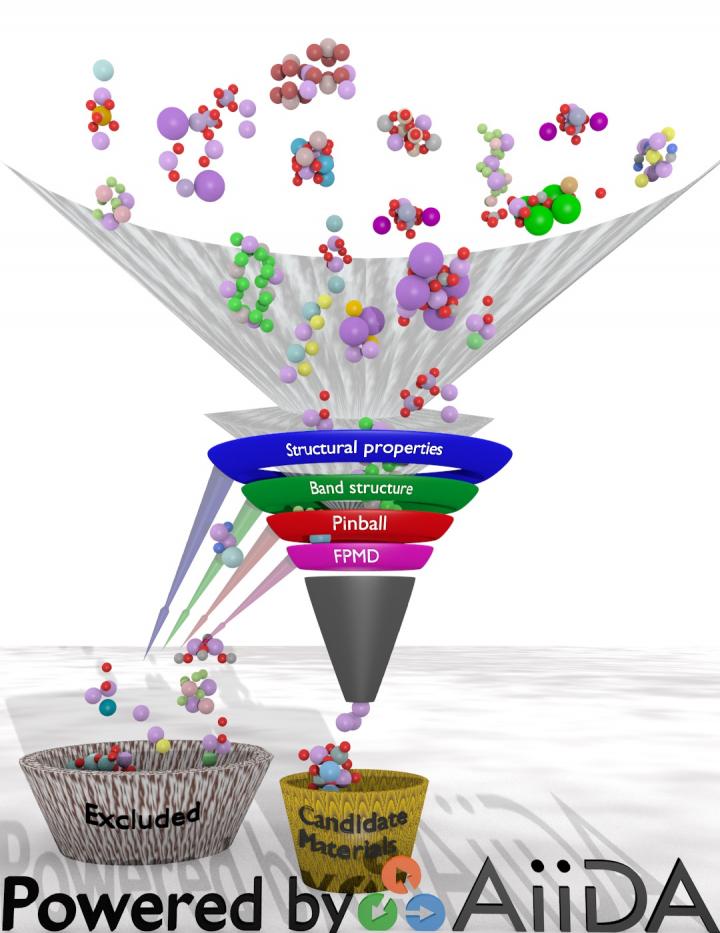 Replacing the volatile and flammable liquid or polymer electrolytes now used in lithium-ion batteries with inorganic solid-state lithium-ionic ceramic conductors could significantly improve both safety and performance of the cells. Solid-state conductors would allow for novel cathode and anode chemistry, prevent the growth of Li-metal dendrites and push miniaturization.

Though researchers have investigated several structural families of promising solid-state Li-ion conductors over the past decades, the fact that there are many desired properties–including fast-ionic/superionic diffusion of Li ions, very low electronic mobility, wide electrochemical stability windows, and high mechanical stability–means that no one material has emerged as an ideal candidate for development and so the search continues.

Previous research has been largely led by chemical intuition and carried out through immediate experimental investigation. Synthesizing ionic compounds and measuring ionic conductivity are labor intensive tasks though and experimental results can be difficult to interpret. Computational methods, on the other hand, are easy to automate and run in parallel. That is, they can efficiently identify materials that merit the hassle and expense of experimental investigation in the search for new solid-state electrolytes.

Current approaches to computational screening rely on simulations of the electronic structure to determine the insulating character of a material and on molecular dynamics simulations to predict the Li-ion diffusion coefficients. This means running thousands of calculations and so automation and reproducibility are essential. Computational methods need to be inexpensive enough to be run for thousands of materials, yet accurate enough to be predictive. In the paper High-throughput computational screening for solid-state Li-ion conductors, the researchers present a new framework that meets these requirements. Screening compounds through several stages of computational filter, they probe new structural families for promising Li-ionic conductors in a cost-effective, accurate way.

The new approach was used to screen two repositories of experimental structures, the ICSD and COD, which describe some 1,400 unique crystal structures between them. After identifying electronically insulating systems, the scientists used their recently introduced pinball model — a framework that is based on physical observations of how electrons behave in an ionic system and which greatly simplifies the modeling of ionic conductors–to identify materials likely to display fast-ionic diffusion. Some 115 identified structures were then simulated with accurate first-principles molecular dynamics for a total of 45 nanoseconds at high and intermediate temperatures.

The approach resulted in the identification of five materials with fast ionic diffusion–some in the range of the well-known superionic conductor Li10GeP2S12–as well as 40 materials that at least showed significant diffusion at 1000 K. Though it is not possible to say whether these latter materials can be considered fast-ion conductors at lower temperatures because of the short time scales of the study, they are promising for more detailed study.

The authors expect the data, new methods and analysis techniques described in the paper to be useful in the ongoing search for novel descriptors of fast Li-ion diffusion in the solid state. They have made the first-principles simulations carried out in the paper publicly available in an open-source archive on MaterialsCloud

Scienmag Feb 15, 2019
Researchers use genetic manipulation techniques to highlight how the function of a protein can lead to…

The first AI universe sim is fast and accurate — and its…