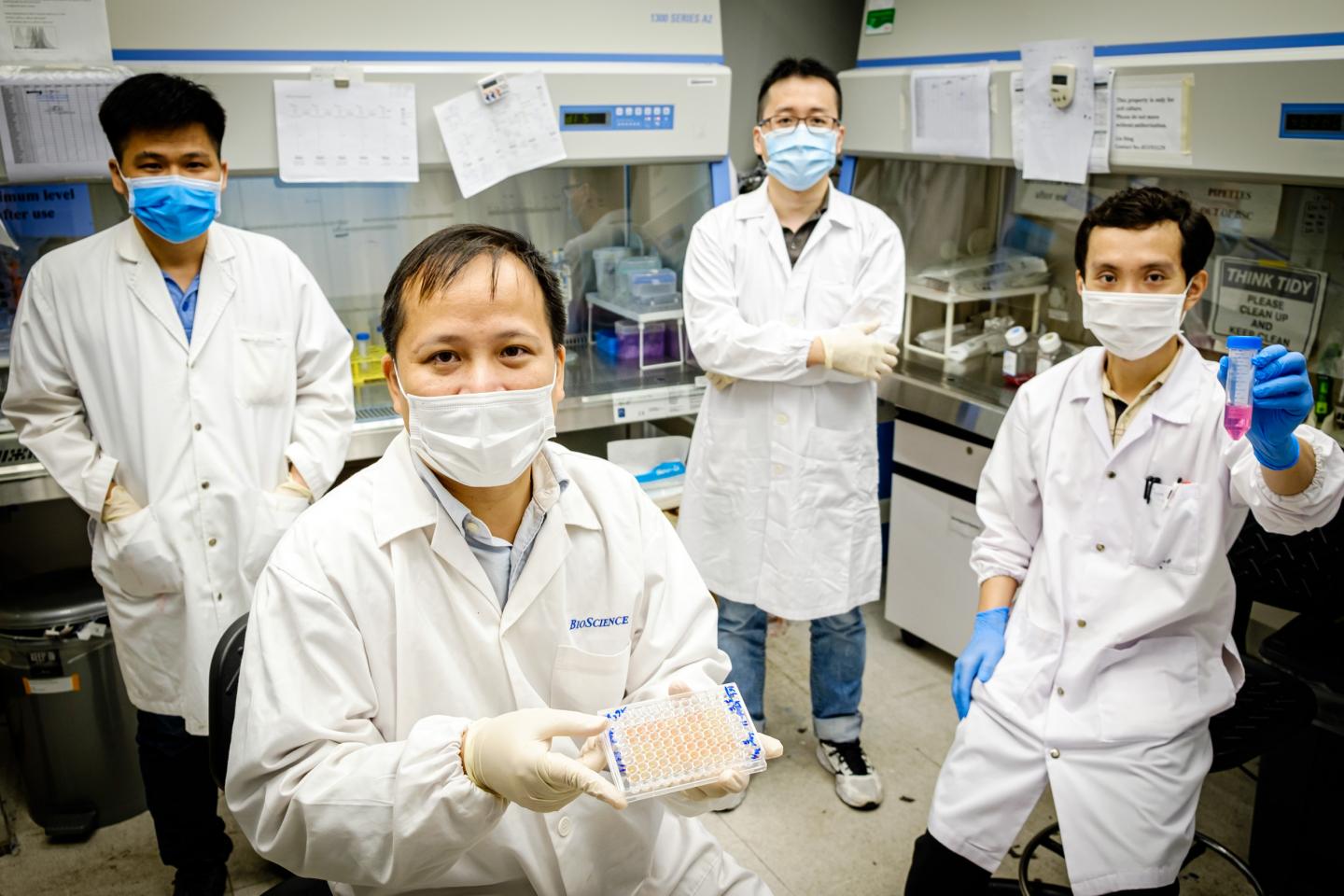 When the body detects a pathogen, such as bacteria or viruses, it mounts an immune system response to fight this invader. In some people, the immune system overreacts, resulting in an overactive immune response that causes the body to injure itself, which may prove fatal in some cases.

Now, scientists from Nanyang Technological University, Singapore (NTU Singapore) have created a compound that could help to reduce this overactivation without impairing the body’s entire immune response.

An overactive immune system leads to many autoimmune disorders – when the immune system mistakenly attacks healthy tissues – such as rheumatoid arthritis and type 1 diabetes. More recently, it has also been linked to severe COVID-19 infections, in which immune-system signalling proteins ramp up to dangerous levels, leading to damage to the body’s own cells.

This compound designed by the NTU research team, called ASO-1, targets tyrosine kinase 2 (TYK2), a member from the Janus kinase (JAK) family of enzymes that play a key role in regulating the body’s immune response. A recent study led by the University of Edinburgh and published in the leading scientific journal Nature found that high levels of TYK2 have been associated with severe COVID-19 .

Through lab experiments using human cells grown in a dish, the NTU scientists found that ASO-1 potently reduced TYK2 levels over a sustained period and inhibited immune signalling pathways that have been associated with autoimmune disorders.

This points to the potential of the ASO-1 compound forming the basis for treatment of autoimmune conditions, said the team led by Professor Phan Anh Tuan from NTU Singapore’s School of Physical and Mathematical Sciences (SPMS).

Professor Phan, who is also the interim director of the NTU Institute of Structural Biology, said: “Human genetic studies have suggested that deactivating TYK2 could provide protection against a broad range of autoimmune conditions such as rheumatoid arthritis, psoriasis, lupus, and type 1 diabetes.”

Dr Lim Kah Wai, NTU senior research fellow and co-lead author of the study, added: “With the UK-led study of critically ill COVID-19 patients published in Nature linking high TYK2 expression to severe COVID-19, ASO-1 could be a therapeutic agent worth investigating further. We are planning to conduct further pre-clinical work to validate its therapeutic potential.”

The findings were published in February in the scientific journal ImmunoHorizons, a publication of The American Association of Immunologists, and the research team has filed a patent for the compound they designed.

Recently, TYK2 has emerged as researchers’ preferred target. As the structures of the four members are highly similar, it is important to selectively target TYK2 to limit unwanted side effects.

The ASO-1 compound designed by the NTU research team is an antisense oligonucleotide (ASO). ASOs are a type of RNA therapeutics – they target the messenger RNA (mRNA), which carries genetic instructions that cells ‘read’ to make proteins. ASO-1 is designed to bind to TYK2 mRNA, thus preventing cells from producing TYK2 protein.

The research team conducted lab experiments on human cell cultures and found ASO-1 to be highly potent and selective for TYK2, with no effect against the other JAK proteins. Dr Lim noted that this high potency of ASO-1 rivals that of recent ASO drug candidates that have advanced to clinical trials or have been approved for clinical use.

The NTU team discovered ASO-1 from over 200 potentially effective ASOs, which were designed based on their in-house expertise on nucleic acids.

The team has established an integrated platform spanning the design, synthesis, and cellular testing of RNA therapeutics. TYK2 stands among a range of therapeutic targets for immunology and cancer therapy, which is the primary focus of the team.

The NTU researchers plan to partner several academic collaborators to test ASO-1 in animal models and are open to industrial collaboration on the development of the ASO-1 compound towards clinical use.

Ranked amongst the world’s top universities by QS, NTU has also been named the world’s top young university for the past seven years. The University’s main campus is frequently listed among the Top 15 most beautiful university campuses in the world and has 57 Green Mark-certified (equivalent to LEED-certified) buildings, of which 95% are certified Green Mark Platinum. Apart from its main campus, NTU also has a campus in Novena, Singapore’s healthcare district.