New climate model for the IPCC 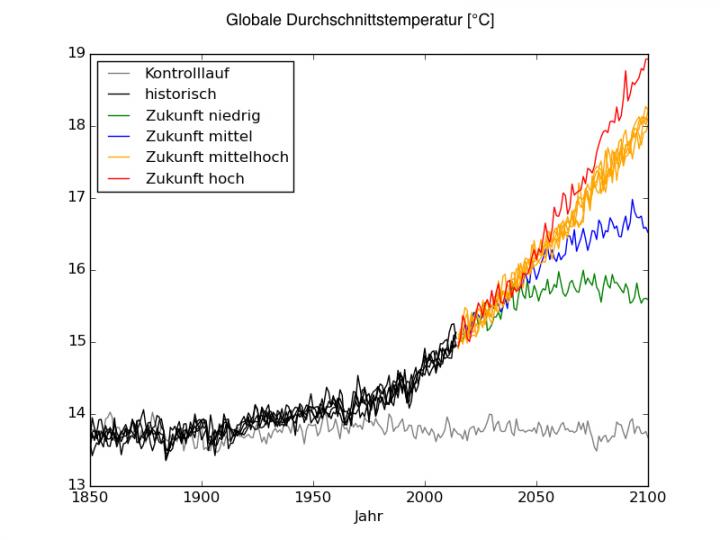 Researchers from the Alfred Wegener Institute now, for the first time, feed the results from their global models directly into the Intergovernmental Panel on Climate Change database. The data is particularly interesting because the underlying model, developed at the AWI, depicts the sea ice and the oceans with far greater definition than conventional methods. The results are used by climate scientists and stakeholders around the globe to determine the effects of climate change on humans and the environment.

How much warmer will the Earth become in the coming decades as a result of climate change? How will this change our world? These are some of the most pressing questions of our time, and researchers around the globe are using climate models in an attempt to find the answers. But Earth’s climate is extremely complex and modelling it using super computers is difficult. Every climate model has its strengths and weaknesses. In order to better estimate the future climate developments, the results of various climate models around the globe are compared, since comparisons make it clearer which climate trend is most likely and what degree of uncertainty the prognoses possess. A total of about 50 research institutions worldwide are taking part in this extensive international project, known as the Coupled Model Intercomparison Project (CMIP). It is extremely important because the results are fed into an international database and form the basis for the next IPPC (Intergovernmental Panel on Climate Change, IPCC) report, which will be published in 2021 – the Sixth Assessment Report, AR6.

Only three institutions from Germany

Now, for the first time, The Alfred Wegener Institute, Helmholtz Centre for Polar and Marine Research (AWI), with its own model, is part of this major international comparison project. Just a few days ago, the AWI researchers entered their first detailed climate model results into the international CMIP database. “It’s very special belonging to one of the institutions that make a significant contribution to the data that the Assessment Report will be based on,” comments meteorologist Dr Tido Semmler, who coordinates the AWI’s work for the international comparison project CMIP. “There are only three research institutions from Germany involved – the Max Planck Institute for Meteorology in Hamburg, the German Aerospace Center and us.” In addition, the German Climate Computing Center (DKRZ) in Hamburg plays a key role, since it offers the three institutions computer time and storage space as well as support in performing the simulations and the provision of data.

There’s a particular reason why the AWI has now become involved: the experts have employed a new and, to date, little-used method to model the climate – a so-called “unstructured grid”, which in terms of climate research amounts to a mini revolution. Until now, almost all the research groups around the globe have worked with what are known as “structured grids”. The principal behind these grids is simple: since modelling the global climate is far too complex, researchers divide the Earth and the atmosphere into grid boxes, cubes with edges that are usually 100 kilometres long. In these boxes, the biological, chemical and physical processes that affect the climate can be modelled using supercomputers. But the fact that a length of 100 kilometres is much too crude to take important processes directly into account – like the small eddies, only a few kilometres in size, in the Gulf Stream and other ocean currents that lead to increased heat and moisture exchange between the sea and the atmosphere. Many climate models are unable to accurately depict the course of the Gulf Stream, which originates in the Gulf of Mexico and travels northwards along the Florida coast before veering eastwards towards Europe. In a lot of models the current moves much too far to the north due the small eddies not being included.

Ideally we would have a more finely meshed global grid with squares covering no more than ten kilometres. But that would increase the number of individual calculations. Even for climate simulations spanning just a few years, a mainframe computer would need several weeks. But experts at the AWI have now developed an alternative “unstructured grid”. This allows the individual grid elements to be scaled down – to roughly ten kilometres – for certain selected regions. While the climate for the entire globe can be modelled using a grid with normal-sized squares, the flexibly adjustable mesh makes it to a certain extent possible to zoom in on specific regions, such as the Gulf Stream. The unstructured grid has added an interesting new dimension to climate modelling, which is highly important for the CMIP process.

“As a rule, in climate modelling we combine various different models that simulate different things – for instance, a model that describes the ocean in detail and a second model showing the processes in the atmosphere,” explains Tido Semmler. ” The ocean model FESOM, which we developed, uses an unstructured grid. For the atmosphere, on the other hand, we use a conventionally structured model developed at the Max Planck Institute for Meteorology.” This makes comparisons in the context of the CMIP particularly interesting: the Max Planck Institute for Meteorology couples the atmospheric model with its ocean model, which is based on the traditional grid. But the colleagues at the AWI couple the atmospheric model with their own ocean model, which uses the unstructured grid. “We and the CMIP partners are keen to see the direct comparison of these results,” says Tido Semmler.

The results from the circa 50 climate models, which the AWI and the other CMIP partners are currently feeding into the international database, will be used by numerous other researchers during the next two years. Above all by those experts who are investigating the impact of climate change on people and habitats on our planet. These research findings will, in turn, be the basis for the IPCC reports; the 6th Assessment Report and also the summary of the IPCC’s report, the Synthesis Report, which will mainly include policy recommendations.

Sample modelling results (see graphic online): The mean global temperature trend from 1850 to 2100 according to the new AWI climate model.

The AWI climate model includes the main natural drivers of the Earth’s temperature, such as solar radiation, natural greenhouse gas and aerosol concentrations as well as volcanic aerosols. The grey line represents the control run with natural drivers and greenhouse gas concentrations of 284 ppm CO2 for the year 1850. The black line shows the historical mean global temperature trend with increasing greenhouse gas concentrations from 1850 up to 400ppm CO2 today, which have led to a net global warming of circa 1 °C. The coloured lines show the possible future development of the mean global temperature depending on the emission scenario.

The fluctuations in the lines show the natural variations in the mean global temperature without greenhouse gas emissions. For the historical trend (black line) and the moderate scenarios (circa 4 °C warming with 871 ppm CO2 in 2100) for the future (yellow line), several simulations were carried out to estimate the degree of uncertainty for the results. The AWI models have fluctuation range of roughly half a degree Celsius.

For the low emission scenario (445 ppm CO2 in 2100), there will need to be concerted efforts to reduce greenhouse gas emissions in order to limit the rise in mean global temperature to within 2 °C; with the high emission scenario (1142 ppm CO2 in 2100) it’s assumed that no measures are taken to reduce greenhouse gas emissions, so that according to the present model the mean global temperature will rise by circa 5 °C.

A catalyst for sustainable methanol