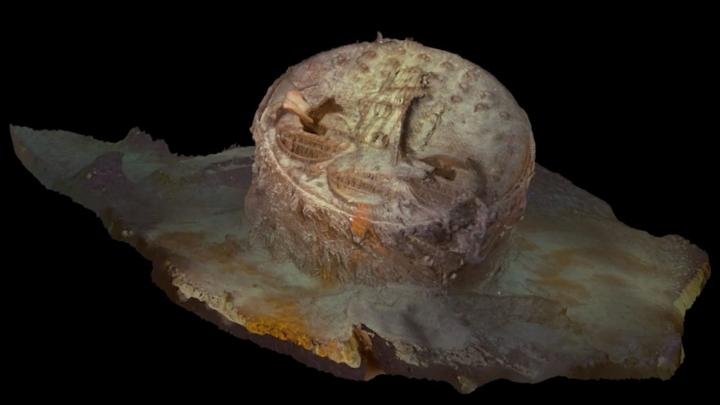 Since the discovery of its wreck site in 1985, the RMS Titanic has captured the imagination of people around the world. Now, RMS Titanic, Inc., an affiliate of Experiential Media Group, LLC. and the salvor-in-possession of RMS Titanic and its wreck site, together with the Advanced Imaging and Visualization Lab (AIVL) at the Woods Hole Oceanographic Institution (WHOI) and Marine Imaging Technologies (Marine Imaging) will join forces to preserve the site for generations to come.

The group will apply advanced underwater imaging technology to monitor and document the wreck while shedding light on natural and human-caused changes to artifacts on the seafloor.

“The RMS Titanic site is one of the best documented deep-sea sites in the world and offers us greater understanding into the processes and ecosystems in the deep sea,” said AIVL Director William Lange. “The value of having so many expeditions to the site over the past 34 years is that we will be able to support a better understanding of the biological and archeological processes that occur there over time.”

The RMS Titanic Survey Data Scientific Study Center will focus on advanced and newly refined research methodologies, including underwater 3D imaging, that will lead to the clearest and most comprehensive data collected to date. In addition, the partners will work with maritime heritage archeologists on management strategies for preserving the wreck site and deliver new ways of viewing RMS Titanic through documentary and museum films, virtual reality (VR), simulator rides, and museum exhibitions.

“This new RMS Titanic leadership team offers a comprehensive approach to monitoring the ship while engaging the global community in our efforts,” said Alexandra Klinghoffer, Vice President of Collections for Experiential Media Group. “Our objective is simple: to utilize the most up to date oceanographic and scientific data, for historical verification, scientific education and public awareness. This collaboration further solidifies these objectives while providing the most up to date records to protect the RMS Titanic wreck site. In addition, this data will help support a broader set of research initiatives related to the current state of deep-sea environments.”

As part of the new center, AIVL and Marine Imaging are collaborating to create high-resolution (near-millimeter scale) 3D interactive models of the Titanic’s bow, stern and other artifacts distributed across the site located more than 4,000 meters (13,000 feet) beneath the surface. To date, AIVL has compiled and processed survey data from RMS Titanic expeditions in 1985, 1986, 1991, 2005, and 2010. This information is helping to improve understanding of structural and environmental changes that have occurred at the wreck site since the ship sank. In addition, this expedition survey data, when combined with RMST’s vast collection of imagery from multiple expeditions to the site, will provide a deeper understanding of the site at the time of discovery and add to forensic time-series studies.

“This is one of the first times that these new modeling techniques have been applied to a wreck site of this size and at such extreme depths,” said Lange. “Using datasets from past expeditions, we hope to create an archeological site map of the RMS Titanic wreck site dating back to the time of discovery, before any human disturbance.”

AIVL and Marine Imaging have already created the first 2D and 3D videos of the wreck site at resolutions greater than HD, including UDHDTV (4K) and 8K (IMAX), which can be made into 2D, 3D, panoramic, and VR production formats for future release to the public.

The new methods will also offer new ways to study objects and features underwater in ways that traditional underwater imaging techniques cannot. The 3D interactive models that result will be used by archeologists to precisely monitor changes to the wreckage and to provide input for long-term management of the site.

“This scientific collaboration not only signifies the next chapter in RMS Titanic’s story but continues our renewed commitment to provide the most technologically advanced and comprehensive research of the wreck site,” said Dr. David Gallo, Director of Special Projects at Experiential Media Group. “Years of thorough study, dedication, and thoughtful collaborations have allowed us to make clear and careful steps towards protecting RMS Titanic for future generations.”

The Woods Hole Oceanographic Institution (WHOI) is a private, non-profit organization on Cape Cod, Massachusetts, dedicated to marine research, engineering, and higher education. Its primary mission is to understand the ocean and its interaction with the Earth as a whole, and to communicate this understanding for the benefit of society. For more information, please visit http://www.whoi.edu.

The Advanced Imaging and Visualization Laboratory (AIVL) develops and operates innovative deep-sea imaging and telemetry systems for use in remotely operated vehicles, autonomous underwater vehicles, manned and unmanned aerial vehicles, diver-operated systems, as well as deep-diving human-occupied vehicles. AIVL’s precision imaging systems have been used all around the world in everything from underwater scientific and archaeological surveys to high-altitude animal health assessments and the documentation of rocket launches. In addition to supporting the scientific community, the imagery collected has been used for educational exhibits in numerous museums, science centers and repurposed for various television and film programs.

RMS Titanic, Inc. (RMST) a subsidiary of Premier Acquisition Holdings LLC and an affiliate of Experiential Media Group, serves as the exclusive steward of RMS Titanic which tragically sank on April 15, 1912. The Company is dedicated to preserving the legacy of the Ship, wreck site and all her passengers and crew. Since 1987, RMS Titanic, Inc. has honorably conducted eight research expeditions to the wreck of RMS Titanic exclusively recovering and conserving more than 5500 artifacts. Utilizing these recovered objects in concert with scientific data and historical research, RMS Titanic, Inc. brings to the general public the celebrated and moving experience Titanic: The Artifact Exhibition. RMS Titanic, Inc. is committed to engaging the global community in RMS Titanic’s story. http://www.rmstitanic.net

Marine Imaging Technologies (Marine Imaging) designs and creates the technology necessary to capture mesmerizing and thought provoking imagery above and below the water. The company was founded by creative professionals and passionate engineers who share the desire to protect the oceans by reaching the core of what makes us human–telling stories and sharing emotions. The vision, imagination, and skills inherent in the team have led to pioneering technology used to inspire and help explain our underwater world.