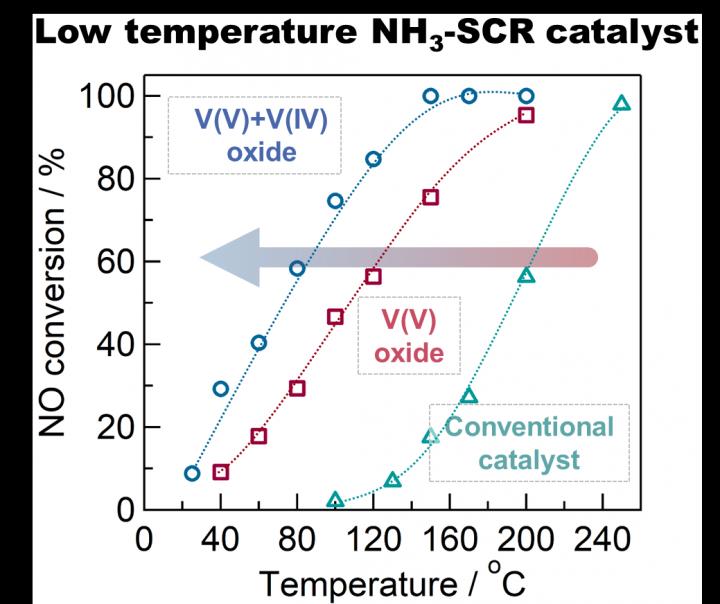 Nitrogen monoxide (NO) and nitrogen dioxide (NO2), or nitrogen oxides (NOx), are common atmospheric pollutants created by burning fossil fuels, coal and natural gas. They are a major cause of photochemical smog and acid rain, which makes their removal from vehicle and factory emissions extremely important. A key technology for removing nitrogen oxides is their reaction with ammonia via selective catalytic reduction (SCR), where NOx is rendered harmless via reduction to nitrogen and water. In particular, vanadium oxides supported on titania are known to have excellent selectivity for conversion to nitrogen, and have been successfully applied to stationary boilers.

However, a significant bottleneck for supported catalysts is the high temperature required for catalytic activity, often 200 to 400 degrees Celsius. This often results in units being placed close to e.g. the boiler in power plants, where they can be easily damaged not only physically by ash but by the accumulation of ammonium sulfates. These deactivating factors can be avoided if the unit is placed downstream after an electrostatic precipitator for removing dust and a desulfation system to remove sulfate deposits. However, this approach requires high catalytic activity at lower temperatures, since the temperature of the exhaust gas has generally dropped to around 100 degrees Celsius by this point. A catalyst is needed that works at lower temperatures.

Now, a team led by Yusuke Inomata and Toru Murayama from Tokyo Metropolitan University have developed a catalyst based on bulk vanadium oxides. Vanadium (V) oxide (V2O5) is a common state of vanadium oxide; the team however successfully synthesized a mixture of vanadium (V) and vanadium (IV) oxides, or “defective” vanadium oxide, by heating a precursor to 270 degrees Celsius. They found that this “defective” catalyst had excellent catalytic activity at temperatures down to 100 degrees Celsius; at this temperature, the speed at which NOx is converted to harmless nitrogen was 10 times faster than conventional titania supported vanadium oxide catalysts, showing exceptional performance where convertional catalysts fall short. The improvement was attributed to the presence of V(IV) which creates “Lewis acid” (electron-accepting) sites, promoting the reaction of nitrogen oxide with ammonia to become nitrogen.

Beyond practical application to industrial catalysis, the team hope that the mechanisms they have uncovered serve as a model system for further scientific studies.

This work was collabolated with the Chugoku Electric Power Company, Incorporated, and was partially supported by the Cooperative Research Program of the Institute for Catalysis, Hokkaido University (Grant #19B1016).

ASU collects 5 solar awards in latest round of DOE funding

A robot with a firm yet gentle grasp

Scienmag Sep 12, 2019
UB engineers develop a dynamic gripper that mimics the adjustable grip of a human hand, an advancement that could…