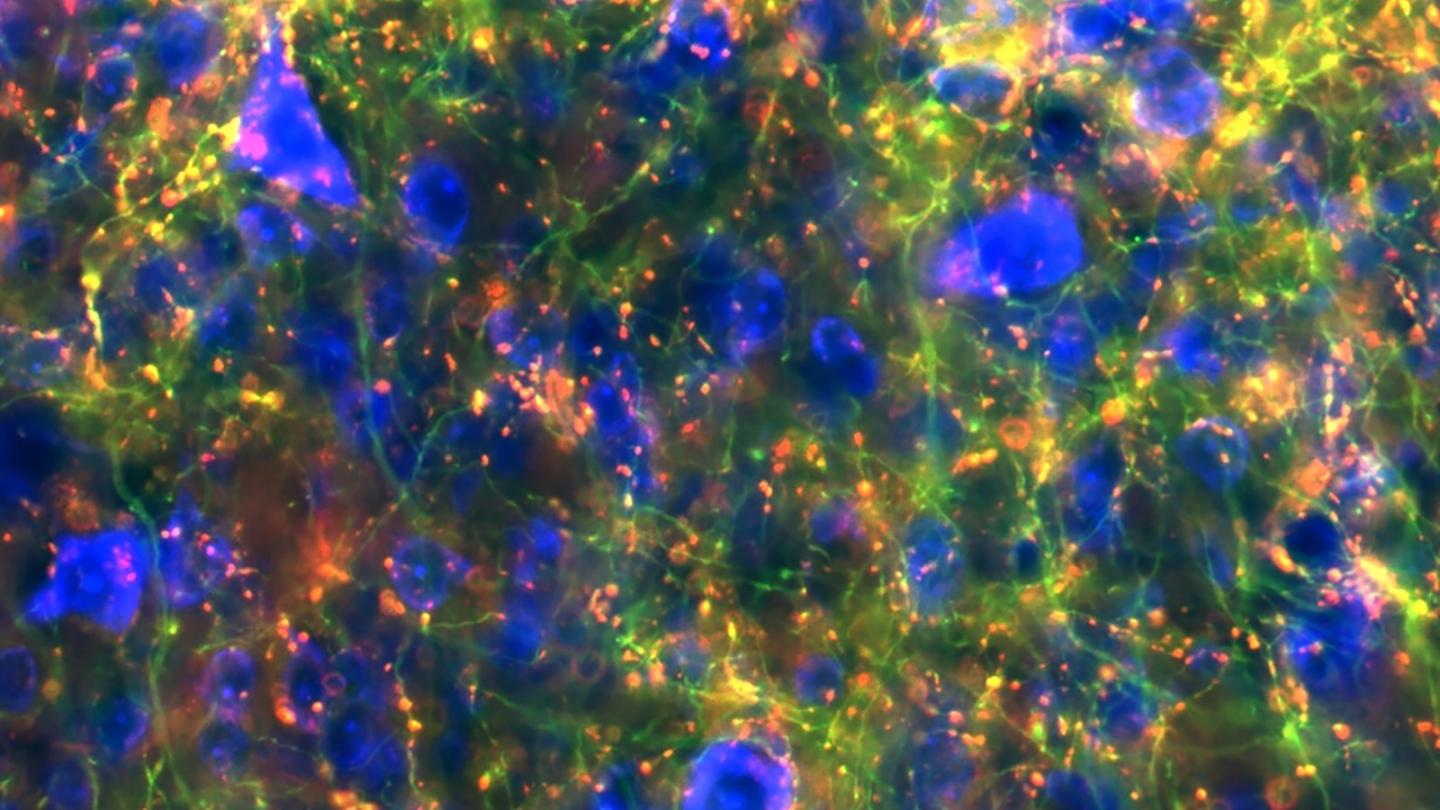 Thousands of our daily activities, from making coffee to taking a walk to saying hello to a neighbor, are made possible through an ancient collection of brain structures tucked away near the center of the cranium.

The cluster of neurons known as the basal ganglia is a central hub for regulating a vast array of routine motor and behavior functions. But when signaling in the basal ganglia is weakened or broken, debilitating movement and psychiatric disorders can emerge, including Parkinson’s disease, Tourette’s syndrome, attention deficit hyperactivity disorder (ADHD) and obsessive-compulsive disorder.

Despite its central importance in controlling behavior, the specific, detailed paths across which information flows from the basal ganglia to other brain regions have remained poorly charted. Now, researchers at the University of California San Diego, Columbia University’s Zuckerman Institute and their colleagues have generated a precise map of brain connectivity from the largest output nucleus of the basal ganglia, an area known as the substantia nigra pars reticulata, or SNr. The findings offer a blueprint of the area’s architecture that revealed new details and a surprising level of influence connected to the basal ganglia.

The results, spearheaded by Assistant Project Scientist Lauren McElvain and carried out in the Neurophysics Laboratory of Professor David Kleinfeld at UC San Diego, and the laboratory of Zuckerman Institute Principal Investigator Rui Costa, are published April 5 in the journal Neuron.

The research establishes a new understanding of the position of the basal ganglia in the hierarchy of the motor system. According to the researchers, the newly identified pathways emerging from the connectivity map could potentially open additional avenues for intervention of Parkinson’s disease and other disorders tied to the basal ganglia.

“With the detailed circuit map in hand, we can now plan studies to identify the specific information conveyed by each pathway, how this information impacts downstream neurons to control movement and how dysfunction in each output pathway leads to the diverse symptoms of basal ganglia diseases,” said McElvain.

With support from the NIH’s Brain Research through Advancing Innovative Neurotechnologies® (BRAIN) Initiative, the researchers developed the new blueprint working in mice by applying a modern neuroscience toolset that combines techniques from genetics, virus tracing, automated microscopic imaging of whole-brain anatomy and image processing. The results revealed surprising new insights about the breadth of connections.

“These results are an example of how researchers supported by the BRAIN Initiative are using the latest brain mapping tools to change in a fundamental way our understanding of how the connections in the brain’s circuits are organized,” said John J. Ngai, director of the NIH’s BRAIN Initiative.

Previous work had emphasized that the basal ganglia architecture is dominated by a closed-loop with output projections connecting back to input structures. The new study reveals the SNr broadcasts even to lower levels of the motor and behavior system. This includes a large set of brainstem regions with direct connections to the spinal cord and motor nuclei that control muscles via a small number of intervening connections.

“The new findings led by Dr. McElvain offer an important lesson in motor control,” said Kleinfeld, a professor in the Division of Biological Sciences (Section of Neurobiology) and Division of Physical Sciences (Department of Physics). “The brain does not control movement though a hierarchy of commands, like the ‘neural networks’ of self-driving cars, but through a scheme of middle management that directs motor output while informing the executive planners.”

Remarkably, according to the researchers, the SNr neurons that project to the low levels of the motor system have branched axons that simultaneously project back up to the brain regions responsible for higher-order control and learning. In this way, the newly described connectivity of SNr neurons fundamentally links operations across high and low levels of the brain.

“The fact that specific basal ganglia output neurons project to specific downstream brain nuclei but also broadcast this information to higher motor centers has implications for how the brain chooses which movements to do in a particular context, and also for how it learns about which actions to do in the future,” said Costa, a professor of neuroscience and neurology at Columbia’s Vagelos College of Physicians and Surgeons, as well as director and chief executive officer of the Zuckerman Institute.

Contributors to the study include Byungkook Lim and Brenda Bloodgood at UC San Diego, Jeffrey Moore at Harvard, Yuncong Chen at NEC Laboratories America and G. Stefano Brigidi, now at the University of Utah School of Medicine.