Australian-US researchers have developed a new blood test that could revolutionise how chemotherapy is used for colon cancer, by identifying the patients that need chemo and those that can be safely spared treatment.

More than 450 patients and over 20 hospitals from across Australia were involved in the world-first clinical trial, which investigated the blood test as a promising aid to cancer treatment decision-making. 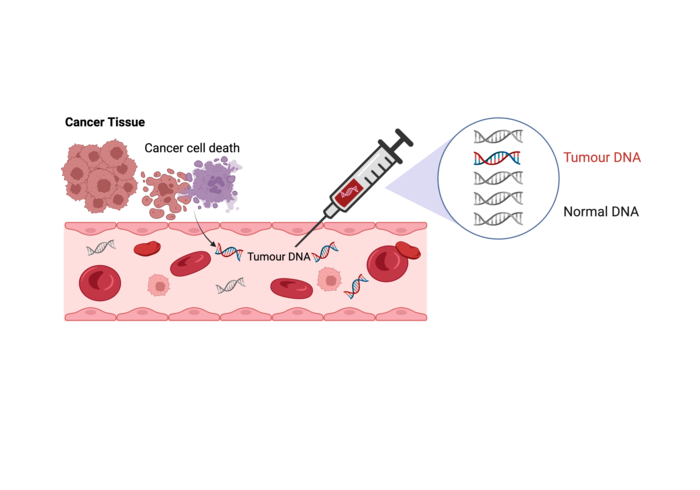 Australian-US researchers have developed a new blood test that could revolutionise how chemotherapy is used for colon cancer, by identifying the patients that need chemo and those that can be safely spared treatment.

More than 450 patients and over 20 hospitals from across Australia were involved in the world-first clinical trial, which investigated the blood test as a promising aid to cancer treatment decision-making.

The study, co-led by WEHI in Melbourne, Australia and the Johns Hopkins Kimmel Cancer Centre in the US, found the test could accurately predict which patients would benefit from chemotherapy after their cancer is surgically removed.

Stage II colon cancer is defined as a cancer that has grown through the wall of the colon, but does not extend to the lymph nodes or other organs. Nearly 4,000 Australians are diagnosed with it each year.

The test assesses levels of circulating tumour DNA (ctDNA) – genetic material shed from tumours into the bloodstream. The findings from this landmark study, published in The New England Journal of Medicine, could revolutionise chemotherapy treatment for colon cancer patients and fast-track the development of new drug targets.

The goal of chemotherapy when given after colon cancer surgery is to eradicate micrometastases – cancer cells that have travelled from the original cancer in the bowel through the bloodstream to deposit in another site, such as the liver.

These deposits of cancer cells are miniscule and are not seen at surgery or on radiologic images during the initial stages. However, they will gradually increase in size and become large enough to be seen on a standard CT scan if they are not treated with chemotherapy.

The novel blood test, co-developed by WEHI, can detect these invisible cells that release tiny amounts of ctDNA into the bloodstream, enabling researchers to identify which patients should be offered chemotherapy based on whether micrometastases has been detected.

Associate Professor Jeanne Tie – a clinician scientist at WEHI and a medical oncologist at the Peter MacCallum Cancer Centre – said the DYNAMIC study solved a significant health barrier that has been intensely researched for decades: how experts can decide which patients should be recommended for chemotherapy and which patients can safely avoid the treatment.

“Our trial has conclusively shown how the ctDNA blood test can be used to direct post-surgical therapy in stage II colon cancer and substantially reduce the number of patients treated with chemotherapy, without impacting the risk of cancer relapse,” Associate Professor Tie said.

“We found that when a patient’s blood test does not reveal ctDNA after colon surgery, the likelihood of micrometastases is very low and chemotherapy can be avoided as there are no tumour fragments left to kill.”

The findings are globally significant as previously there was no way of determining whether all the cancer had been removed through colon surgery. “While chemotherapy can be essential and lifesaving, many patients are receiving the treatment and its associated toxicities without any benefit,” Associate Professor Tie said.

“This ctDNA blood test could be used to spare around 600 Australians and over 100,000 people worldwide from unnecessary chemo treatments each year.”

While previous studies have suggested ctDNA measurements could be used to determine the risk of cancer recurrence, the DYNAMIC study is the first randomised study in the world to provide the clinical evidence required to move this from a promising blood test to one that should be routinely used in clinical practice.

Co-lead author Professor Peter Gibbs said the study would not have been possible without the 23 Australian hospitals that enrolled 455 patients for the multi-centre trial since 2015.

“The collaborative efforts from these hospitals were critical for us to complete this trial, the first randomised trial in any solid tumor type worldwide that used a blood test to determine which patients can safely forgo chemotherapy after surgery,” Associate Professor Gibbs said.

“Randomised studies like this are needed to deliver meaningful patient outcomes, but they are not possible without the support of our collaborators and philanthropic efforts.”

Victoria’s Western Health hospital contributed the largest number of patients for the trial, while Peter McCallum Cancer Centre was the lead clinical site.

Researchers hope to demonstrate the value of ctDNA-informed treatment in other stages of colon cancer and other cancer types, including pancreas and ovarian cancer, with three additional randomised studies already underway.

“Our ctDNA test can be used to reduce the physical and financial toxicity brought on by unnecessary chemo treatments and believe our findings bring us closer to significantly improving treatment options for many patients across a broad range of cancer types,” Professor Gibbs said.