New assessment of gas locked in ice in European waters 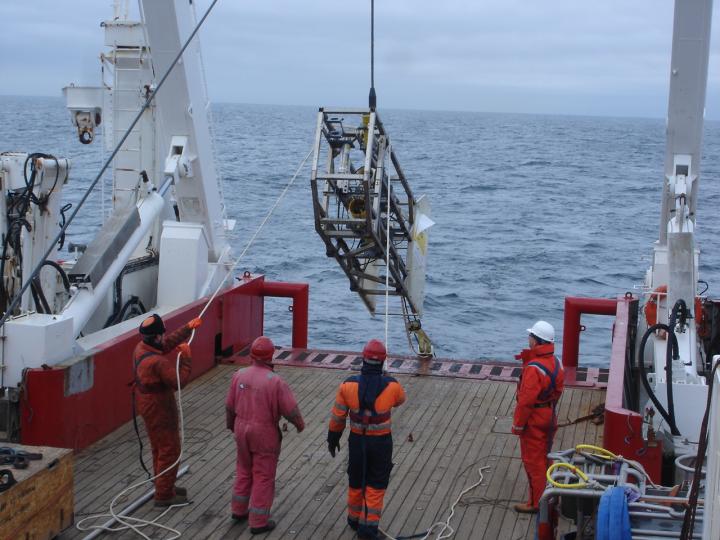 A study led by the University of Southampton has mapped several sites in Europe containing gas hydrate – a relatively clean fuel which could help bridge the gap between fossil fuels and renewables.

Vast amounts of natural gas are stored in an ice-like form beneath the seabed, under the deep seafloor, close to edge of the landmasses that form our continents. This gas hydrate, sometimes known as ‘ice that burns’, has the potential to play a role as a substitute for coal in the coming decades, until there is sufficient renewable energy to meet society’s demands.

This new inventory of gas hydrate deposits was undertaken as part of MIGRATE (Marine Gas Hydrates: An Indigenous Resource of Natural Gas for Europe), a project funded by the European Commission and led by the GEOMAR Helmholtz Centre for Ocean Research, Kiel.

The research showed there are direct or indirect indications of the presence of hydrate at several European sites, including off the west and east coasts of Greenland, on and around the Arctic archipelago of Svalbard (Barents Sea), off central Norway and west of Ireland. It is also present in the eastern Mediterranean Sea, the Sea of Marmara and the Black Sea.

Professor Tim Minshull of the University of Southampton, who led a 31 strong-team from 14 countries, said: “We found that gas hydrate is particularly widespread around Svalbard, off Norway and in the Black Sea, but the hydrate systems have only been well investigated in a few areas, so there could be much still to discover.

“Exploiting gas hydrate deposits safely and efficiently presents challenges, for example, converting the hydrate to gas without using up too much energy. But several large feasibility projects are exploring these and other factors.”

The study authors point out that having this hydrate inventory may also be important for more acute environmental reasons. If oceans warm due to climate change, hydrate may naturally melt, releasing methane which could change the chemical balance of the oceans. Mapping where this might happen will help scientists to monitor progress.

The results of this study, which incorporates work from the Southampton PhD theses of Sudipta Sarkar, Bedanta Goswami and Eric Attias and involved collaboration with Dr Hector Marín-Moreno of the National Oceanography Centre, Southampton, are published in the international journal Marine and Petroleum Geology.

1) Hydrate occurrence in Europe: A review of available evidence is published in the journal Marine Petroleum and Geology, DOI: 10.1016/j.marpetgeo.2019.08.014

2) The University of Southampton drives original thinking, turns knowledge into action and impact, and creates solutions to the world’s challenges. We are among the top 100 institutions globally (QS World University Rankings 2019). Our academics are leaders in their fields, forging links with high-profile international businesses and organisations, and inspiring a 22,000-strong community of exceptional students, from over 135 countries worldwide. Through our high-quality education, the University helps students on a journey of discovery to realise their potential and join our global network of over 200,000 alumni. http://www.southampton.ac.uk