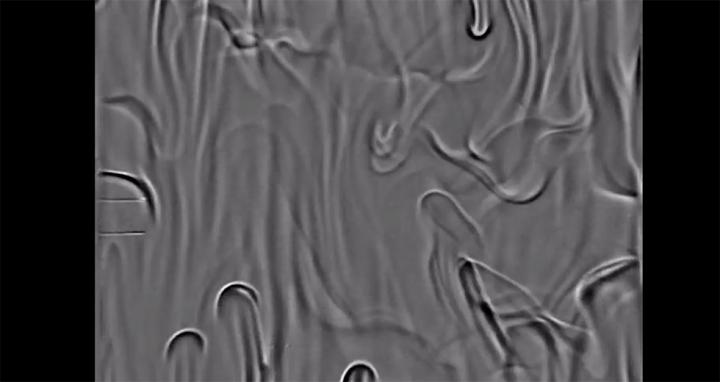 PROVIDENCE, RI [Brown University] — Researchers from Tsinghua University and Brown University have discovered a simple way to give a major boost to turbulent heat exchange, a method of heat transport widely used in heating, ventilation and air conditioning (HVAC) systems.

In a paper published in Nature Communications, the researchers show that adding a readily available organic solvent to common water-based turbulent heat exchange systems can boost their capacity to move heat by 500%. That’s far better than other methods aimed at increasing heat transfer, the researchers say.

“Other methods for increasing heat flux — nanoparticle additives or other techniques — have achieved at best about 50% improvement,” said Varghese Mathai, a postdoctoral researcher at Brown and co-first author of the study, who worked with Chao Sun, a professor at Tsinghua who conceived of the idea. “What we achieve here is 10 times more improvement than other methods, which is really quite exciting.”

Turbulent heat exchangers are fairly simple devices that use the natural movements of liquid to move heat. They consist of a hot surface, a cold surface and tank of liquid in between. Near the hot surface, the liquid heats up, becomes less dense and forms warm plumes that rise toward the cold side. There, the liquid loses its heat, becomes denser and forms cold plumes that sink back down toward the hot side. The cycling of water serves to regulate the temperatures of each surface. This type of heat exchange is a staple of modern HVAC systems widely used in home heaters and air conditioning units, the researchers say.

In 2015, Sun had the idea to use an organic component known as hydrofluoroether or HFE to speed the cycling of heat inside this kind of exchanger. HFE is sometimes used as the sole fluid in heat exchangers, but Sun suspected that it might have more interesting properties as an additive in water-based systems. Working with the study’s co-first author Ziqi Wang, Mathai and Sun experimented with adding small amounts of HFE and, after three years of work, were able to maximize its effectiveness in speeding heat exchange. The team showed that concentrations of around 1% HFE created dramatic heat flux enhancements up to 500%.

Using high-speed imaging and laser diagnostic techniques, the researchers were able to show how the HFE enhancement works. When near the hot side of the exchanger, the globules of HFE quickly boil, forming biphasic bubbles of vapor and liquid that rise rapidly toward the cold plate above. At the cold plate, the bubbles lose their heat and descend as liquid. The bubbles affect the overall heat flux in two ways, the researchers showed. The bubbles themselves carry a significant amount of heat away from the hot side, but they also increase the speed of the surrounding water plumes rising and falling.

“This basically stirs up the system and makes the plumes move faster,” Sun said. “Combined with the heat that the bubbles themselves carry, we get a dramatic improvement in heat transfer.”

That stirring action could have other applications as well, the researchers say. It could be useful in systems designed to mix two or more liquids. The extra stir makes for faster and more complete mixing.

The researchers pointed out that the specific additive they used — HFE7000 — is non-corrosive, non-flammable and ozone friendly. One limitation is that the approach only works on vertical heat exchange systems — ones that move heat from a lower plate to an upper one. It doesn’t currently work on side-to-side systems, though the researchers are considering ways to adapt the technique. Still, vertical exchangers are widely used, and this study has shown a simple way to improve them dramatically.

“This biphasic approach generates a very large increase in heat flux with minimal modifications to existing heating and cooling systems,” Mathai said. “We think this has great promise to revolutionize heat exchange in HVAC and other large-scale applications.”

From greenhouse gas to fuel

US infrastructure unprepared for increasing frequency of extreme storms