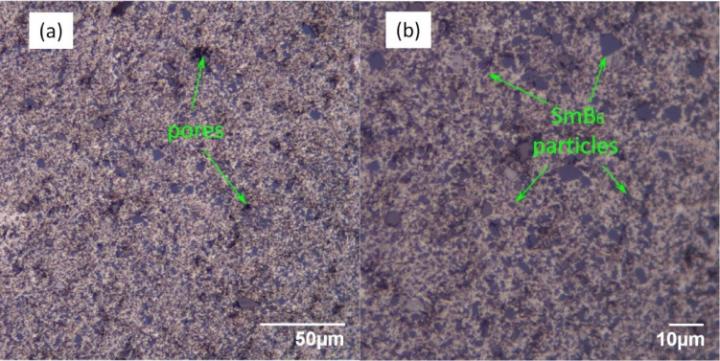 Precision or invar alloys have been developed by scientists for many centuries. These iron and nickel-based alloys are capable of keeping their size unchanged within a given range of temperatures. Because of this, they are used in the manufacture of precision gages, standards of length, details for mechanical dial plates, and similar devices. However, invar alloys lack many other useful physical characteristics, and this limits their use in other areas, for example, those that require high thermal conductivity of materials. Therefore, scientists have long been trying to create a unique composite material based on other metals that would combine thermal expansion typical for invar alloys with additional physical properties.

A team of researchers from BFU suggested their approach to this issue. To develop a new composite material, they used a traditional method based on the reduction of heat expansion of functional materials. In the course of this technique, ceramic or other particles are added to the initial metal. Compared to the metal, the particles have considerably lower heat expansion. This time, the scientists added an intermediary valence compound to the mix. Unlike integral valence elements, such compounds can have anomalous properties: for example, some of them can shrink when heated. Moreover, the level of such shrinkage can be regulated. Composites based on a metal and an intermediate valence system allow one to manage their thermal expansion and to bring it down to almost zero. This considerably widens the range of their applications.

In their study, the team used aluminum and samarium hexaboride. Although these substances are widely known, it was the first time they were combined together. To obtain the composite, the components in powder form were hot-pressed. After that, the team studied the result with an optical microscope and used X-ray tomography to diagnose the internal structure of the sample without additional polishing and finishing. Using layer-by-layer scanning, the scientists developed a 3D model of the new substance and found out that samarium hexaboride particles were evenly distributed in aluminum. This confirmed that the composite was fit for further studies. To measure its heat expansion, the team used capacitive dilatometry within the temperature range of 10-210 ?. The sample had zero heat expansion at 45 ? and demonstrated invar behavior up to 60 K.

“Our work is the first in its field, and we are not ready to consider scaling to the industrial level yet. Currently, we are focused on specific problems that require unique solutions. The issue of reducing the heat expansion of functional materials by means of adding small particles of low or zero expansion substances has been relevant in the instrument-making industry, radio electronics, aviation, and space industry, as well as in laser and cryogen technologies for many years,” said Dmitry Serebrennikov, a Candidate of Physical and Mathematical Sciences, and a research associate at the Laboratory for Strongly Correlated Electron Systems, Science and Research Center “Functional Nanomaterials” at BFU.