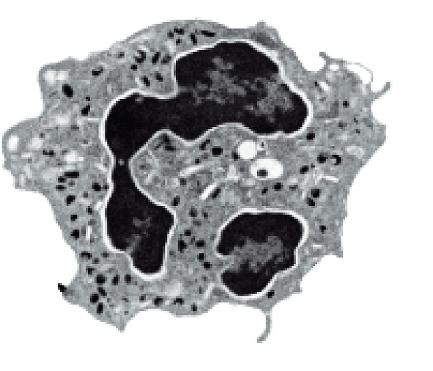 Curing disease with neutrophils; this is the goal of the NeutroCure project. How will that work? “Neutrophils have a yin yang character,” explained Andrés Hidalgo, whose team at the Centro Nacional de Investigaciones Cardiovasculares (CNIC) is one of six member groups participating in this project coordinated by Andriy Mokhir Friedrich from Alexander University, Germany. “Neutrophils are ‘good’ cells because they destroy bacteria and other microbes that enter the organism, but they are also ‘bad’ cells because they are unspecific, meaning they can also destroy neighbouring healthy cells.”

NeutroCure focuses on reactive oxygen species (ROS) produced by neutrophils. In healthy organisms, ROS play crucial roles, such as signaling to regulate cell growth, providing the trigger for the formation of neutrophil extracellular traps (NET), and modulation of inflammation. However, high ROS concentrations damage tissues, and nature has therefore evolved precise mechanisms to control ROS duration and concentration and to ensure that these molecules remain confined to locations close to their targets.

Disruption of these mechanisms causes aberrant ROS production, leading to uncontrolled inflammation. This occurs for example during myeloablation triggered by radiotherapy or chemotherapy, and is a key characteristic of the phenotype of cancer cells and autoimmunity.

Despite the damaging properties of ROS, drugs that amplify ROS production can revert (‘cure’) many features of disease. Hidalgo described how this paradox underlies the ability of ROS to “inhibit tumor growth by inducing cancer-cell death, contribute to the resolution of inflammation by disactivating T cells and NET formation, and alleviate myeloablation by increasing hematopoiesis.”

According to the coordinator of the project, Ajndriy Mokhir, “the NeutroCure project will be the first attempt to find an innovative solution to this problem. The consortium will develop safe ROS amplifiers that can increase ROS levels specifically near neutrophils associated with cancer or pathogenic inflammation without affecting healthy cells. The technology may also be applicable to the treatment of myeloablation.”

Neutrophils act like ‘chemical bombs’ because, among other properties, they produce highly reactive substances that, when they enter a microbe, destroy it. “These bombs act like a kind of bleach: nonspecific but very effective,” said Andrés Hidalgo.

The goal of NeutroCure is to ensure that these substances are selective and controlled. To achieve this, the consortium members focus on the protein elastase, which is specific to neutrophils. The team has designed a ‘chemical cage’ that opens to ‘release’ ROS only when elastase is in highly defined anatomical locations and contexts.

The project will assess this approach in models of inflammatory disease, such as arthritis, multiple sclerosis, autoimmune neuritis, lupus, and psoriasis.

The NeutroCure consortium includes six academic member groups and a private company that will steer the commercialization of new medication developed in the project. The consortium members anticipate that NeutroCure will have a major societal impact by providing new treatments for severe disorders caused by the dysregulated production of ROS.

Graphene takes off in composites for planes and cars