Neuroscientists reveal how the brain can enhance connections 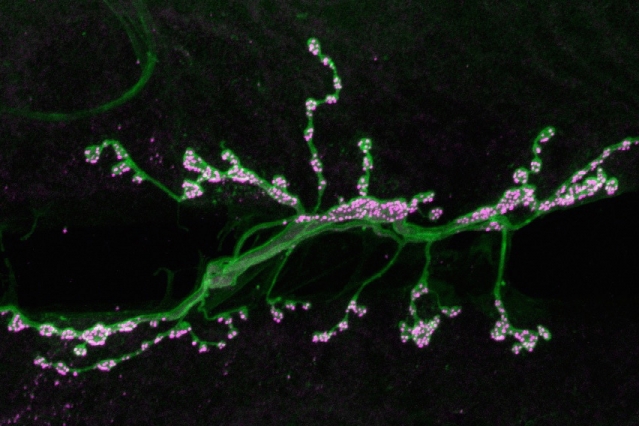 Motor neurons (green) form synapses (highlighted in magenta) on muscle fibers in a fruit fly. MIT neuroscientists have discovered a pathway that contributes to strengthening these synapses.

When the brain forms memories or learns a new task, it encodes the new information by tuning connections between neurons. MIT neuroscientists have discovered a novel mechanism that contributes to the strengthening of these connections, also called synapses.

“This mechanism that we’ve uncovered on the presynaptic side adds to a toolkit that we have for understanding how synapses can change,” says Troy Littleton, a professor in the departments of Biology and Brain and Cognitive Sciences at MIT, a member of MIT’s Picower Institute for Learning and Memory, and the senior author of the study, which appears in the Nov. 18 issue of Neuron.

Learning more about how synapses change their connections could help scientists better understand neurodevelopmental disorders such as autism, since many of the genetic alterations linked to autism are found in genes that code for synaptic proteins.

Richard Cho, a research scientist at the Picower Institute, is the paper’s lead author.

One of the biggest questions in the field of neuroscience is how the brain rewires itself in response to changing behavioral conditions — an ability known as plasticity. This is particularly important during early development but continues throughout life as the brain learns and forms new memories.

Over the past 30 years, scientists have found that strong input to a postsynaptic cell causes it to traffic more receptors for neurotransmitters to its surface, amplifying the signal it receives from the presynaptic cell. This phenomenon, known as long-term potentiation (LTP), occurs following persistent, high-frequency stimulation of the synapse. Long-term depression (LTD), a weakening of the postsynaptic response caused by very low-frequency stimulation, can occur when these receptors are removed.

Scientists have focused less on the presynaptic neuron’s role in plasticity, in part because it is more difficult to study, Littleton says.

His lab has spent several years working out the mechanism for how presynaptic cells release neurotransmitter in response to spikes of electrical activity known as action potentials. When the presynaptic neuron registers an influx of calcium ions, carrying the electrical surge of the action potential, vesicles that store neurotransmitters fuse to the cell’s membrane and spill their contents outside the cell, where they bind to receptors on the postsynaptic neuron.

The presynaptic neuron also releases neurotransmitter in the absence of action potentials, in a process called spontaneous release. These “minis” have previously been thought to represent noise occurring in the brain. However, Littleton and Cho found that minis could be regulated to drive synaptic structural plasticity.

To investigate how synapses are strengthened, Littleton and Cho studied a type of synapse known as neuromuscular junctions, in fruit flies. The researchers stimulated the presynaptic neurons with a rapid series of action potentials over a short period of time. As expected, these cells released neurotransmitter synchronously with action potentials. However, to their surprise, the researchers found that mini events were greatly enhanced well after the electrical stimulation had ended.

“Every synapse in the brain is releasing these mini events, but people have largely ignored them because they only induce a very small amount of activity in the postsynaptic cell,” Littleton says. “When we gave a strong activity pulse to these neurons, these mini events, which are normally very low-frequency, suddenly ramped up and they stayed elevated for several minutes before going down.”

The enhancement of minis appears to provoke the postsynaptic neuron to release a signaling factor, still unidentified, that goes back to the presynaptic cell and activates an enzyme called PKA. This enzyme interacts with a vesicle protein called complexin, which normally acts as a brake, clamping vesicles to prevent release neurotransmitter until it’s needed. Stimulation by PKA modifies complexin so that it releases its grip on the neurotransmitter vesicles, producing mini events.

“Typically you have 70 or so of these boutons per cell, but if you stimulate the presynaptic cell you can grow new boutons very acutely. It will double the number of synapses that are formed,” Littleton says.

The researchers observed this process throughout the flies’ larval development, which lasts three to five days. However, Littleton and Cho demonstrated that acute changes in synaptic function could also lead to synaptic structural plasticity during development.

“Machinery in the presynaptic terminal can be modified in a very acute manner to drive certain forms of plasticity, which could be really important not only in development, but also in more mature states where synaptic changes can occur during behavioral processes like learning and memory,” Cho says.

The study is significant because it is among the first to reveal how presynaptic neurons contribute to plasticity, says Maria Bykhovskaia, a professor of neurology at Wayne State University School of Medicine who was not involved in the research.

“It was known that the growth of neural connections was determined by activity, but specifically what was going on was not very clear,” Bykhovskaia says. “They beautifully used Drosophila to determine the molecular pathway.”

Littleton’s lab is now trying to figure out more of the mechanistic details of how complexin controls vesicle release.