A University of Texas at Dallas researcher is leading a team of national experts in a new National Institutes of Health multicenter project focused on elucidating the origins of pain. 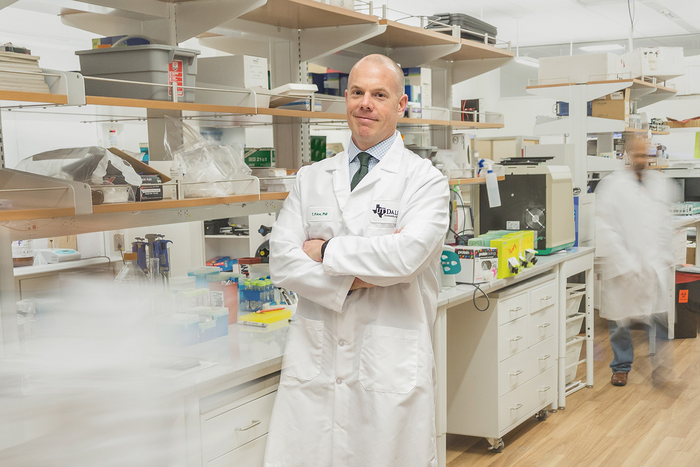 A University of Texas at Dallas researcher is leading a team of national experts in a new National Institutes of Health multicenter project focused on elucidating the origins of pain.

Dr. Ted Price BS’97, Ashbel Smith Professor of neuroscience in the School of Behavioral and Brain Sciences, received a five-year, $11.3 million grant from the National Institute of Neurological Disorders and Stroke to launch the Human Nociceptor and Spinal Cord Molecular Signature Center. Researchers will focus on expanding knowledge about the genesis of human pain at the cellular and molecular level, with the goal of finding new approaches to treat pain.

“The data we will generate on the cells that comprise the first part of the human pain pathway will fundamentally change the way that we think about pain and how we develop therapeutics,” said Price, who is the founding director of the Center for Advanced Pain Studies (CAPS) at UT Dallas.

Price’s co-principal investigators are Dr. Patrick M. Dougherty, H.E.B. Professor in Cancer Research in the Department of Pain Medicine at UT MD Anderson Cancer Center, and Dr. Michele Curatolo, director of the interventional pain program at University of Washington Medicine in Seattle. Working both independently and collaboratively, all three have used human dorsal root ganglia (DRG) — specialized nerve cells clustered near the base of the spine — to understand mechanisms that cause chronic pain.

“It’s really exciting to work with these other great groups on what is a very new kind of project for the pain field,” Price said. “I don’t think there’s ever been a big project quite like this — aimed at describing the human pain system at this level of detail.”

Price and his UTD team have previously documented the transcriptome of human DRG cells — a chart of the messenger RNA (mRNA) molecules produced by those cells. That work has revealed unique features of the human nervous system at the single neuron level, helping elucidate why pain relief solutions in animal models work infrequently in people.

“While we may understand pain pretty well in animals at this point, we don’t understand why that information translates — or fails to translate — to humans,” he said. “The point of this initiative is to gain fundamental understanding of why that animal work isn’t translating and to use that information to do a better job of developing pain therapeutics that can stop pain at its source.”

Researchers will study DRG tissue from organ donors to characterize the neurons of the peripheral nervous system and learn how nociceptors — the part of a nerve cell that responds to pain stimuli — are activated in chronic pain disorders. They also will use the tissue samples to understand better how neurons communicate signals along the human pain pathway between nociceptors that innervate tissues in the body and spinal cord neurons that send signals to the brain.

“My hope is that in the next five years, we will have very detailed molecular information about the human peripheral nervous system — how it changes with age, and, hopefully, how it changes with chronic pain,” he said. “I also hope that we’ll understand how pathology in the lower back interacts with the peripheral nervous system to cause low back pain, a severe problem that many people have.”

A project already underway at CAPS is focused specifically on low back pain. Researchers are comparing DRG and other samples from people who have back-related surgeries with other data to understand the mechanisms that drive low back pain.

Price said a better understanding of how the spinal cord relays pain signals received from nociceptors to the brain will aid in finding pharmacological solutions for chronic pain.

“We know some things now, but not nearly as much as we should. I think we’ll have fine molecular detail that will inspire many new projects on drug targets that could lead to a true next generation of pain therapeutics,” he said.

Price said an important goal of the new center is to establish the scientific foundation that will empower pain researchers around the world to approach the problem of treating pain in a new way.

“It’s our mission to disseminate data as comprehensively and as quickly as we can so that it becomes a foundational community resource for the field,” he said. “We’re proud to take on that huge responsibility.”