New extreme-precision instrument on track to find and ‘weigh’ exoplanets 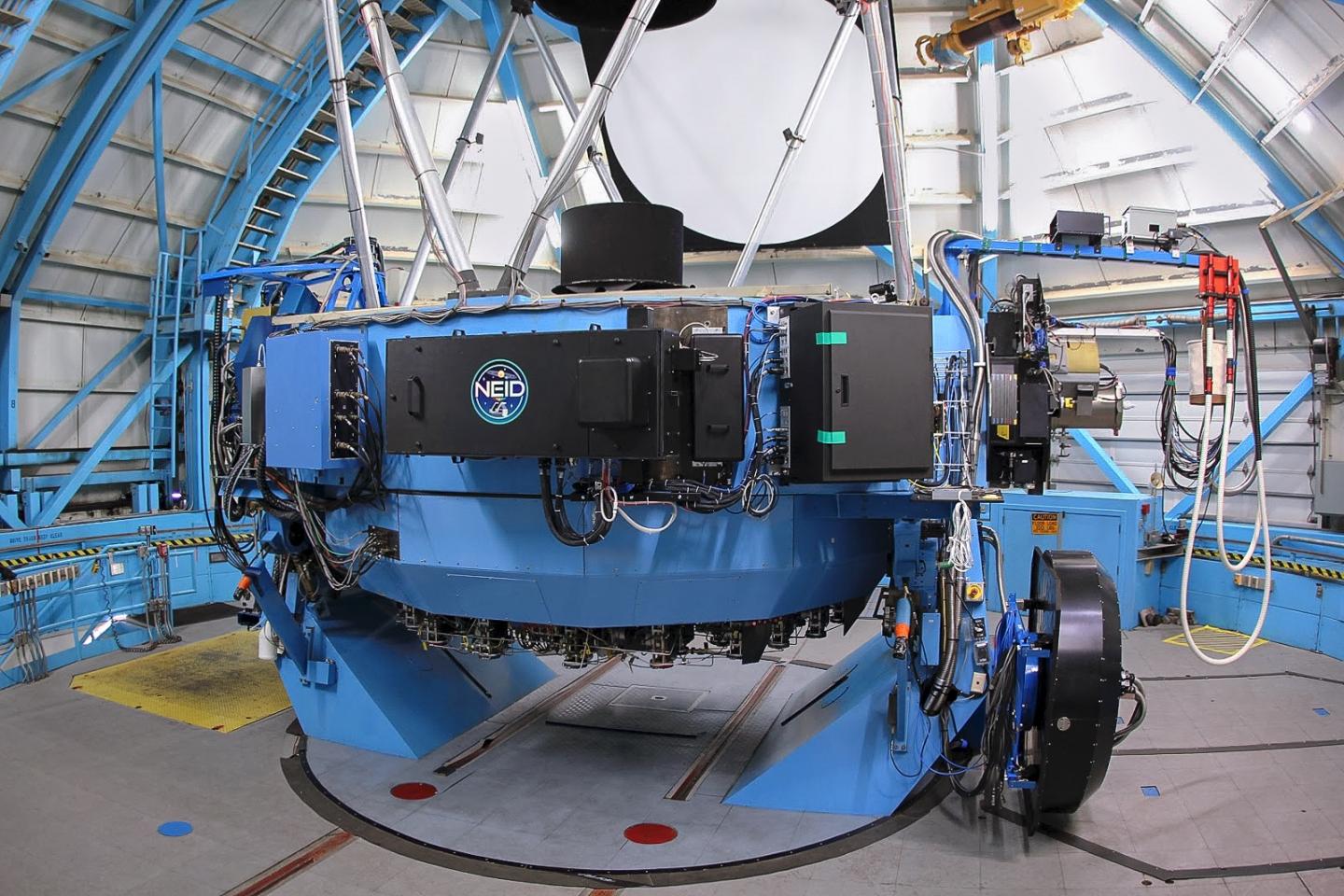 The new NEID instrument, now installed at the 3.5-meter WIYN telescope at Kitt Peak National Observatory in Southern Arizona, USA, has made its first observations. The NSF-NASA funded instrument is designed to measure the motion of nearby stars with extreme precision — roughly three times better than the previous generation of state-of-the-art instruments — allowing us to detect, determine the mass of, and characterize exoplanets as small as Earth.

The announcement of first light was made at a press conference held today at the 235th meeting of the American Astronomical Society.

NEID detects exoplanets by measuring the subtle effect these planets have on their parent stars. Planets tug gravitationally on the star they orbit, producing a small “wobble” — a periodic shift in the velocity of the star. This happens in our own Solar System — Jupiter causes the Sun to move at roughly 47 km/hour (about 29 miles per hour: faster than record-breaking sprinter Usain Bolt!), whereas the Earth causes a sedate movement with a speed of only 0.3 km/hour (about 0.2 miles per hour). The size of the wobble is proportional to an orbiting planet’s mass, meaning NEID measurements can be used to determine the masses of exoplanets. Current instruments can measure speeds as low as 3.5 km/hour (just over 2 miles per hour: a slow walking pace), but NEID was built to detect even lower speeds — potentially uncovering Earth-mass exoplanets.

“In the last decade the state of the art has been roughly 3.5 km/hour,” explains Jason Wright, NEID Project Scientist at Penn State University. “NEID is expected to reach 1 km/hour, pushing the envelope to higher precision.” [2]

Already an impressive exoplanet-hunting machine, NEID becomes even more powerful in partnership with space observatories, such as the Transiting Exoplanet Survey Satellite.

“When we combine future NEID observations with data from spacecraft, things will really get interesting, and we will be able to learn what planets are made of,” continues Wright. “We will know the planet’s density, which is a clue to understanding how much of an atmosphere the planet has; is it gaseous like Saturn, an ice giant like Neptune, rocky like Earth, or something in between — a super-Earth or sub-Neptune?”

To allow NEID to make these measurements requires extreme precision — and an equally extreme instrument. Starlight collected by the WIYN telescope is fed by an optical fiber to a purpose-built thermal enclosure encasing the NEID instrument. To ensure that NEID measurements remain stable over the instrument’s five-year lifetime, its optics are held at a fixed temperature that is stable to within a thousandth of a degree.

NEID’s first-light observations targeted the star 51 Pegasi, the first sun-like star found, in 1995, to host an exoplanet. “First light is an important milestone in an instrument’s development,” said Wright. “It is the first verification that NEID is measuring starlight as expected and is on its way to full functionality.”

NEID’s capabilities are particularly impressive given how quickly the instrument went from the drawing board to first light. “The short development time of NEID is remarkable,” explains Jayadev Rajagopal of NSF’s OIR Lab, the WIYN telescope scientist and head of operations. “The NEID team has delivered a next-generation instrument in just 3 years and 9 months.”

While NEID is designed to study exoplanets, it must contend with the small-scale motion of the churning plasma at the surfaces of stars which creates signals that can mask or even mimic planetary signals — a challenge that excites stellar astrophysicists. NEID’s scientific output will be further increased by making the instrument widely available to astronomers, in contrast to other precision radial velocity spectrometers.

“One of the unique aspects of NEID is that it is available for use by all astronomers, in line with the mission of NSF’s OIR Lab,” explains Sarah Logsdon, the NEID Instrument Scientist at NSF’s OIR Lab. With a wider pool of astronomers using NEID to try out a broad range of ideas, the team expects that their spectrograph may prove to be one of the most scientifically productive.

Suvrath Mahadevan, Professor of Astronomy & Astrophysics at Penn State and Principal Investigator of NEID elaborates: “The NEID project offers the opportunity to work with a talented and dynamic team, to train the next generation of experimentalists, and to develop a discovery machine that all astronomers can apply to use, regardless of nationality, institution or rank.”

Exoplanets discovered with NEID will help identify targets for follow-up observations with upcoming facilities like the NASA/ESA/CSA James Webb Space Telescope, which will be able to detect and characterize the atmospheres of transiting exoplanets. This makes NEID an important part of the ongoing search for other earths, and takes us one step closer to determining if there are truly Earth-like planets elsewhere in the Milky Way.

[1] NEID takes its name from the Tohono O’odham word meaning “to see.” NEID is also a nested acronym for NN-EXPLORE Exoplanet Investigations with Doppler spectroscopy. The Name NEID was selected after consultation with the Tohono O’odham Nation.

NSF’s National Optical-Infrared Astronomy Research Laboratory, the US center for ground-based optical-infrared astronomy, operates the international Gemini Observatory, Kitt Peak National Observatory (KPNO), Cerro Tololo Inter-American Observatory (CTIO), the Community Science and Data Center (CSDC), and the NSF Vera C. Rubin Observatory (VRO). It is managed by the Association of Universities for Research in Astronomy (AURA) under a cooperative agreement with NSF and is headquartered in Tucson, Arizona. The astronomical community is honored to have the opportunity to conduct astronomical research on Iolkam Du’ag (Kitt Peak) in Arizona, on Maunakea in Hawai’i, and on Cerro Tololo and Cerro Pachón in Chile. We recognize and acknowledge the very significant cultural role and reverence that these sites have to the Tohono O’odham Nation, to the Native Hawaiian community, and to the local Communities in Chile, respectively.

The NEID instrument is funded by the joint NASA/NSF Exoplanet Exploration Program, NN-EXPLORE.

Department of Astronomy and Astrophysics

Scienmag Jul 1, 2019
Credit: Mark Stone/University of Washington Telepathic communication might be one step closer to reality thanks to…