A majority of Georgia residents strongly support new solar and wind power capacity over new coal-fired plants and believe the state should set a carbon emissions reduction goal, according to a new survey conducted for researchers at Georgia Tech and the University of Georgia. 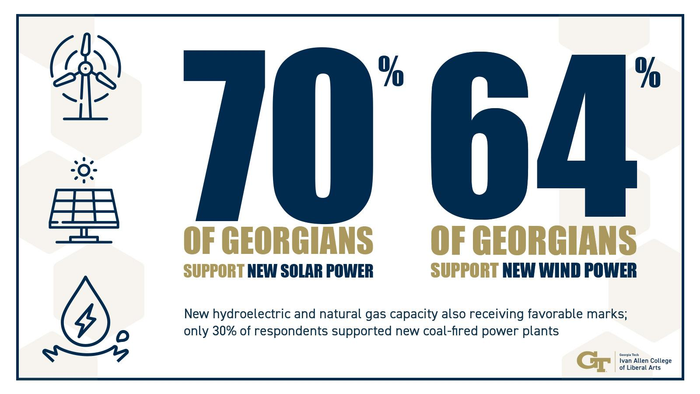 A majority of Georgia residents strongly support new solar and wind power capacity over new coal-fired plants and believe the state should set a carbon emissions reduction goal, according to a new survey conducted for researchers at Georgia Tech and the University of Georgia.

“This survey demonstrates that many Georgians across the political spectrum are in favor of green energy solutions that will benefit the state’s environment, create new jobs, and support our economy,” said Marilyn Brown, Regents Professor and Brook Byers Professor of Sustainable Systems in Georgia Tech’s School of Public Policy.

Cory Struthers, assistant professor in the School of Public and International Affairs at the University of Georgia, and Brown designed the survey with help from graduate students in Georgia Tech’s Climate and Energy Policy Lab (CEPL).

Brown and Struthers are affiliated with Drawdown Georgia, a project of the Ray C. Anderson Foundation, which provided funding to universities and stakeholders across Georgia to identify promising climate solutions for the state. The Foundation provided support for this survey, in addition to other activities to translate research into action, including the Drawdown Business Compact.

“This survey provides important new information about how people in Georgia feel about climate solutions,” said Blair Beasley, the Foundation’s director of climate strategies. “We are pleased to see that the results validate Georgians’ support of many high-impact solutions that Drawdown Georgia has identified for their potential to reduce emissions in our state this decade.”

The Busbee Endowment at the University of Georgia and Georgia Tech’s Brook Byers Institute for Sustainable Systems also provided support for the survey.

Support for a Range of Climate Solutions

All survey participants answered a set of common questions about their demographics, energy bills, knowledge of climate solutions, values, and more. The respondents were then divided into three groups, with participants in each answering additional questions that focused on one of three transformational climate solutions: rooftop solar, retrofitting, or electric vehicles.

Overall, 75% of Democrats, 55% of independents, and 49% of Republicans supported development of a climate resiliency plan for Georgia to prepare for the impacts of climate change.

Climate technologies that individuals can adopt at home were also well-viewed. A majority of respondents either already had residential energy-saving technologies or were interested in adopting them. The highest combined level of interest and adoption was for using LED lights at 93%, followed by efficient HVAC systems (80%), rooftop solar (59%), community solar (59%), and electric vehicles (55%).

“These high-impact solutions have the potential to both reduce emissions and increase energy efficiency in Georgia,” Struthers said. “A cleaner, more efficient Georgia means increased air and environmental quality, job creation, and gains in public health.”

The survey findings also shed light on the prevalence of “energy poverty” in Georgia. A household is energy-poor when it spends more than 6% of its income on energy. The survey found that while households with incomes greater than $150,000 spent about 2% of their income on energy bills each month, households with incomes less than $20,000 spent, on average, between 14% and 21% of their monthly earnings on energy.

The survey also found low levels of literacy in regard to climate solutions, energy technology, and policy among respondents. Fewer than 35% of respondents knew the correct answer to questions related to energy and climate, including what energy sources are fossil fuels and the relative cost of operating electric and gasoline-powered vehicles. Only 4% of those surveyed correctly answered that solar panels generate energy in full sunlight, in the shade, and on rainy days.

“We want to use this data to continue to answer questions about the diffusion of, and support for, clean and equitable energy technology transition in Georgia,” Brown said. “How can this data help us overcome ambivalence toward clean energy and design programs that make the energy transition work for all Georgians, especially the most vulnerable? How can it help us to raise knowledge and awareness about the promise of high-impact climate solutions?”

A PowerPoint of the full findings can be downloaded from the CEPL website.

The Georgia Institute of Technology, or Georgia Tech, is a top-10 public research university developing leaders who advance technology and improve the human condition. The Institute offers business, computing, design, engineering, liberal arts, and sciences degrees. Its nearly 44,000 students, representing 50 states and 149 countries, study at the main campus in Atlanta, at campuses in France and China, and through distance and online learning. As a leading technological university, Georgia Tech is an engine of economic development for Georgia, the Southeast, and the nation, conducting more than $1 billion in research annually for government, industry, and society.