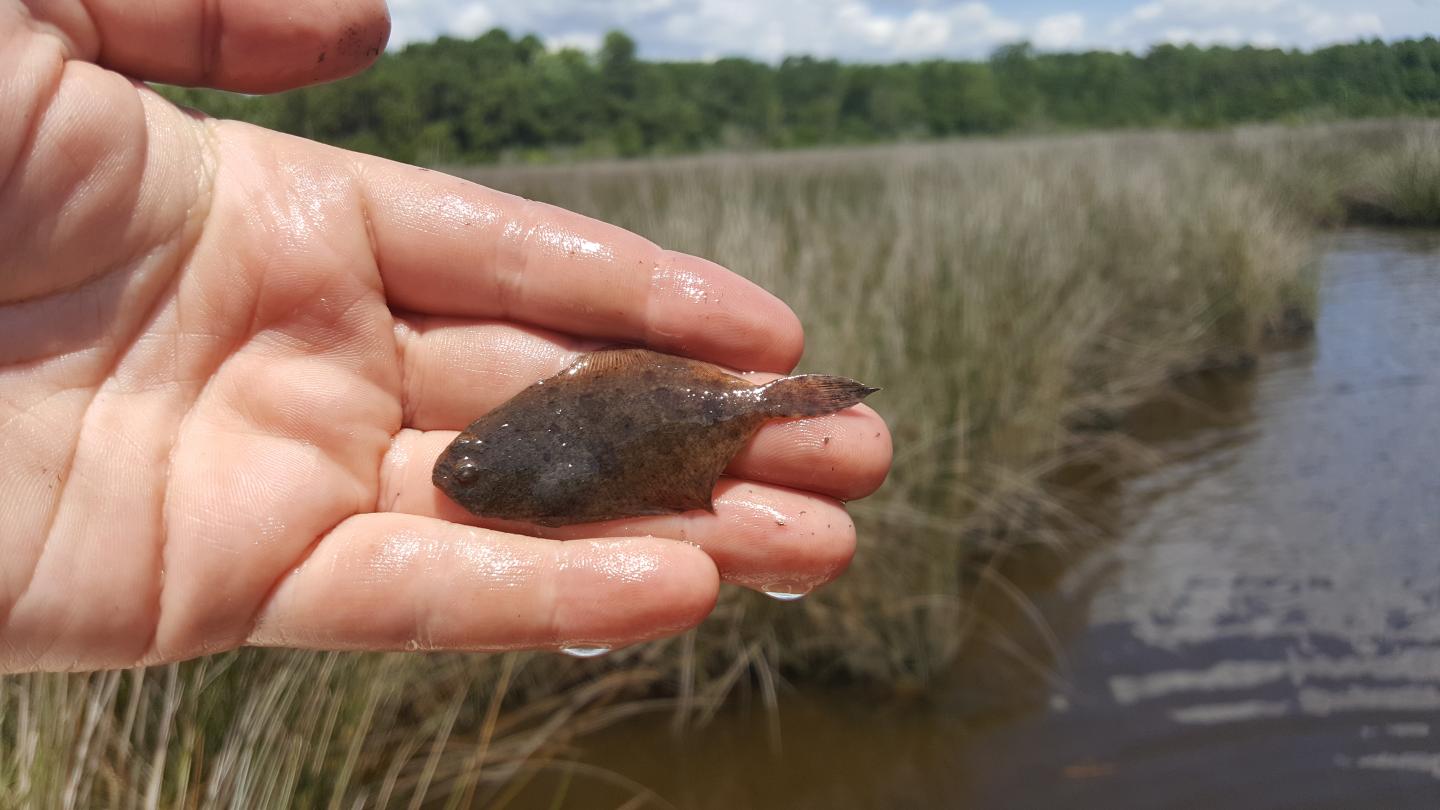 If southern flounder live in warmer water during a critical window of early development, a higher percentage become male – more than 90 percent in some cases – research from North Carolina State University found. Having a high proportion of adult males over the long term could threaten both wild populations and the valuable commercial fishing industry, which depends on larger female flounder.

Field research and lab experiments showed that a four-degree Celsius difference in average water temperature during juvenile development shifted the male-female ratio from about 50-50 to as much as 94-6, says Jamie Honeycutt, an NC State postdoctoral researcher and lead author of an article about the research in Scientific Reports. That difference is within the range of expected ocean temperature increases under climate change models.

Environmental factors such as water temperature influence sex determination in southern flounder, as well as in other fish and reptiles, Honeycutt explains. Flounder stick to shallow waters that serve as nurseries until after they become male or a female, hanging around estuaries until reaching maturity before returning to the ocean to spawn at about age 2.

“We think that southern flounder have a genetic sex-determining system similar to humans, who have two X chromosomes for a female and an X and a Y for a male. In flounder, if an individual is a genetic male, it is destined to be male,” Honeycutt says. “However, if a genetic female is exposed to temperature extremes, then it can develop as a functioning male.”

Environmental sex determination could allow flounder to do better under adverse conditions by producing more males, which are smaller and use fewer resources. But if the male bias persists in adult flounder, that could be bad news for wild populations and commercial and recreational fishing.

“Flounder fisheries are really totally dependent on females because males rarely make it to catch and market sizes,” Honeycutt says. “Whenever you’re eating a flounder in a restaurant, it is almost always a female flounder. So, the concern is that if populations are masculinized there will be fewer females to produce new flounder, further stressing this female-dependent fishery.”

From 2014 to 2017, researchers monitored spring and summer water temperatures in three regions: along Pamlico Sound (the northern region), the Neuse River (an intermediate zone) and Mill Creek (the southern region).

Because of the small size of juvenile flounder, scientists used a molecular biomarker developed from previous NC State research to determine sex. A follow-up experiment duplicated those conditions in tanks.

“What we wanted to do was mimic those temperature profiles in the laboratory when everything else was held constant to see if we could produce similar sex ratios,” Honeycutt says. “And that’s exactly what we found.”

Researchers were not able to track flounder through the life cycle in the wild to confirm that the biased sex ratios persist.

“One thing we can’t say is exactly how this translates into changes in the adult population, because flounder move around a lot following juvenile development,” says co-author John Godwin, an NC State biological sciences professor. “However, the southern flounder fishery has been listed in ‘concerned’ status for many years, so anything we can do to improve management tools and help it recover will be valuable.”

Southern flounder is North Carolina’s most valuable finfish, and it and related species are important coastal species in the Atlantic and Pacific, says co-author Russell Borski, an NC State biological sciences professor.

“We want to track the southern flounder population along the north-south gradient across the Southeast United States to see what’s happening to the entire population, in Georgia and South Carolina versus North Carolina. We want to see whether the species is able to adapt to rising water temperatures by shifting its habitat.”

The study appears in Scientific Reports. The work was supported by NC State’s College of Sciences and College of Agriculture and Life Sciences, the N.C. Division of Marine Fisheries, the National Oceanic and Atmospheric Administration, N.C. Sea Grant, and private local landowners.

Note: An abstract of the paper follows.

Abstract: Southern flounder (Paralichthys lethostigma) exhibit environmental sex determination (ESD), where environmental factors can influence phenotypic sex during early juvenile development but only in the presumed XX female genotype. Warm and cold temperatures masculinize fish with mid-range conditions producing at most 50% females. Due to sexually dimorphic growth, southern flounder fisheries are dependent upon larger females. Wild populations could be at risk of masculinization from ESD due to globally increasing water temperatures. We evaluated the effects of habitat and temperature on wild populations of juvenile southern flounder in North Carolina, USA. While northern habitats averaged temperatures near 23 degrees C and produced the greatest proportion of females, more southerly habitats exhibited warmer temperatures (>27 degrees C) and consistently produced male-biased sex ratios (up to 94% male). Rearing flounder in the laboratory under temperature regimes mimicking those of natural habitats recapitulated sex ration differences observed across the wild populations, providing strong evident that temperature is a key factor influencing sex ratios in nursery habitats. These studies provide evidence of habitat conditions interacting with ESD to affect a key demographic parameter in an economically important fishery. The temperature ranges that yield male-biased sex ratios are within the scope of predicted increases in ocean temperature under climate change.

Kiss and run: How cells sort and recycle their components