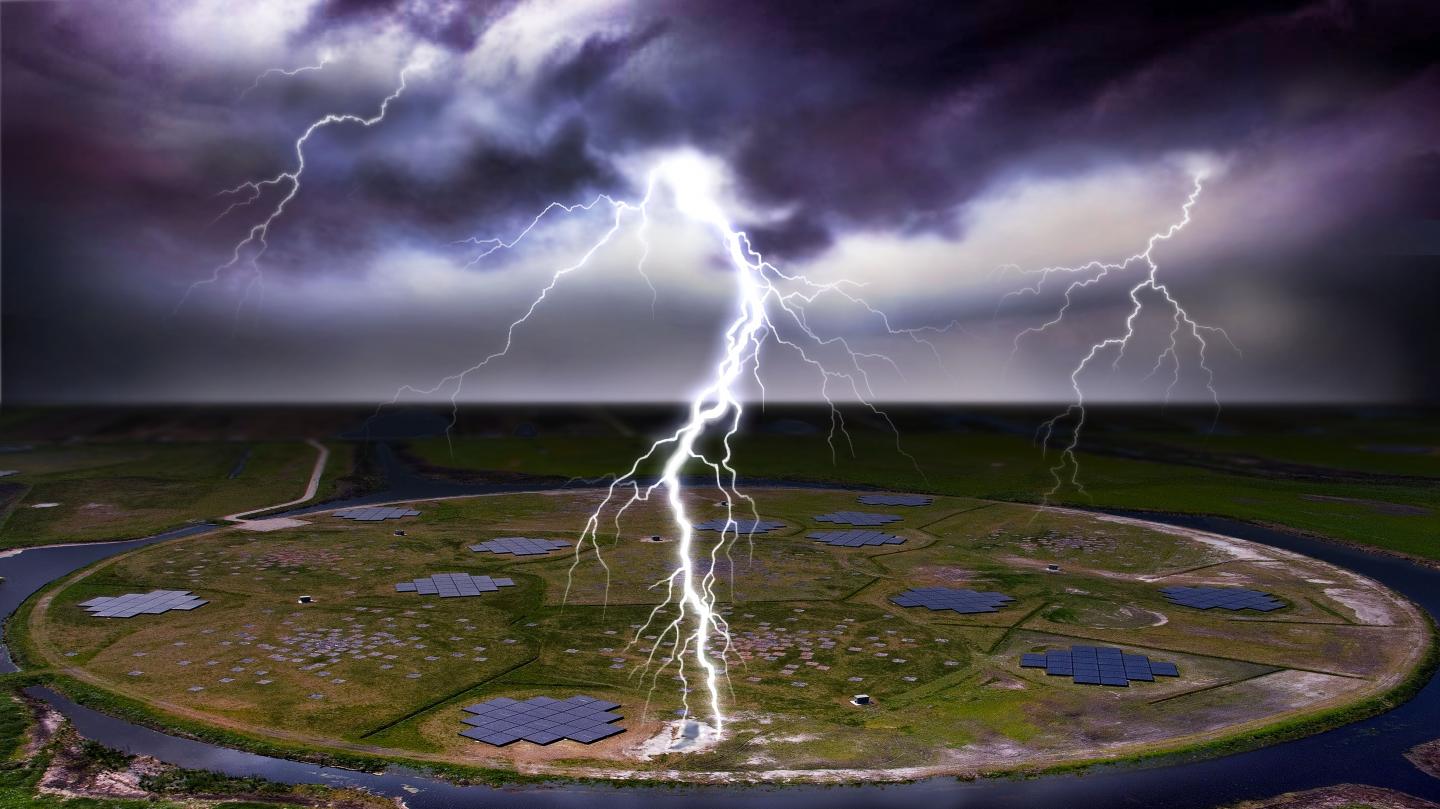 It is still unclear what exactly happens when lightning develops. Based on high-resolution data of the LOFAR radio telescope, an international team of researchers has now discovered needle-shaped structures that might shed light on the discharge processes. Essential foundations for measuring lightning with the world’s largest antenna array were laid at KIT. The so-far unknown “lightning needles” might help to explain why lightning does not always discharge at once, as was thought for a long time, but can strike several times within seconds. The scientists have now published their results in Nature (DOI: 10.1038/s41586-019-1086-6).

When ice crystals collide in a thundercloud, they are charged electrically. Winds may separate the crystals, such that parts of the cloud are charged positively, whereas other parts are charged negatively. If the resulting electric field becomes too large, a violent discharge takes place, which we perceive as lightning and thunder. Discharge starts with a small volume of air in which electrons separate from air molecules. This ionized air, also called plasma, is electrically conductive. The plasma propagates in the form of branched channels until it hits the Earth and charge stored in the clouds is discharged in the form of lightning. Information about the exact processes taking place in these channels and about the recently discovered “lightning needles” is provided by high-resolution data derived from lightning flashes. Scientists have collected these data with the Dutch radio telescope LOFAR (Low Frequency Array).

The recent observations made by the LOFAR research team reveal that positively and negatively charged plasma channels behave differently during lightning initiation. This seems to be due to the needle-shaped structures that have now become visible for the first time. They lead away from the positively charged channels in perpendicular direction, are about 100 m long, and have a diameter of less than 5 m. The scientists assume that the charge of a positive plasma channel is not discharged entirely during a lightning strike, but that part of the charge returns to the thundercloud via the needles. The stored charge could then initiate further discharges. This would explain why lightning does not discharge at once, as was thought for a long time, but can strike several times within seconds.

“The LOFAR data allow us to detect lightning propagation at a scale where, for the first time, we can distinguish the primary processes,” says Dr. Brian Hare of Groningen University, who is the first author of the publication in Nature. LOFAR consists of thousands of antennas distributed across Europe – an array primarily developed for astronomical observations, which meanwhile is also being used to measure cosmic rays. The signals triggered by cosmic particles in the atmosphere are stored in buffers at the individual antennas and then read out for detailed analyses. “The underlying technology, pioneered and advanced at KIT, is now also used for measuring and storing radio signals emitted by lightning,” says Dr. Tim Huege of KIT’s Institute for Nuclear Physics and member of the “LOFAR Cosmic Ray Key Science Project”.

When measuring lightning flashes, LOFAR reaches a spatial accuracy of up to 1 meter and typically records 1 signal per microsecond. The resulting high-resolution 3D films allow studies of lightning initiation at unprecedented levels of detail. KIT’s research has largely contributed to reaching such a high precision in lightning observations. The foundations for measuring cosmic particles and, hence, for a more detailed investigation of lightning was laid by experiments carried out with the digital antenna array “LOPES” (LOfar PrototypE Station) until 2013 as part of the KASCADE-Grande particle detector array on the premises of KIT.

Video 1: Slow motion of a lightning that forms within 0.2 s and spans about 5 km in all directions. The yellow points indicate current, the white points past radio signals.
https://drive.google.com/file/d/1cIYqDiQ811Swm0nkroYVtfB4wwsF_sBW/view

Video 2: Close-up of a plasma channel persisting for 0.1 s and spanning 400 m. One of the newly discovered needle-shaped structures is colored in red.
https://drive.google.com/file/d/1lZVco-jzkjyEKBJP4Ddpyc8_ow-uy1tC/view

Management and outcomes of aortic dissection in pregnancy with Marfan Syndrome

Turning an old enemy into a helpful friend

Making and controlling crystals of light