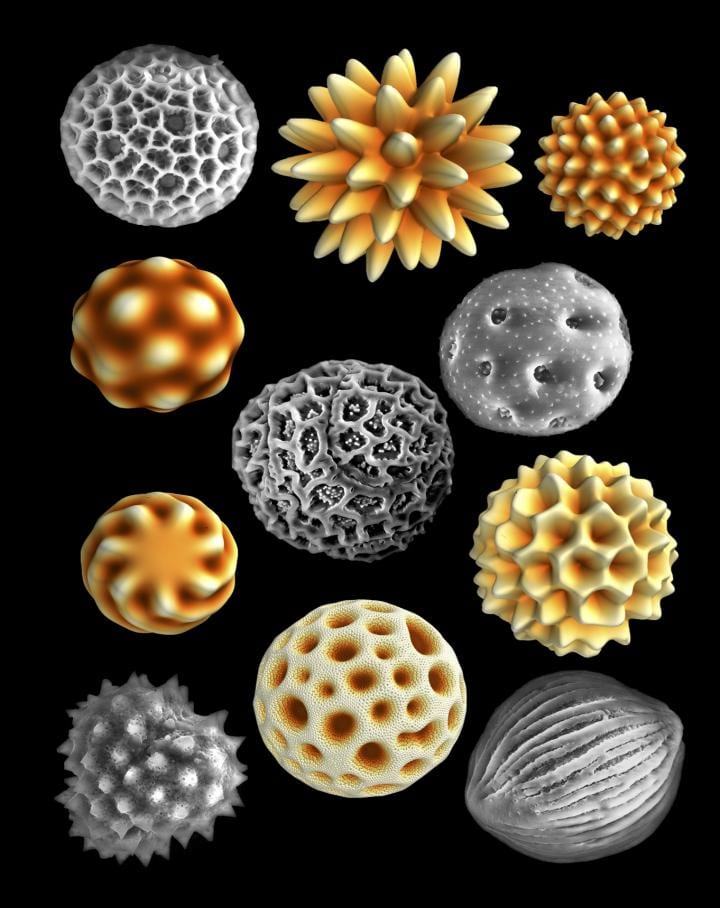 It’s no secret that pollen plays a vital role in plant reproduction worldwide, including the production of food. But for decades, scientists have been puzzled about the variety of patterns on the surface of these pollen grains–specifically, how they are formed and if they have a function.

“The pollen wall itself–the surface of a pollen grain–serves the important function of protecting the pollen grain genetic material from the environment as the pollen travels during the process of pollination. However, the function of the precise pattern on this surface is not well understood,” said Maxim Lavrentovich, assistant professor of theoretical biophysics in the Department of Physics and Astronomy at the University of Tennessee, Knoxville, and coauthor of the study.

Researchers observed that in approximately 10 percent of living plant species the formation of symmetrical, identical, and reproducible pollen grains occurs when the phase separation of pollen production reaches a point of equilibrium.

“A phase separation is the process by which an initially mixed system equilibrates into two or more distinct materials. The separation of oil from water in a bowl of soup is a good example of this,” said Lavrentovich. “In this case, what gets separated is a low-density mixture of polysaccharides from a high-density one.”

In contrast, the other 90 percent of living plant species either never reach the equilibrium point and produce asymmetrical pollen grains, or achieve smooth, un-patterned grains.

This predominance shows, according to Lavrentovich, that nature does not favor a point of equilibrium in most plant seeds during their evolution process.

For the study, researchers distilled biological features of the pollen pattern development and used that information to construct a physical model of these essential features.

The evolutionary analysis shows that natural selection does not favor symmetrical, uniform pollen patterns, but rather that plants more rapidly develop more disordered, asymmetrical patterns. These disordered patterns are captured in the biophysical model through a kinetic arrest of the pattern evolution.

“We used a simple biophysical model to explain the biological process of pattern creation,” said Lavrentovich. “In the future, we would like to refine our model by better characterizing both the physical and chemical parameters of the phase separation process.”

The findings provide a better understanding of the pattern-forming process of pollen grains. In a more practical setting, they could help in future efforts to produce artificial pollen.

“Many plant species undergo the pollination process successfully with symmetrically or asymmetrically patterned pollen grains. Still, understanding if these differences have some kind of impact is important for applications such as constructing new patterned materials using a pollen-like physical mechanism and for the categorization of plant species,” said Lavrentovich.

The paper, “Pollen Cell Wall Patterns Form from Modulated Phases,” was written in collaboration with researchers Asja Radja, Eric M. Horsley, and Alison Sweeney, all from the Department of Physics and Astronomy at the University of Pennsylvania.

Investigating coral and algal ‘matchmaking’ at the…