Once an infection is under control, the body normally uses a biochemical messenger known as TGFβ to downgrade its immune response. In severe COVID-19, however, this messenger is released at the very beginning of the infection, thus blocking the early control of the pathogen by the innate immune system. This was the conclusion of a study by Charité – Universitätsmedizin Berlin and the Leibniz Association’s German Rheumatism Research Center Berlin (DRFZ), which has now been published in Nature*. The early production of the immune-dampening TGFβ messenger appears to be a hallmark of COVID-19 and has not been observed in other types of pneumonia. Correction of the immune system’s faulty timing may therefore offer a new strategy for preventing severe disease. 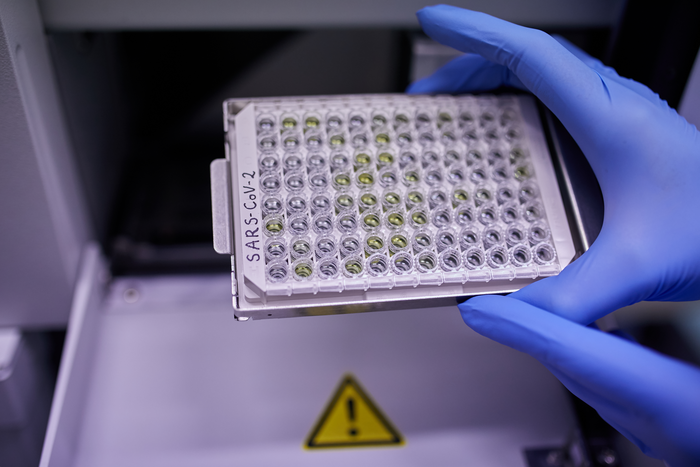 Once an infection is under control, the body normally uses a biochemical messenger known as TGFβ to downgrade its immune response. In severe COVID-19, however, this messenger is released at the very beginning of the infection, thus blocking the early control of the pathogen by the innate immune system. This was the conclusion of a study by Charité – Universitätsmedizin Berlin and the Leibniz Association’s German Rheumatism Research Center Berlin (DRFZ), which has now been published in Nature*. The early production of the immune-dampening TGFβ messenger appears to be a hallmark of COVID-19 and has not been observed in other types of pneumonia. Correction of the immune system’s faulty timing may therefore offer a new strategy for preventing severe disease.

Transforming Growth Factor β (TGFβ) is a biochemical messenger (cytokine) with multiple functions throughout the human body. In addition to playing an important role in embryonic development and tissue repair, it also has potent immune-modulatory effects. This  signaling molecule normally plays a role in downregulating the body’s immune response once a pathogen has been successfully controlled. For this reason, production is normally timed to coincide with the end of an infection. With COVID-19, the situation appears to be different. Working alongside colleagues from the DRFZ, a multidisciplinary team of researchers from Charité have revealed that patients with severe disease show an increase in the production of TGFβ as early as the first week of infection. “We observed no such increase in other types of pneumonia, which came as a big surprise,” says the study’s co-corresponding first author, Dr. Mario Witkowski, a researcher at Charité’s Institute of Microbiology, Infectious Diseases and Immunology. The team discovered that this untimely release of immune-dampening TGFβ has an effect on the body’s innate immune response, a branch of the body’s immune system which has previously received markedly less attention from the global scientific community.

The innate immune response is the first line of defense against pathogens entering the body. Though non-specific (i.e., the same for all pathogens), the innate immune response is ready to spring into action at any time. If this first line of defense fails to render the pathogen harmless, the second step is to activate the body’s adaptive immune response – including both antibody-producing B cells and T cells – which targets and eliminates specific pathogens. However, the adaptive immune system must first acquire the ability to recognize these pathogens, and so its activation takes some time.

The innate immune system is therefore critical to the body’s ability to mount an immediate response against invading pathogens. If the pathogen in question is a virus, this response primarily involves the activation of ‘natural killer’ (‘NK’) cells, which are able to identify specific infection-related cell surface changes and thus to recognize virus-infected cells. NK cells can then eliminate these virus-infected cells using cellular toxins. For the first time, the Berlin-based team of researchers was able to show that NK cells also play a role in the early control of SARS-CoV-2. However, their ability to eliminate SARS-CoV-2-infected cells was impaired by the early release of TGFβ.

The researchers began by isolating NK cells from the blood of men and women who had developed COVID-19 of varying degrees of severity. This was followed by functional analysis in the laboratory. A subsequent comparison with cells isolated from both healthy donors and patients with other severe respiratory diseases showed that NK cells are able to recognize and kill SARS-CoV-2-infected lung tissue cells. Furthermore, the decrease in throat viral load was found to be particularly rapid in individuals whose blood had shown large numbers of these immune cells at the beginning of their SARS-CoV-2 infection. “In short, NK cells help the body fight SARS-CoV-2,” explains Dr. Witkowski. “According to our laboratory tests, however, cells isolated from patients with severe disease were far less effective against the virus than cells taken from individuals with mild symptoms.”

The researchers identified the early release of TGFβ as the underlying cause. This conclusion was reached after analyzing more than 80,000 single NK cells from a total of 68 samples taken from COVID-19 patients with varying degrees of disease severity. By establishing which genes had been activated in each of the cells, the researchers created an ‘atlas of gene expression’ which provided extremely detailed data on immune cell responses. Their analysis also pointed to a profound effect being exerted by the immune-dampening cytokine TGFβ. “Our data show that, while NK cells are activated early in patients with COVID-19, they are then promptly blocked by TGFβ,” says Dr. Mir-Farzin Mashreghi, head of the DRFZ research group which conducted the gene expression analyses. “NK cells find it harder to bind to virus-infected cells and are therefore unable to eliminate them.” This effect is primarily observed in COVID-19 patients with severe disease. Here, high levels of TGFβ are seen in the initial days of infection. In contrast, individuals with mild symptoms only produce this chemical messenger after more than three weeks. In patients with other severe pneumonias, NK cells were not found to be affected by TGFβ.

“It is therefore clear that, in addition to other factors, the clinical course of COVID-19 is determined by the timing of the TGFβ release,” explains co-corresponding author and study lead Prof. Dr. Andreas Diefenbach, Director of Charité’s Institute of Microbiology, Infectious Diseases and Immunology. Prof. Diefenbach, who also holds an Einstein Professorship for Microbiology and leads the DRFZ’s Mucosal Immunology Research Group, describes his working hypothesis as follows: “It is likely that in most people with COVID-19, the innate immune system is able to push back against the virus shortly after infection. In some patients, however, the immune response to the pathogen is so profound that the body acts to correct this and produces TGFβ, the biochemical messenger which, among other things, impairs NK cell function. This of course happens at a point in time when SARS-CoV-2 is yet to be eliminated, meaning the blocking signal is sent too early. The end result of this faulty immune response is an inability to fight the virus in an effective manner, which in turn causes the damage typically associated with severe disease. We did not observe this combination of robust activation and simultaneous blocking of NK cells in patients with other infections like influenza; it appears to be a hallmark of COVID-19.”

Based on their findings, the researchers anticipate that the timely inhibition of TGFβ could prevent progression to severe COVID-19. Candidates capable of blocking the chemical messenger are currently undergoing testing as part of clinical trials. They include a range of substances originally developed for use in the treatment of cancer and rheumatoid arthritis, disorders in which TGFβ also plays a role. “The use of anti-TGFβ treatments to correct the timing of the body’s immune response would make for an interesting strategy. Before anything else, however, it will be necessary to test the experimental TGFβ-inhibitors in animal models,” emphasizes Prof. Diefenbach. “We believe there is a further potential treatment target. It may be possible to target NK cells directly and, through their activation, restore their ability to eliminate SARS-CoV-2-infected cells. We will therefore study the precise mechanisms by which immune cells recognize and eliminate their target cells.”

About this study
This research was primarily funded by the German Research Foundation (DFG), the Berlin state government, the European Commission, and the Berlin Institute of Health at Charité (BIH). The study received additional funding via COVIM, Organo-Strat and DEFEAT PANDEMIcs, collaborative projects funded by the Federal Ministry of Education and Research (BMBF) and conducted under the auspices of the NUM, an academic research network initiated and coordinated by Charité which brings together the combined strength of Germany’s 36 university hospitals.

About Charité – Universitätsmedizin Berlin
Charité – Universitätsmedizin Berlin is one of the largest university hospitals in Europe, offering 3,001 beds and boasting approximately 100 departments and institutes spread across 4 separate campuses. With a total of 19,400 members of staff employed across its group of companies (16,391 of which at Charité), the organization is one of the largest employers in Berlin. At Charité, the areas of research, teaching and medical care are closely interlinked. 4,707 of its employees work in the field of nursing, with a further 4,693 in research and medical care. Last year, Charité treated 132,383 in- and day case patients, in addition to 655,138 outpatients. In 2020, Charité recorded a turnover of approximately € 2.2 billion (including external funding and investment grants) and set a new record by securing € 196 million in external funding. Charité’s Medical Faculty is one of the largest in Germany, educating and training more than 8,600 medical, dentistry and health sciences students. Charité also offers 577 training positions across 10 different health care professions. Within the field of academic medicine, Charité’s priorities are highlighted by its main areas of research focus: infection; inflammation and immunity including COVID-19 research; cardiovascular research and metabolism; neuroscience; oncology; regenerative therapies; and rare diseases and genetics. Examples of the work conducted by Charité researchers include involvement in 14 European Research Council grants and 9 European collaborative projects (coordinated by Charité).