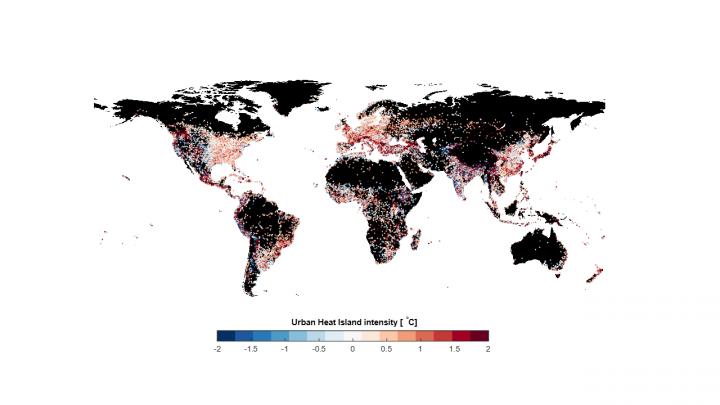 Urban heat islands are a phenomenon where the temperature in a city is noticeably higher than in the surrounding rural area. When combined with the sort of heatwave that hit many parts of Europe at the beginning of July, urban heat can pose a real threat to the elderly, sick or other vulnerable people. Scientists at ETH Zurich have researched urban heat islands across the globe and have found that the effectiveness of heat-reduction strategies in cities varies depending on the regional climate. “We already know that plants create a more pleasant environment in a city, but we wanted to quantify how many green spaces are actually needed to produce a significant cooling effect,” says Gabriele Manoli, former postdoc with the Chair of Hydrology and Water Resources Management at ETH Zurich and lead author of the recently published article in the journal Nature.

More green spaces: not always the most efficient solution

Manoli and his colleagues from ETH Zurich, Princeton University and Duke University studied data from some 30,000 cities worldwide and their surrounding environment, taking into consideration the average summer temperature, the population size and the annual rainfall. The urban heat island phenomenon is more pronounced the bigger the city and the more rainfall in that region. As a general rule, more rain encourages plant growth in the surrounding area, making this cooler than the city. This effect is the strongest when annual rainfall averages around 1500 millimetres as in Tokyo, but does not increase further with more rain.

Two climate extremes illustrate well the role of vegetation on the urban heat island phenomenon: very dry regions on the one hand, and tropical areas on the other. Through carefully targeted planting, a city like Phoenix in the USA could achieve cooler temperatures than the surrounding countryside, where conditions are almost desert-like. By comparison, a city surrounded by tropical forests, such as Singapore, would need far more green spaces to reduce temperatures, but this would also create more humidity. In cities located in tropical zones, other cooling methods are therefore expected to be more effective, such as increased wind circulation, more use of shade and new heat-dispersing materials. “There is no single solution,” Manoli says. “It all depends on the surrounding environment and regional climate characteristics.”

Manoli explains that the main benefit of the study is a preliminary classification of cities, in the form of a clear visualisation guiding planners on possible approaches to mitigate the urban heat island effect. “Even so, searching for solutions to reduce temperatures in specific cities will require additional analysis and in-depth understanding of the microclimate,” he stresses. “Such information, however, is based on data and models available to city planners and decision-makers only in a handful of cities, such as Zurich, Singapore or London.”

Manoli is currently analysing data from other periods of the year and is studying which types of plant are most suitable for reducing temperatures. The support provided by the Branco Weiss Fellowship allowed the environmental engineer to work with scientists from the areas of physics, urban studies and social sciences with a specific focus on interdisciplinary research topics.

Think big — at least when it comes to global conservation

Scienmag Feb 8, 2019
Canada and Russia have the most to lose or gain, say researchersCredit: UBC Okanagan According to a group of…