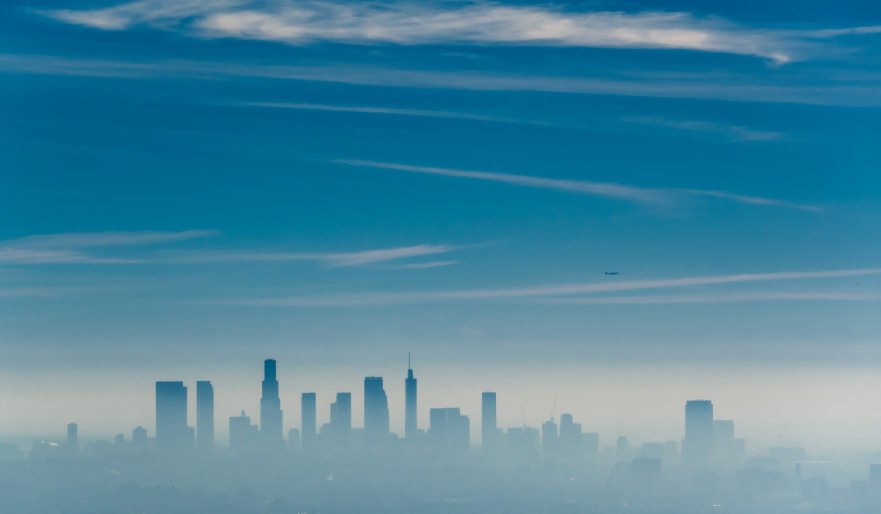 In discussions of anthropogenic climate change, carbon dioxide generally gets the spotlight, but it is not the only greenhouse gas spewed into the atmosphere by human activity, nor is it the most potent.

Methane is another greenhouse gas that is increasing in Earth’s atmosphere because of humans. Methane is produced by human activity in much smaller amounts than carbon dioxide, but it is roughly 25 times more powerful as a greenhouse gas. Though it is often associated with cow flatulence, bovines are not the only human-associated source of methane.

New research by Caltech scientists shows that, at least in the Los Angeles Basin, leaks of natural gas used for heating homes and businesses are major contributors to methane in the atmosphere.

The research was conducted by Liyin He (MS ’18), a graduate student in environmental science and engineering, while working in the lab of Yuk L. Yung, Caltech professor of planetary science and research scientist at the Jet Propulsion Laboratory, which Caltech manages for NASA. She found that methane concentrations in the air above L.A. fluctuate in tandem with the seasons. In winter, when natural gas use is at its highest, methane concentrations are also highest. In the summer, when natural gas use drops, so does the amount of methane in the air.

“Naturally, methane emissions should be pretty flat across the seasons, but maybe a little higher in the summer period because of a lot of things decompose from higher temperatures,” He says. “But it seems that in the city, natural gas consumption is so high in the winter that a lot of it leaks into the atmosphere.”

He conducted her research by using a device called a remote-sensing spectrometer atop Mt. Wilson, a mountain whose peak towers a mile above Los Angeles. From its lofty perch, the spectrometer had a view of a wide swath of the urban area below. Methane is invisible to human eyes, but it is easily seen by the spectrometer because it strongly absorbs infrared light, the wavelength of light to which the spectrometer is sensitive.

Using this setup, the spectrometer was pointed at 33 surface sites around the region and collected methane measurements six to eight times a day for six years. When those measurements were aggregated, a clear pattern emerged: methane levels in the atmosphere peaked each December and January and dipped to a low each June and July.

Though He’s research does not identify specific sources of methane, she says that it is likely that the entire natural gas distribution system, from storage fields to pipelines to stoves and furnaces, is responsible for the leaks.

Because methane is such a potent greenhouse gas, and because it is relatively short-lived in the atmosphere, identifying and reducing those natural gas leaks is one way humans might help reduce the effects of climate change, He says.

Funding for the research was provided by the National Institute of Standards and Technology, The California Air Resources Board, the National Aeronautics and Space Administration, and the Resnick Sustainability Institute fellowship program.

Scienmag Jun 27, 2019
A toolbox for building robots aware of their surroundingsCredit: A. Heddergott / TUM Many work processes would be…