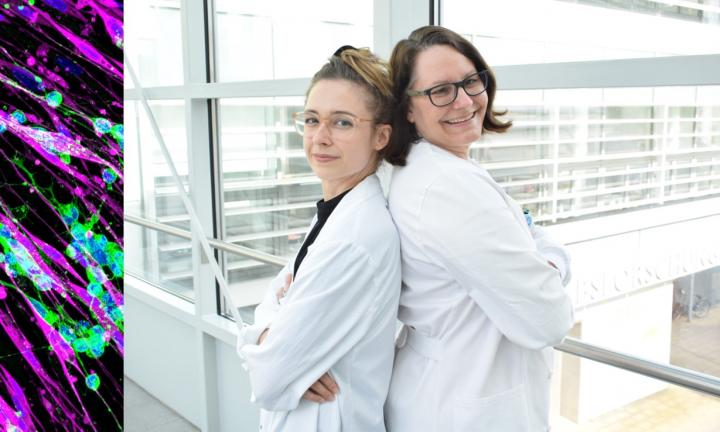 A factor that turns malignant tumors into benign ones? – That is exactly what scientists at St. Anna Children’s Cancer Research Institute have discovered. Together with colleagues from the Medical University of Vienna and the University of Vienna (Faculty of Chemistry), they studied tumors of the peripheral nervous system in children, namely neuroblastomas. The scientists discovered that the uncontrolled growth of benign neuroblastomas is stopped by a signal molecule produced by Schwann cells present within these tumors. This natural “brake” also works on malignant neuroblastoma cultures. The study, published in the journal Nature Communications, describes for the first time the function of this signal molecule – not only in tumors, but also in injured nerve fibers.

What sounds contradictory at first glance, namely firing a tumor with a growth factor, makes sense in neuroblastoma. Neuroblastoma is a tumor of the peripheral nervous system and the most common solid cancer in early childhood. In contrast to malignant neuroblastomas, benign neuroblastomas contain, next to tumor cells, many “Schwann cells”. These cells normally protect and repair nerve cells. The results of the now published study indicate that Schwann cells in neuroblastoma stimulate tumor cells to mature, thereby halting their unchecked growth.

A cell that stops tumor growth…

To accomplish this, Schwann cells produce, among other factors, a signaling molecule called epidermal growth factor like 8 (EGFL8). The research team demonstrates that EGFL8 stimulates the differentiation, or maturation, of neuroblastoma cells. “Until recently, we only knew that this protein existed, but its function was not known. We now for the first time know where EGFL8 is produced and how it acts,” explains study author Sabine Taschner-Mandl, PhD, head of the Tumor Biology Group at St. Anna Children’s Cancer Research Institute. Furthermore, the study results show that high levels of EGFL8 was associated with better survival rates in neuroblastoma patients.

“In cell cultures, we have demonstrated that Schwann cells as well as their secreted signaling molecules exert anti-tumor effects, even in aggressive neuroblastoma cells. Thus, we are able to exploit a process that occurs naturally in benign neuroblastomas to stop the malignant ones,” Sabine Taschner-Mandl and her colleague Tamara Weiss, PhD, from the Medical University of Vienna, explain. In addition to EGFL8, other, yet uncharacterized Schwann cell molecules could also provide targets for cancer therapies in the future.

However, the effects of Schwann cells are presumably much more extensive: the research team is currently investigating how Schwann cells manipulate immune cells in their environment.

…and promotes the healing of injured nerve fibers

The present study provides another significant finding: Schwann cells in benign neuroblastomas have a similar cellular status to those Schwann cells that support the healing of injured peripheral nerves. Direct comparison revealed that Schwann cells in the tumor express certain repair-associated genes and show specific repair functions. “It is amazing that we have discovered a signaling molecule that plays a role in both tumor development of benign neuroblastomas and regeneration of injured nerves. Since EGFL8 stimulates the formation of nerve cell extensions, it could be of great importance for the treatment of injured nerve fibers”, says Tamara Weiss.

It is conceivable that EGFL8 and other factors produced by Schwann cells could be applied in the treatment of nerve damage as well as aggressive neuroblastoma. “Using phosphoproteomics, we were able to decipher which signaling pathways are activated by EGFL8 in neuroblastoma cells. There are major differences compared to cells that have not been stimulated with EGFL8,” Sabine Taschner-Mandl says. In addition to EGFL8, these downstream signaling pathways also represent potential targets for future treatments. “There is still a long way to go before these findings ultimately reach the patient. But we have now laid the foundation for taking the next steps.”

For her research, Dr. Taschner-Mandl has received numerous grants, among others from the Austrian Research Promotion Agency, the Vienna Science, Research and Technology Fund, and the European Commission’s ERA-NET initiative.

Tamara Weiss studied Molecular Biology at the University of Vienna and performed research for her thesis as a visiting scientist in the Anne McLaren Laboratory for Regenerative Medicine at the MRC Cambridge Stem Cell Institute at the University of Cambridge. She dedicated her PhD project at St. Anna Children’s Cancer Research Institute to the comprehensive characterization of human Schwann cells and has since specialized in studying the role of Schwann cells in regeneration and pathologies of peripheral nerves, as well as in different tumors.

St. Anna CCRI is an internationally renowned multidisciplinary research institution with the aim to develop and optimize diagnostic, prognostic, and therapeutic strategies for the treatment of children and adolescents with cancer. To achieve this goal, it combines basic research with translational and clinical research and focus on the specific characteristics of childhood tumor diseases in order to provide young patients with the best possible and most innovative therapies. Dedicated research groups in the fields of tumor genomics and epigenomics, immunology, molecular biology, cell biology, bioinformatics and clinical research are working together to harmonize scientific findings with the clinical needs of physicians to ultimately improve the wellbeing of our patients.

MedUni Vienna is one of the most traditional medical education and research facilities in Europe. With almost 8,000 students, it is currently the largest medical training center in the German-speaking countries. With its 30 university hospitals and two clinical institutes, 12 medical theory centers and numerous highly specialized laboratories, it is also one of Europe’s leading research establishments in the biomedical sector.

About University of Vienna