Dr Apala Majumdar, EPSRC research fellow and reader in mathematical sciences, has won the academic category of the 2019 FDM Everywoman in Technology Awards 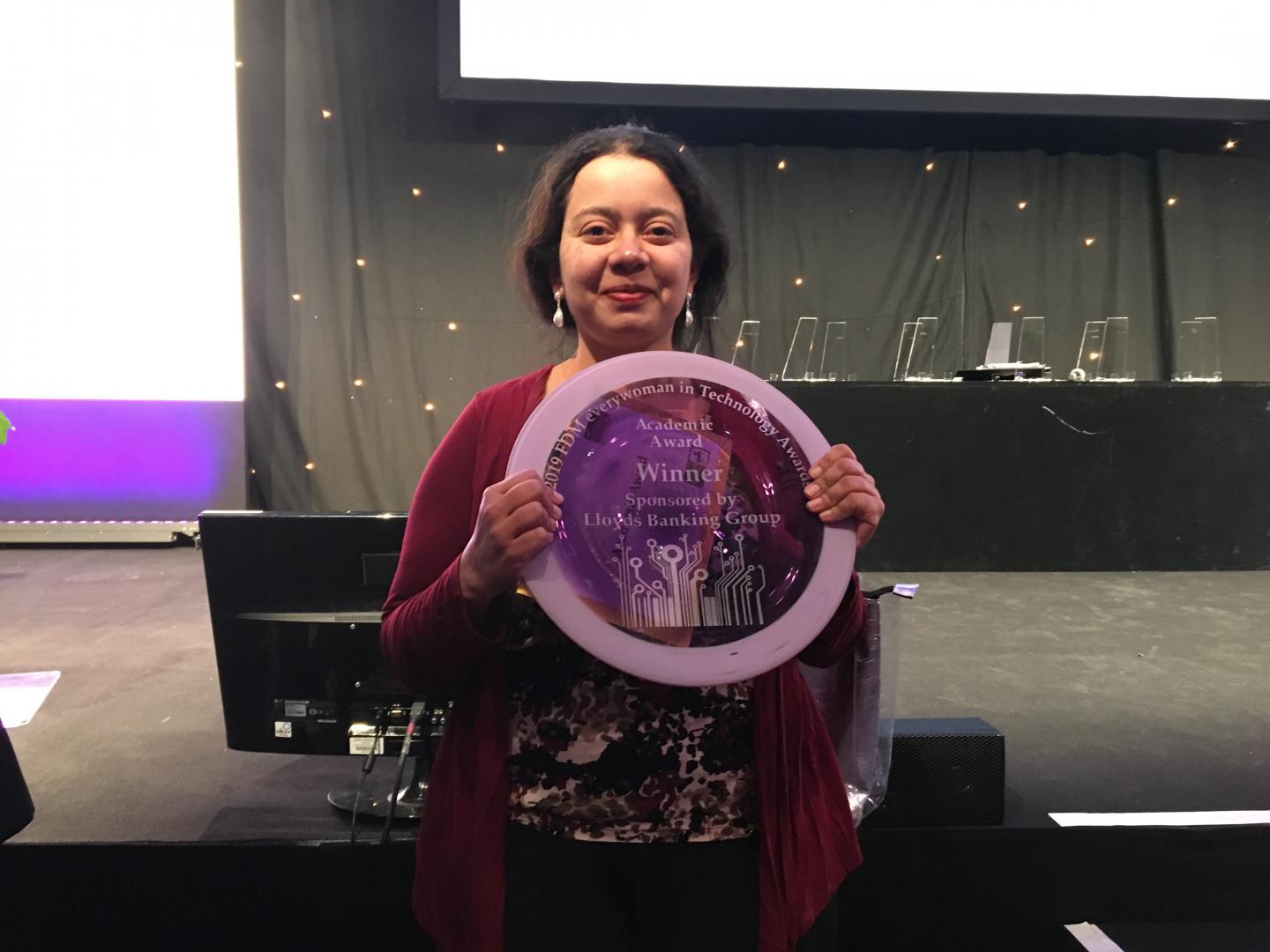 Dr Apala Majumdar, EPSRC Research Fellow and Reader in Mathematical Sciences at the University of Bath, has been named winner of the Academic category of the 2019 FDM Everywoman in Technology Awards.

The annual national awards programme uncovers and celebrates the most inspirational women working within STEM industries and recognises their role in inspiring and supporting the next generation.

Dr Apala Majumdar was one of three finalists for the Academic category of the annual awards programme, selected from a field of hundreds of applicants, chosen by a panel of senior technology leaders against criteria including career achievement, future potential and their commitment to supporting others in the industry.

Dr Majumdar moved to the University of Bath in 2012 and is currently Director of the University’s Centre for Non Linear Mechanics. Her research into the mathematics of material science, specifically into liquid crystals, aims to make LCD screens found in TVs and phones cheaper and more efficient.

She won the British Liquid Crystal Society Young Scientist Award in 2012 and the London Mathematical Society Anne Bennett prize in 2015. She is a member of the International Centre for Mathematical Sciences programme committee and has organised numerous international workshops.

She has held visiting professorships at Beijing Normal University, IIT Bombay, Shanghai Jia Tong, visiting fellowships at Oxford, Cambridge and the Chinese Academy and is principal investigator for projects involving overseas partners in India and China.

Her industrial research collaborations have included Merck and Hewlett Packard.

She was nominated by former senior colleague at the Mathematical Institute of the University of Oxford, Professor Alain Goriely, who said: “I cannot think of a more deserving candidate for an academic award for young women who are inspiring other female researchers around the world.

“Her publication record is stellar, her research inspiring, and she has single-handedly built an international network spanning four continents, making her one of the world leaders in her field and most internationally recognised of her generation.

“This award is a wonderful recognition of her many talents and achievements.”

Apala Majumdar said: “I would like to thank Professor Alain Goriely for nominating me. The wider support in my department at Bath, from the Head of Department and various colleagues, has been vital for raising my profile and building international links.

“It is very satisfying to see senior male academics championing the academic credentials of female researchers as they climb up the ladder.”

The winners were revealed at an awards ceremony on Wednesday 6 March in London, attended by over 500 industry leaders, government and the media. The awards champion and raise the profile of the individual women that are achieving success in their field, and the companies that are supporting them to do so.

Chris Budd OBE, Professor of Applied Mathematics and Deputy Director of the Institute for Mathematical Innovation at the University of Bath, said: “I am delighted that Apala has won this amazing award.

“She is without question one of the most talented young applied mathematicians working in the UK.

Previous winners from the University include Professor Semali Perera in 2017 and Professor Carole Mundell who was named Woman of the Year at the awards in 2016.

Obstructive sleep apnea may be one reason depression treatment…