Researchers at the Beckman Institute for Advanced Science and Technology will use a unique combination of imaging techniques to study Alzheimer’s disease on a scale that’s never been done before. 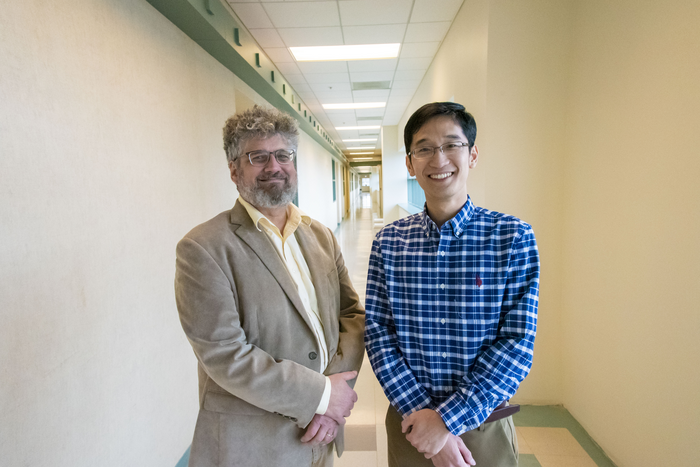 Researchers at the Beckman Institute for Advanced Science and Technology will use a unique combination of imaging techniques to study Alzheimer’s disease on a scale that’s never been done before.

Jonathan Sweedler, a professor of chemistry, and Fan Lam, a professor of bioengineering, will collaborate on the five-year project to combine magnetic resonance imaging and mass spectrometry imaging to capture a wide range of images in an animal model of Alzheimer’s disease. Their research is supported by a $3 million grant from the National Institute on Aging of the National Institutes of Health.

One overarching goal is to understand what happens at the molecular level in a mouse model of Alzheimer’s disease as a function of age and disease stage.

“Even though there’s a genetic disposition to Alzheimer’s, many people don’t end up with it,” Sweedler said. “And many people who have no genetic predisposition do end up with Alzheimer’s. There is increasing evidence that signatures at the molecular level may suggest that someone will be developing Alzheimer’s, decades before anything is functionally observable.”

While Alzheimer’s disease has been studied extensively, the intricacies of its causes and hereditary influence remain unknown. For this reason, the researchers are looking for factors that may have been missed. They want to know what differs chemically between a normal aging brain and an aging brain headed toward Alzheimer’s disease.

“There is some evidence that some populations of neurons are particularly vulnerable, and we want to know why,” Sweedler said. “To know that a specific neuron population is dying is one thing, but if we can understand chemically what’s changing, then others can design an intervention to prevent that.”

To obtain expanded chemical information on the mouse model of a brain affected by Alzheimer’s disease, the duo will use a unique combination of MRI and MSI imaging techniques.

“With most imaging approaches, you have to know what you’re looking at,” Sweedler said. “You pick a molecule and say, ‘Where is it, how much is there and what’s its precise chemical form?’ Our approach is different because the combination of MRI and MSI doesn’t have that requirement. We’re casting a broad net and saying, ‘What’s there?’ and we’re doing it at a spatial scale that’s never been done before, from single cell images to whole brains.”

Because the tissue sampled in MSI is extracted, it is capable of mapping hundreds or even thousands of molecules. This detailed chemical information allows researchers to reduce assumptions made toward the disease, allowing them to proceed with a more unbiased approach.

MRI is completely non-invasive and provides a whole-brain reference to reconstruct and reveal unique spatial organizations of molecules at different stages of Alzheimer’s disease.

Combining the two techniques plays to the strengths of both imaging modalities.

“If we can build connections between the information provided by MSI at the biochemical level to the macroscopic changes observable in MRI, we can potentially provide a basis to molecular-level interpretation of MRI,” Lam said. “You image a person, and then by seeing something you can maybe infer what’s going on underneath.”

The researchers, who initially connected through graduate student Yuxuan Richard Xie, were encouraged in their collaboration by the Beckman Institute.

“We can always talk about big ideas, but we really need outstanding students to serve as a bridge between different groups to bring things to fruition,” Lam said.

Lam and Sweedler are also excited to collaborate with Orly Lazarov, a professor of anatomy and cell biology at the University of Illinois Chicago College of Medicine who brings deep expertise on the molecular and cellular processes underlying cognition and cognitive dysfunction in Alzheimer’s disease.

“We look forward to continuously working together and with other collaborators at Beckman to push this direction forward and pursue other long-term research objectives beyond the time limit of this grant,” Lam said. “The grant will end, but our collaboration will continue.”