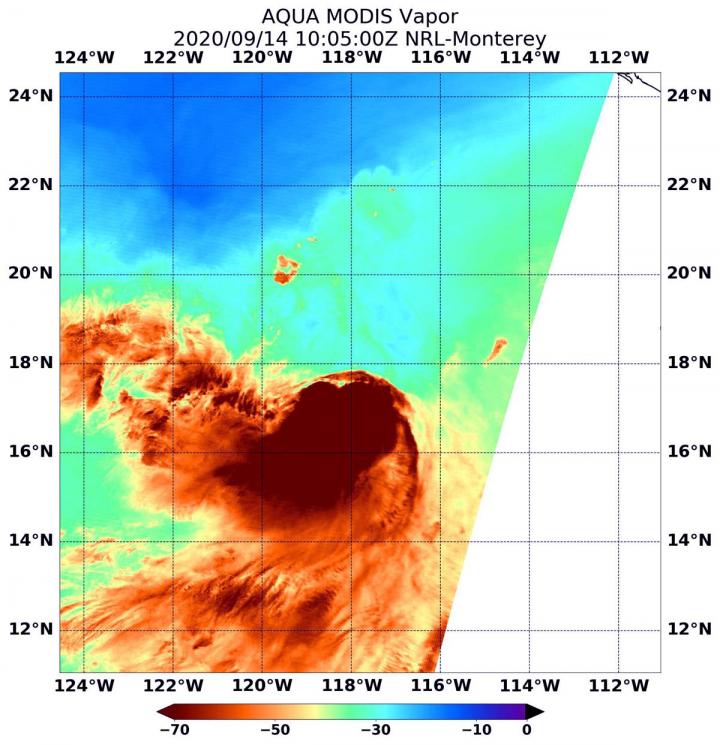 When NASA’s Aqua satellite passed over the Eastern Pacific Ocean, it gathered water vapor data on Tropical Storm Karina. The data showed that the storm was being affected by wind shear from the northeast, pushing the bulk of clouds to the southwest.

Karina formed late on Saturday, Sept. 12 as Tropical Depression 16E (TD16E). TD16E developed about 470 miles (755 km) south-southwest of the southern tip of Baja California, Mexico. Six hours later at 5 a.m. EDT on Sept. 13, the depression organized and strengthened into a tropical storm and was renamed Karina.

Water vapor analysis of tropical cyclones tells forecasters how much potential a storm has to develop. Water vapor releases latent heat as it condenses into liquid. That liquid becomes clouds and thunderstorms that make up a tropical cyclone. Temperature is important when trying to understand how strong storms can be. The higher the cloud tops, the colder and stronger the storms.

On Sept. 14 at 6:05 a.m. EDT (1005 UTC), NASA’s Aqua satellite passed over Tropical Storm Karina in the Eastern Pacific Ocean. The Moderate Resolution Imaging Spectroradiometer or MODIS instrument gathered water vapor content and temperature information and found highest concentrations of water vapor and coldest cloud top temperatures were southwest of the center. That is because of strong northeasterly wind shear pushing the strong storms away from the center of circulation.

“Karina continues to be a sheared cyclone with the deep convection displaced to the southwest of the exposed low-level center,” noted Jack Beven, a senior hurricane specialist at NOAA’s National Hurricane Center in Miami. “Recent scatterometer [instrument that analyzes winds] data showed winds up to 40 knots in the southern semicircle, and thus the initial intensity remains 40 knots.”

The shape of a tropical cyclone provides forecasters with an idea of its organization and strength. When outside winds batter a storm, it can change the storm’s shape. Winds can push most of the associated clouds and rain to one side of a storm.

In general, wind shear is a measure of how the speed and direction of winds change with altitude. Tropical cyclones are like rotating cylinders of winds. Each level needs to be stacked on top each other vertically in order for the storm to maintain strength or intensify. Wind shear occurs when winds at different levels of the atmosphere push against the rotating cylinder of winds, weakening the rotation by pushing it apart at different levels.

At 5 a.m. EDT (2 a.m. PDT/0900 UTC), the center of Tropical Storm Karina was located near latitude 17.9 degrees north and longitude 118.2 degrees west. Karina is centered 640 miles (1,025 km) west-southwest of the southern tip of Baja California, Mexico.  Karina is moving toward the west near 13 mph (20 kph). Maximum sustained winds are near 45 mph (75 kph) with higher gusts. Tropical-storm-force winds extend outward up to 150 miles (240 km) from the center. The estimated minimum central pressure is 1001 millibars.

A turn toward the northwest is expected by tonight, Sept. 14, with this motion continuing for the next few days. Some slight strengthening is forecast in the next 24 hours, with gradual weakening expected to begin on Tuesday.

NASA’s Aqua satellite is one in a fleet of NASA satellites that provide data for hurricane research.