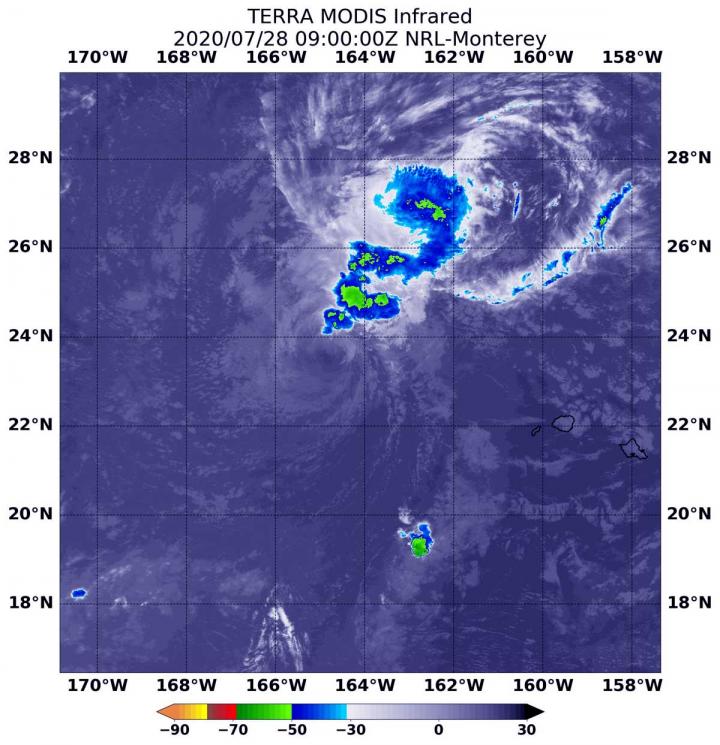 Former Hurricane Douglas has encountered strong wind shear after passing the Hawaiian Islands and has now weakened to a tropical storm. NASA’s Terra satellite provided infrared data to find that the strongest storms were displaced from the center as the storm weakens.

Warnings in Effect for Douglas on July 28

NASA’s Terra satellite uses infrared light to analyze the strength of storms by providing temperature information about the system’s clouds. The strongest thunderstorms that reach high into the atmosphere have the coldest cloud top temperatures.

The wind shear and displacement of storms has led to a rapid weakening trend over the past 24 hours.

The shape of a tropical cyclone provides forecasters with an idea of its organization and strength. When outside winds batter a storm, it can change the storm’s shape and push much of the associated clouds and rain to one side of it. That is what wind shear does.

In general, wind shear is a measure of how the speed and direction of winds change with altitude. Tropical cyclones are like rotating cylinders of winds. Each level needs to be stacked on top each other vertically in order for the storm to maintain strength or intensify. Wind shear occurs when winds at different levels of the atmosphere push against the rotating cylinder of winds, weakening the rotation by pushing it apart at different levels.

Douglas was moving toward the west-northwest near 18 mph (30 kph), and this general motion is expected to continue the next couple of days. Maximum sustained winds were near 50 mph (85 kph) with higher gusts. The estimated minimum central pressure was 1001 millibars.

NOAA’s CPHC said weakening is forecast over the next couple of days, and Douglas is expected to dissipate by Thursday, July 29. Interests elsewhere in the Papahanaumokuakea Marine National Monument should monitor the progress of this system.