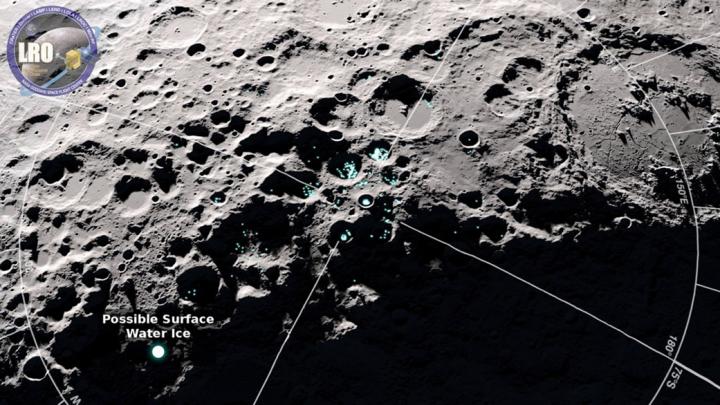 Scientists, using an instrument aboard NASA’s Lunar Reconnaissance Orbiter (LRO), have observed water molecules moving around the dayside of the Moon.

A paper published in Geophysical Research Letters describes how Lyman Alpha Mapping Project (LAMP) measurements of the sparse layer of molecules temporarily stuck to the surface helped characterize lunar hydration changes over the course of a day.

Up until the last decade or so, scientists thought the Moon was arid, with any water existing mainly as pockets of ice in permanently shaded craters near the poles. More recently, scientists have identified surface water in sparse populations of molecules bound to the lunar soil, or regolith. The amount and locations vary based on the time of day. This water is more common at higher latitudes and tends to hop around as the surface heats up.

“This is an important new result about lunar water, a hot topic as our nation’s space program returns to a focus on lunar exploration,” said Dr. Kurt Retherford, the principal investigator of the LAMP instrument from Southwest Research Institute in San Antonio, Texas. “We recently converted the LAMP’s light collection mode to measure reflected signals on the lunar dayside with more precision, allowing us to track more accurately where the water is and how much is present.”

Water molecules remain tightly bound to the regolith until surface temperatures peak near lunar noon. Then, molecules thermally desorb and can bounce to a nearby location that is cold enough for the molecule to stick or populate the Moon’s extremely tenuous atmosphere or exosphere, until temperatures drop and the molecules return to the surface. SwRI’s Dr. Michael Poston, now a research scientist on the LAMP team, had previously conducted extensive experiments with water and lunar samples collected by the Apollo missions. This research revealed the amount of energy needed to remove water molecules from lunar materials, helping scientists understand how water is bound to surface materials.

“Lunar hydration is tricky to measure from orbit, due to the complex way that light reflects off of the lunar surface,” Poston said. “Previous research reported quantities of hopping water molecules that were too large to explain with known physical processes. I’m excited about these latest results because the amount of water interpreted here is consistent with what lab measurements indicate is possible.

Scientists have hypothesized that hydrogen ions in the solar wind may be the source of most of the Moon’s surface water. With that in mind, when the Moon passes behind the Earth and is shielded from the solar wind, the “water spigot” should essentially turn off. However, the water observed by LAMP does not decrease when the Moon is shielded by the Earth and the region influenced by its magnetic field, suggesting water builds up over time, rather than “raining” down directly from the solar wind.

“These results aid in understanding the lunar water cycle and will ultimately help us learn about accessibility of water that can be used by humans in future missions to the Moon,” said Amanda Hendrix, a senior scientist at the Planetary Science Institute and lead author of the paper. “Lunar water can potentially be used by humans to make fuel or to use for radiation shielding or thermal management; if these materials do not need to be launched from Earth, that makes these future missions more affordable.”

“This result is an important step in advancing the water story on the Moon and is a result of years of accumulated data from the LRO mission,” said John Keller, LRO deputy project scientist from NASA’s Goddard Space Flight Center in Greenbelt, Maryland.
Goddard manages the LRO mission for the Science Mission Directorate at NASA Headquarters in Washington, D.C. Funding for the research came from LRO, and the team received additional support from a NASA Solar System Exploration Research Virtual Institute (SSERVI) cooperative agreement.

NASA is leading a sustainable return to the Moon with commercial and international partners to expand human presence in space and bring back new knowledge and opportunities.

Migration can promote or inhibit cooperation between individuals

Corals’ partnership with microalgae helps in stressful times but…