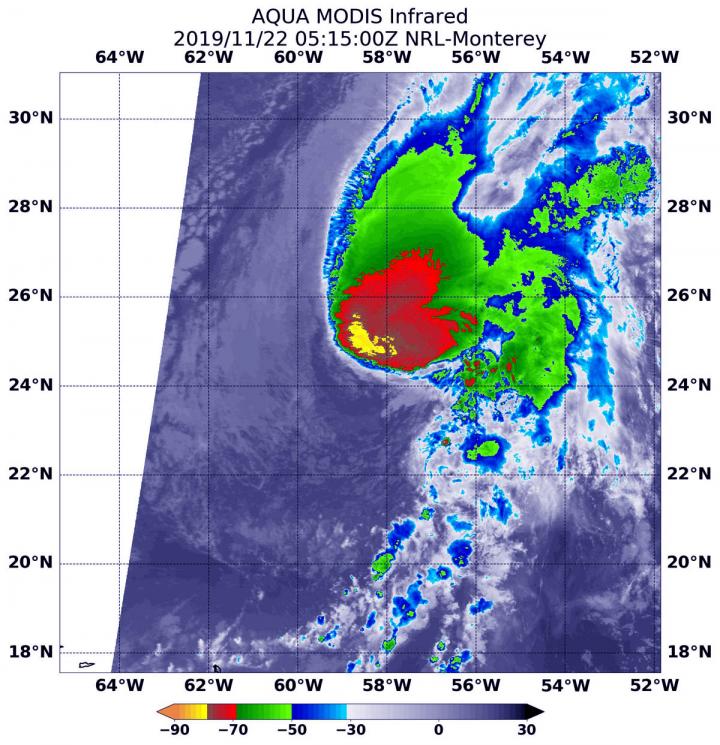 Tropical Storm Sebastian continued to move in a northeasterly direction through the North Atlantic Ocean as NASA’s Aqua satellite passed overhead. Infrared imagery from an instrument aboard Aqua revealed very high, powerful storms with very cold cloud top temperatures in the southwestern quadrant of the storm.  It also revealed that the storm was being sheared apart by outside winds.

On Nov. 22 at 1:15 a.m. EST (0515 UTC), the Moderate Resolution Imaging Spectroradiometer or MODIS instrument that flies aboard NASA’s Aqua satellite used infrared light to analyze the strength of storms within the tropical cyclone. MODIS found those strongest storms only in the southwestern side of the storm where cloud top temperatures were as cold as or colder than minus 80 degrees Fahrenheit (minus 62.2 Celsius). NASA research has found that cloud top temperatures that cold indicate strong storms with the potential to generate heavy rainfall.

The reason the strongest storms were happening only in that quadrant is that outside winds from the southwest are pushing the bulk of clouds and precipitation to the northeast. In general, wind shear is a measure of how the speed and direction of winds change with altitude. Tropical cyclones are like rotating cylinders of winds. Each level needs to be stacked on top each other vertically in order for the storm to maintain strength or intensify. Wind shear occurs when winds at different levels of the atmosphere push against the rotating cylinder of winds, weakening the rotation by pushing it apart at different levels.

Sebastien is moving toward the east-northeast near 15 mph (24 kph). An east-northeastward or northeastward motion at a similar forward speed is expected through the weekend of Nov. 23 and 24. Maximum sustained winds have decreased to near 50 mph (85 kph) with higher gusts.  The estimated minimum central pressure is 1,000 millibars.

The National Hurricane Center said that strong wind shear is expected to prevent Sebastien from getting better organized, so gradual weakening is anticipated. Sebastien is forecast to dissipate by early next week.

Hurricanes are the most powerful weather event on Earth. NASA researches these storms to determine how they rapidly intensify, develop and behave. NASA’s expertise in space and scientific exploration contributes to essential services provided to the American people by other federal agencies, such as hurricane weather forecasting.