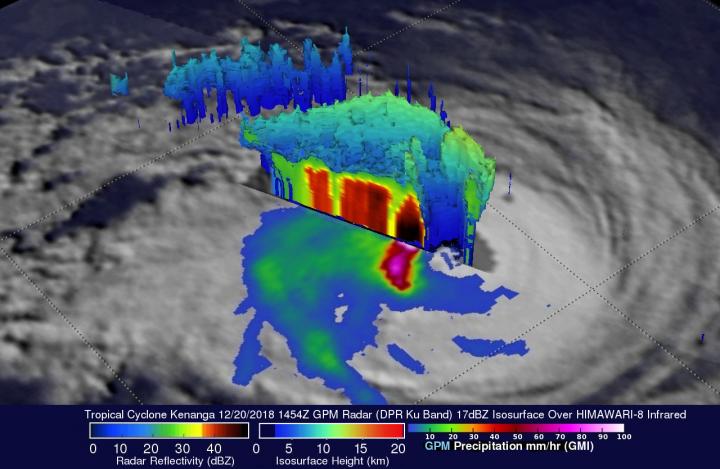 Tropical Cyclone Kenanga is now on a weakening trend and NASA’s GPM core satellite provided a look at the rainfall and cloud heights within the storm.

On December 20, 2018, NASA’s Global Precipitation Measurement mission or GPM core observatory satellite passed over the Tropical Cyclone Kenanga and captured the storm beginning to weaken as predicted. The GPM satellite had an excellent view of the Kenanga when the tropical cyclone’s maximum sustained winds were at 90 knots (103.5 mph). GPM’s pass showed the eye of the storm, visible the day before, had since filled in.

GPM’s instruments including the Microwave Imager (GMI) and the Dual-Frequency Precipitation Radar (DPR) revealed that the powerful storms south of Kenanga’s center are still producing very heavy rainfall at the rate of 214 mm (8.4 inches) per hour in that area. The rainfall in the northern half of the storm had decreased significantly. This GPM 3-D view of Kenanga is looking southwest and was derived by the DPR Ku Band of the radar on the satellite. It showed extremely powerful storms south of Kenanga’s deteriorating eye were returning very strong reflectivity values which help to map the severity of the storm and the rainfall totals. The storm tops of the eyewall which had remained intact on the western side of the cyclone were reaching heights of 12.7 km (7.9 miles).

GPM is a joint mission between NASA and the Japan Aerospace Exploration Agency, JAXA.

The Joint Typhoon Warning Center predicts that Kenanga will continue to weaken rapidly as the dry air within the storm gets colder and heavier causing downdrafts. It is the dry air higher aloft that contributes to stronger convective wind gusts and therefore stronger storms. Kenanga is forecast to dissipate in the next 72 hours as it tracks within the northeast periphery of Tropical Cyclone Cilida.