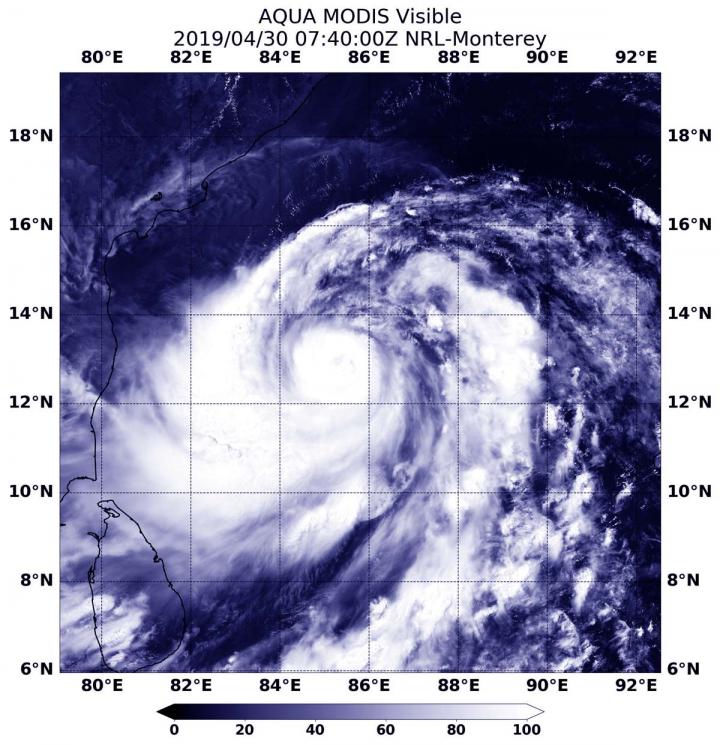 On April 30, at 3:40 a.m. EDT (0740 UTC) the Moderate Resolution Imaging Spectroradiometer or MODIS instrument aboard NASA’s Aqua satellite provided a visible image of Fani. The image revealed a tight circular area of powerful thunderstorms around Fani’s small low-level center of circulation. A large, powerful and thick band of thunderstorms spiraled into the center from the west, and a large fragmented band circled the center from the east. There’s also the hint of a developing eye in the MODIS image.

At 11 a.m. EDT (1500 UTC), the Joint Typhoon Warning Center or JTWC noted that the maximum sustained winds had increased to 90 knots (104 mph/167 kph). That’s the equivalent of a Category 2 hurricane on the Saffir-Simpson Hurricane Wind Scale. Fani was centered near 12.9 degrees north latitude and 85.5 degrees east longitude, approximately 612 nautical miles south-southwest of Calcutta, India. Fani was moving to the northwest.

The JTWC forecast noted that Fani is in an area favorable for further intensification. It is moving through an area of warm sea surface temperatures, as warm as 31 degrees Celsius. Sea surface temperatures warmer than 80 degrees Fahrenheit (26.6 degrees Celsius) are needed to maintain a tropical cyclone, so the warmer waters will help the storm intensify. Fani is also moving through an area with low wind shear, so outside winds will not inhibit further development.

JTWC expects Fani to continue northward and turn northeast. Landfall is expected in about 84 hours or three and a half days on the Odisha coast. Odisha is one of the 29 states of India.

For updated forecasts from the India Meteorological Department, visit: http://www.imd.gov.in/

Students chowing down tuna in dining halls are unaware of mercury…