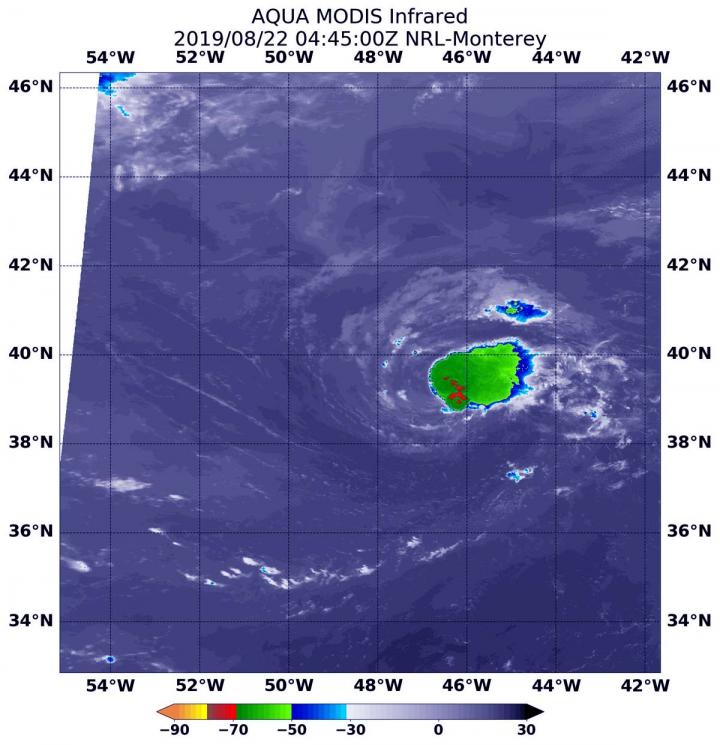 Over the last day, winds outside of Tropical Storm Chantal have been weakening the storm in the North Atlantic Ocean. When NASA’s Aqua satellite passed over the storm from its orbit in space on August 22, the storm had weakened to a depression and strongest storms were still confined to the northeast of the center.

On Aug. 22 at 12:45 a.m. EDT (0445 UTC), the Moderate Imaging Spectroradiometer or MODIS instrument that flies aboard NASA’s Aqua satellite used infrared light to analyze the strength of storms by providing temperature information about the system’s clouds. The strongest thunderstorms that reach high into the atmosphere have the coldest cloud top temperatures.

In general, wind shear is a measure of how the speed and direction of winds change with altitude. Tropical cyclones are like rotating cylinders of winds. Each level needs to be stacked on top of each other vertically in order for the storm to maintain strength or intensify. Wind shear occurs when winds at different levels of the atmosphere push against the rotating cylinder of winds, weakening the rotation by pushing it apart at different levels.

At 5 a.m. EDT (0900 UTC), the center of Tropical Storm Chantal was located near latitude 39.1 degrees north and longitude 45.7 degrees west. The center of Chantal is about 645 miles (1,035 km) southeast of Cape Race, Newfoundland, Canada. The depression is moving toward the east near 17 mph (28 kph). Chantal is forecast to slow down and make a clockwise loop through the weekend. Maximum sustained winds are near 35 mph (55 kph) with higher gusts. The estimated minimum central pressure is 1010 millibars.

NOAA’s National Hurricane Center noted that weakening is expected, and Chantal is forecast to degenerate into a remnant low pressure area by Friday, August 23.