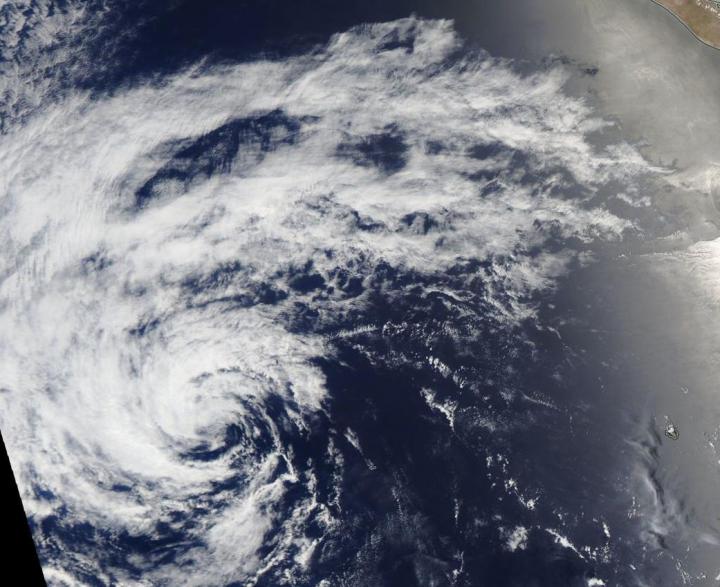 The Eastern Pacific Ocean generated the fourth tropical cyclone of the hurricane season on July 13 and by the next day, it had already weakened into a remnant low pressure area.

Tropical Depression 4E formed around 11 a.m. EDT (1500 UTC) on Saturday, July 13. At that time the center of Tropical Depression Four-E was located near latitude 17.3 degrees and longitude 111.0 degrees west. That’s about 395 miles (635 km) south of the southern tip of Baja California, Mexico. Maximum sustained winds were near 35 mph (55 kph).

On Sunday, July 14 at 5 a.m. EDT (0900 UTC), the center of Tropical Depression Four-E was located near latitude 18.2 degrees north and longitude 114.8 degrees west. The depression is moving toward the west-northwest near 14 mph (22 kph). A turn to the west is expected to occur later today or tonight. Maximum sustained winds are near 30 mph (45 kph) with higher gusts. The estimated minimum central pressure is 1007 millibars (29.74 inches). The depression weakened to a remnant low pressure area later in the day.

NASA’s Aqua satellite passed over the Eastern Pacific Ocean later in the day and the Moderate Resolution Imaging Spectroradiometer or MODIS instrument aboard provided forecasters with a visible image of the depression. The image revealed an eastern quadrant devoid of clouds and rainfall, and the bulk of clouds were pushed northeast of the center. That’s because the storm encountered southeasterly vertical wind shear (outside winds blowing at different speeds at various levels in the atmosphere) that helped weaken the storm.

Scienmag Apr 3, 2019
Credit: Daniel Stahler For years, scientists have assumed that when top predators are reintroduced to an…