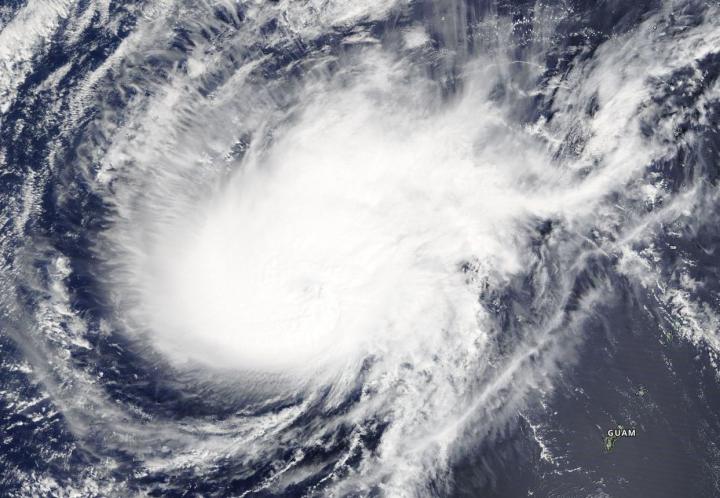 Visible imagery from NASA’s Terra satellite showed that Typhoon Wutip has become more elongated as a result of wind shear.

On February 27, 2019 the Moderate Resolution Imaging Spectroradiometer or MODIS instrument aboard NASA’s Terra satellite provided a visible image of Typhoon Wutip in the Northwestern Pacific Ocean. The image showed Wutip no longer has an eye and the storm has elongated from southwest to northeast.

On February 27, 2019 at 7 p.m. CHST/4 a.m. EDT/0900 UTC the National Weather Service of Tiyan, Guam noted Typhoon Wutip was located near Latitude 16.3 degrees North and Longitude 139.4 degrees East. That’s about 410 miles west-northwest of Guam, and about 430 miles west-northwest of Saipan. Wutip is moving north-northwest at 6 mph. It is expected to make a turn toward the west-northwest with an increase in forward speed over the next 24 hours. Maximum sustained winds have decreased to 90 mph. Wutip is forecast to continue to weaken the next few days.

JTWC forecasts that Wutip will track northwestward and vertical wind shear will continue to disrupt the remaining convection associated with it. Wutip will continue to rapidly decrease in intensity and the storm is forecast to become a depression in a day or two.

Neotropical cloud forests to lose what most defines them: clouds