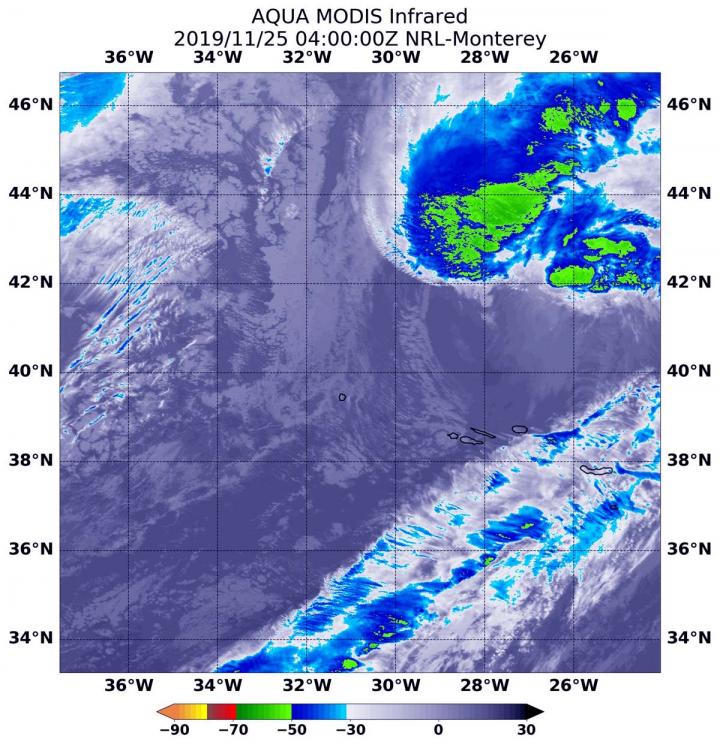 NASA’s Aqua satellite passed over eastern North Atlantic Ocean and captured an infrared view of what is now Extra-tropical cyclone Sebastien. Sebastien transitioned from a tropical storm to an extra-tropical storm on Nov. 24. It has coupled with a cold front and is now headed for the United Kingdom.

At 10 p.m. EST on Sunday, Nov. 24 (0300 UTC Nov. 25), NOAA’s National Hurricane Center (NHC) issued the final advisory on Sebastien. At that time, the center of Post-Tropical Cyclone Sebastien was located near latitude 41.0 degrees north and longitude 28.9 degrees west. It was centered 230 miles (370 km) north-northwest of the Azores Islands. Sebastien was moving toward the northeast near 40 mph (65 kph) and this motion is expected to continue for the next day or so. Maximum sustained winds are near 60 mph (95 kph) with higher gusts. Post-tropical cyclone Sebastien should maintain its intensity before merging with another low during the next day or two. The estimated minimum central pressure is 993 millibars.

NHC’s Forecaster Latto noted “Sebastien has lost its tropical characteristics this evening. The deep convection has decoupled from the low-level circulation, and these features are now separated by a distance of 100 nautical miles and increasing. Two [satellite] passes revealed that the surface low is becoming stretched out, and there is some evidence of a boundary, possibly a front, extending northeast from the center. Furthermore, recent observations from the Azores indicated a slight temperature decrease as the center passed by to the north of those islands, suggesting that a weak cold front is associated with the cyclone. Based on all of these data, there is high confidence that Sebastien has transitioned to an extratropical cyclone.”

What does Extra-tropical Mean?

When a storm becomes extra-tropical, it means that a tropical cyclone has lost its “tropical” characteristics. The National Hurricane Center defines “extra-tropical” as a transition that implies both poleward displacement (meaning it moves toward the north or south pole) of the cyclone and the conversion of the cyclone’s primary energy source from the release of latent heat of condensation to baroclinic (the temperature contrast between warm and cold air masses) processes. It is important to note that cyclones can become extratropical and still retain winds of hurricane or tropical storm force.

NASA’s Aqua satellite used infrared light to analyze the strength of storms in Sebastien. Infrared data provides temperature information, and the strongest thunderstorms that reach high into the atmosphere have the coldest cloud top temperatures. On Nov. 25 at 0400 UTC (Nov. 24 at 11 p.m. EST), Aqua passed over the storm after it had become associated with a cold front. The coldest cloud top temperatures were near minus 50 degrees Fahrenheit or minus 45.5 degrees Celsius. The infrared imagery revealed that the strongest precipitation had become elongated, resembling a frontal system.

Sebastien Headed to the U.K.

The United Kingdom Meteorological Service noted that rains from Sebastien are headed toward the U.K. by Tuesday. The storm is forecast to affect southern England and then move northeast. The Met Office warned that flood-ravaged areas may be affected by more heavy rain over the next several days. The U.K. Met Service issued several yellow weather warnings in southwest and northeast England as torrential showers are expected from Sebastien’s remnants. For updated forecasts, visit: https://www.metoffice.gov.uk/

Neuroscientists develop models to identify internal states of the brain

Scienmag Jan 23, 2020
Identification of GPR108 as 'lock' for adeno-associated virus vector (AAV) is crucial to this emerging novel class…

LGBTQ youths are over-represented, have poorer outcomes in child…