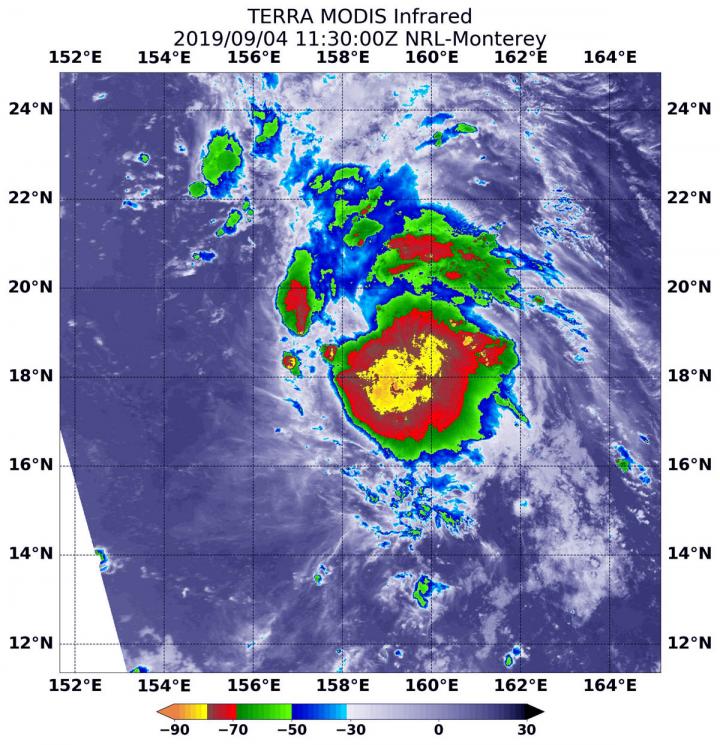 NASA’s Terra satellite provided an infrared view and temperature analysis of Tropical Storm 14W’s cloud tops. Terra satellite showed some powerful thunderstorms in the storm were east of the center.

On Sept. 4 at 7:40 a.m. EDT (1130 UTC), the Moderate Imaging Spectroradiometer or MODIS instrument that flies aboard NASA’s Terra satellite used infrared light to analyze the strength of storms within the 14W. NASA researches these storms to determine how they rapidly intensify, develop and behave.

The Joint Typhoon Warning Center noted that, “Satellite imagery shows a partially exposed low-level circulation center with an area of deep convection (thunderstorms) offset to the east of the center.” Just as on Sept. 3, the low-level circulation center of the storm remained exposed to outside westerly winds so the strongest thunderstorms continue to be pushed to the eastern side of the storm.

JTWC said 14W will move west-northwest across the Pacific Ocean and gradually intensify to 90 knots after five days.