NASA tapped UCF’s dynamic duo, planetary scientists Kerri Donaldson Hanna and Adrienne Dove, to lead a $35 million science mission that will land a spacecraft on a part of the moon never visited before — the Gruithuisen Domes. 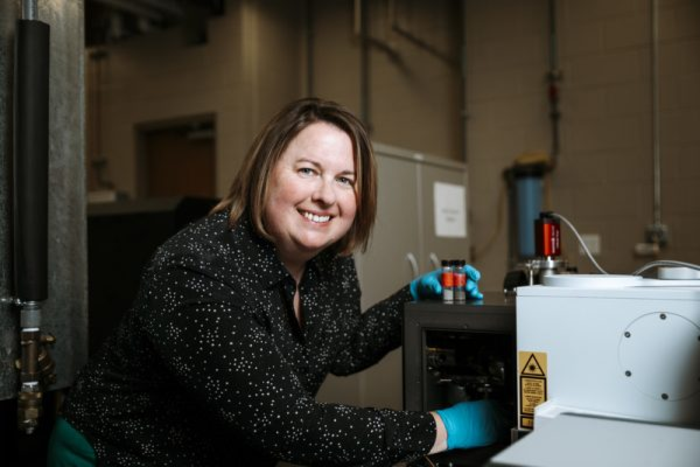 NASA tapped UCF’s dynamic duo, planetary scientists Kerri Donaldson Hanna and Adrienne Dove, to lead a $35 million science mission that will land a spacecraft on a part of the moon never visited before — the Gruithuisen Domes.

The domes, located in the western portion of the Imbrium basin rim, remain a mystery to scientists. Flyover data from previous missions indicate that they are made of silicic minerals — rock hardened from cooled magma. On Earth, the closest comparison may be Mount St. Helens. The volcanic features appear to have large concentrations of heat producing elements, which could potentially be used for resources for long term exploration of the moon.

The robotic mission would launch in 2026 to study the domes’ chemical composition and how dust interacts with the spacecraft and a rover. Two projects were announced June 2 as part of NASA’s highly competitive Payloads and Research Investigations on the Surface of the Moon (PRISM) program, which is part of the federal agency’s plan to use more commercial companies to take payloads to the moon through its Commercial Lunar Payload Services program. A series of missions have been approved to support the Artemis program and continue lunar exploration. The UCF-led mission is called the Lunar Vulkan Imaging and Spectroscopy Explorer.

“We’re still in awe,” says  Donaldson Hanna, the principal investigator. “We’ll be using a suite of instruments on a lander and rover to study the domes’ makeup including the composition and properties of regolith and boulders and how lunar dust responds to the lander and rover as it explores the volcanic dome. There’s potentially a treasure trove of knowledge waiting to be discovered, which will not only help us inform future robotic and human exploration of the moon, but may also help us better understand the history of our own planet as well as other planets in the solar system.”

Chemical signatures from spacecraft orbiting the moon indicate that the surface in this region of the moon is like no other before encountered.

Ball Aerospace will be building three camera systems — the Context and Descent Cameras, the VNIR Imaging Camera, and the Compact Infrared Imaging System. The VNIR Imaging Camera and Compact Infrared Imaging System will be located on the rover and will provide critical information on the composition and properties of the volcanic domes. The Context and Descent Cameras will be on the lander and will be used to observe the rover’s work throughout the mission.

Arizona State University will provide a gamma ray and neutron spectrometer for the mission, which will be located on the rover. This will be the first time this kind of instrument will make measurements from the lunar surface, Donaldson Hanna says. The instrument will be critical in identifying the elemental composition on the surface, which is important to understand how these areas formed. If there’s a high abundance of hydrogen on the surface, the spectrometer should be able to detect it, which could us better understand the origin of the moon’s water.

Donaldson Hanna and Dove are experts in their fields. Donaldson Hanna has vast knowledge about the moon. She’s a co-investigator on NASA’s Lunar Compact InfraRed Imaging System (L-CIRiS), which will be studying the south pole of the moon. She is also part of NASA’s Lunar Trailblazer mission and the Lunar Reconnaissance Orbiter’s Diviner Lunar Radiometer experiment.

Dove, who is the deputy principal investigator, is an expert on space dust and has conducted experiments on NASA and commercially sponsored vehicles, as well as CubeSats and the International Space Station (ISS). She is also one of the investigators another CLPS lander instrument, called Heimdall, that will be looking at dust behvior in lunar landings.

“It’s very exciting to be selected,” says Dove. “It was an ambitious proposal, but what we learn will be invaluable. As we land, we’ll be able to see how dust is disturbed and then watch how the region changes over time. We’ll be able to observe how the rover modifies the surface as it travels across the domes to conduct its work. Right now, we have limited direct observations and data from the Apollo missions, and a few missions from more recent Chinese landers and rovers, so this will be a significant additional contribution.”

Understanding the behavior of dust will be important in planning trips to the moon and long-term mission on its surface. Not only can dust damage spacecraft and instruments, but it could pose hazards to astronauts not properly outfitted.

Another component of the project is to include outreach to local high schools. So, the team will also be working with Orlando area public school teachers to make them part of the mission work at UCF and to use those interactions to build curricula to help students in grades nine through 12 get excited about space science. Graduate students will also be involved in and crucial to the success of the project, engaging the next generation of scientists to study the moon.

Donaldson Hanna received her bachelor’s degree in space sciences from Florida Institute of Technology in 1999, her master’s degree in geological sciences from Brown University in 2010 and her doctorate in geological sciences from Brown University in 2013. Donaldson Hanna was a postdoctoral researcher within the atmospheric, oceanic and planetary physics sub-department at the University of Oxford before receiving a UK Space Agency Aurora Research fellowship to continue her research at Oxford for an additional three and a half years. While at Oxford, she held a Junior Research fellowship at Christ Church College and was awarded the early career Winton Capital Geophysics Award from the Royal Astronomical Society. She joined UCF’s Department of Physics in 2019.

One of UCF’s research strengths is space sciences and innovation. Founded in part to support the growing space industry at Kennedy Space Center, UCF has a long history of space research success. UCF researchers have worked on more than 674 NASA projects worth more than $193 million. It his home to the Florida Space Institute, CLASS and the Exolith Lab.