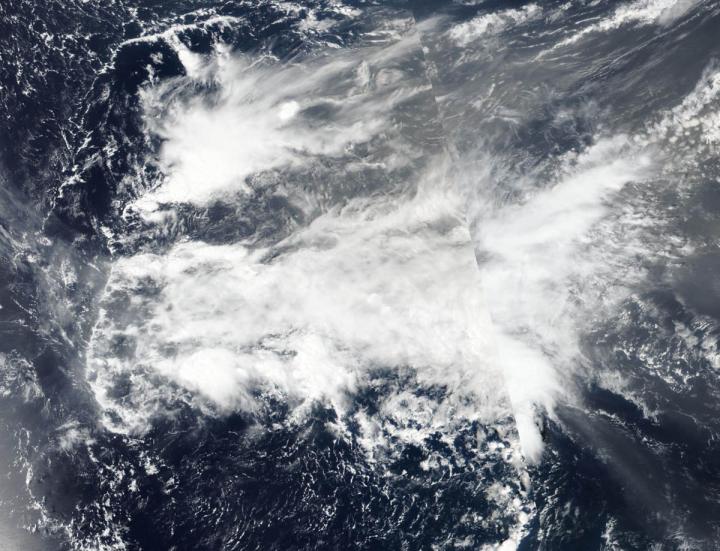 On Sunday, Sept. 20 at 11 p.m. EDT, NOAA’s National Hurricane Center issued their final advisory on Wilfred. Wilfred degenerated into a trough of low or elongated areas of low pressure. At that time, the remnants of Wilfred were located near latitude 15.9 degrees north latitude and longitude 47.4 degrees west. The remnants were moving toward the west near 17 mph (28 kph), and this general motion should continue during the next day or two.

Maximum sustained winds were near 35 mph (55 kph) and forecasters expect winds to continue decreasing over the next couple of days.

Northwesterly vertical wind shear continued to take a toll on Wilfred. Infrared satellite imagery along with scatterometer (wind) data indicated that Wilfred’s low-level circulation had become an open trough of low pressure. Therefore, Wilfred was no longer a tropical cyclone.

On Sept. 20, the Visible Infrared Imaging Radiometer Suite (VIIRS) instrument aboard NASA-NOAA’s Suomi NPP satellite captured a visible image of Wilfred as it opened up into an elongated area of low pressure in the Central North Atlantic Ocean. The remaining thunderstorm development appeared to have a linear shape. Those storms appear to be the result of the system interacting with an upper-level trough located to its northwest.

The trough should continue to move westward at a slightly slower forward speed until it weakens and dissipates within a few days.