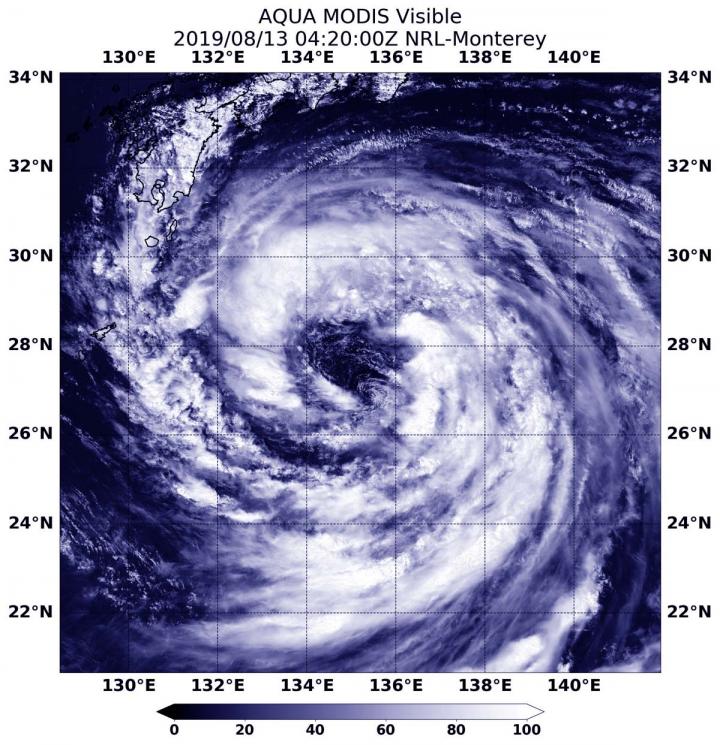 NASA’s Aqua satellite passed over the Northwestern Pacific Ocean and captured a good shot of the wide, ragged center of circulation in Tropical Storm Krosa.

On Aug. 13 at 12:20 a.m. EDT (0420 UTC), the Moderate Resolution Imaging Spectroradiometer or MODIS instrument aboard NASA’s Aqua satellite provided a visible image of Krosa that showed a large center of circulation, surrounded by fragmented bands of thunderstorms.

At 5 a.m. EDT (0900 UTC), the center of Krosa was located near latitude 28.2 degrees north and longitude 133.9 degrees east. Krosa was about 397 nautical miles south-southeast of Iwakuni, Japan. Krosa was moving to the west-northwest and had maximum sustained winds near 45 knots (52 mph/83 kph).

The Joint Typhoon Warning Center said that Krosa is expected to intensify to 50 knots (58 mph/92 kph) as it approaches landfall in southwestern Japan on August 14.

For updated warnings from the Japan Meteorological Agency, visit: https://www.jma.go.jp/jma/indexe.html

Scienmag Feb 7, 2019
Credit: Photo by Jonathan W. Armbruster. No one knows just how many species live in the Amazon…