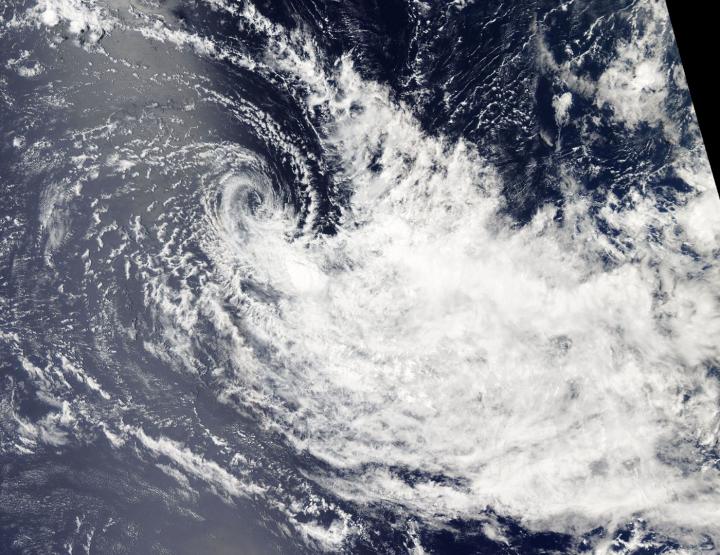 Tropical Cyclone Bouchra may have been re-born over the weekend of Nov. 17 and 18 but by Nov. 20 it was blown apart by wind shear and NASA’s Aqua satellite confirmed that.

In general, wind shear is a measure of how the speed and direction of winds change with altitude. Wind shear can tear a tropical cyclone apart or weaken it.

On Nov. 20 the MODIS or Moderate Resolution Imaging Spectroradiometer instrument aboard NASA’s Aqua satellite saw Tropical Storm Bouchra being torn apart by winds. The center appeared almost cloud free while the bulk of clouds were pushed to the southeast. That’s an indication that winds or wind shear was affecting the storm and elongating its circulation center, weakening the storm again.

By 4 a.m. EST (0900 UTC) on Nov. 20, Bouchra was already weakening and the Joint Typhoon Warning Center issued their final bulletin on the system. At that time, maximum sustained winds were near 35 knots (40 mph/62 kph). It was located near 5.4 degrees south latitude and 78.0 degrees east longitude, about 604 nautical miles southeast of Diego Garcia. Wind shear had increased since Nov. 19 and was pushing the bulk of clouds to the southeast and about 150 nautical miles away from the center.

Bouchra is expected to make its final dissipation by the end of the day on Nov. 20.