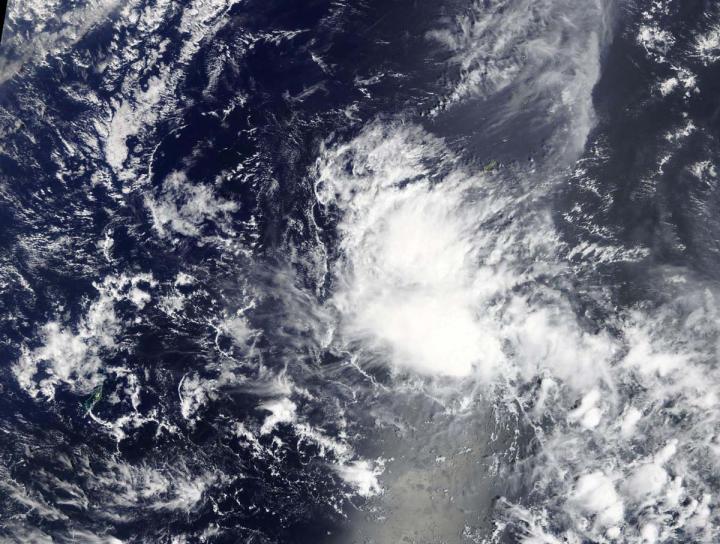 Visible imagery from NASA’s Terra satellite revealed 03W that formed near the island of Yap in the Northwestern Pacific Ocean.

Yap State is one of the four states of the Federated States of Micronesia. The other three states include Kosrae State, Pohnpei State, and Chuuk State.

A tropical storm watch remains in effect for Yap and Ngulu in Yap State and Kayangel in the Republic of Palau.

On March 15, the Moderate Resolution Imaging Spectroradiometer or MODIS instrument aboard NASA’s Terra satellite provided a visible image of 03W in the Northwestern Pacific Ocean. The image showed an elongated storm.

At 2 p.m. EDT (1800 UTC) on March 15 (4 a.m. CHST on March 16 local time) the National Weather Service (NWS), Guam, noted that the center of Tropical Depression 03W was located near Latitude 7.9 degrees North and Longitude 140.9 degrees East. That’s about 130 miles south of Fais and about 220 miles east-southeast of Yap. 03W is moving west at 8 mph and is expected to maintain this general course and speed through the weekend, passing close to Koror on Sunday. Maximum sustained winds remain at 30 mph.

NWS noted “damaging winds are currently not expected at yap. However…the strongest winds are on the north side and 03w is expected to pass south of Yap…meaning that Yap will receive these strong winds as the center of 03w passes by. Small craft should return to port and any small loose objects should be brought indoors.”

A new sequencing method to detect DNA modifications of relevance to…