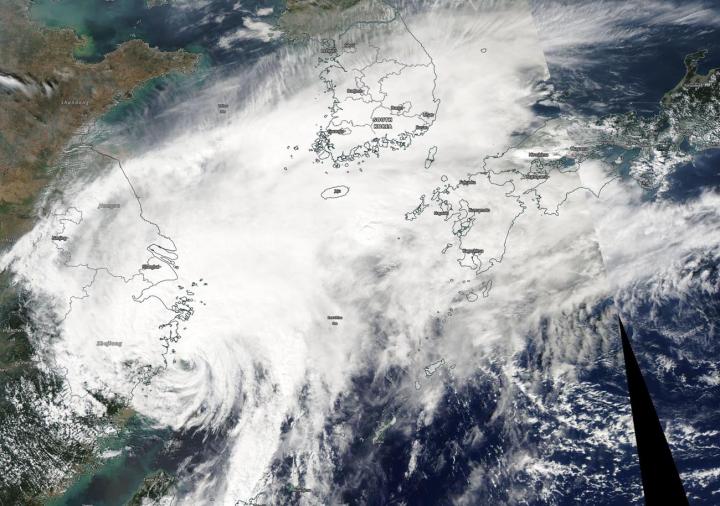 The bulk of Typhoon Mitag’s clouds and precipitation has been pushed north of its center, extending its reach over the East China Sea. Mitag was centered just off the coast of China’s Zhejiang province when NASA-NOAA’s Suomi NPP satellite passed overhead, but the bulk of the clouds were pushed north of center to the Korean Peninsula and southern Japan.

The Visible Infrared Imaging Radiometer Suite (VIIRS) instrument aboard Suomi NPP provided a visible image of Mitag on Oct. 1, showing its eye was just off the coast of China’s Zhejiang province in the East China Sea. The VIIRS image revealed some bands of thunderstorms wrapped around the partially-exposed, ragged low-level center of circulation off the China coast.

The main area of deep convection (rising air that forms thunderstorms that make up a tropical cyclone) and thunderstorms is located north of center and had decoupled from the center. That decoupled area of storms extended northeast to the Korean Peninsula and to Kyushu, the southwestern most of Japan’s main islands.

Visible imagery from NASA satellites helps forecasters understand if a storm is organizing or weakening. The shape of a tropical cyclone provides forecasters with an idea of its organization and strength. The more circular a storm appears, the stronger it can be. Because the bulk of Mitag’s clouds and showers are pushed north of the center, it appears to be weakening. The image was created by the NASA Worldview Earth Observing System Data and Information System (EOSDIS) at NASA’s Goddard Space Flight Center in Greenbelt, Md.

On Oct. 1, the China Meteorological Administration posted several warnings including Typhoon Warning, and warnings for heavy rain. Those warnings can be found at: http://www.cma.gov.cn/en2014/weather/Warnings/WarningSignals/201409/t20140919_261777.html

At 5 a.m. EDT (0900 UTC) on Oct. 1, Typhoon Mitag had maximum sustained winds near 65 knots (75 mph/120 kph). It was centered near 28.7 degrees north latitude and 122.3 degrees east longitude, about 156 nautical miles south-southeast of Shanghai, China. Mitag is moving north. Forecasters at the Joint Typhoon Warning Center expect Mitag will turn to the northeast and pass over South Korea while weakening. It is expected to become extra-tropical in the Sea of Japan.