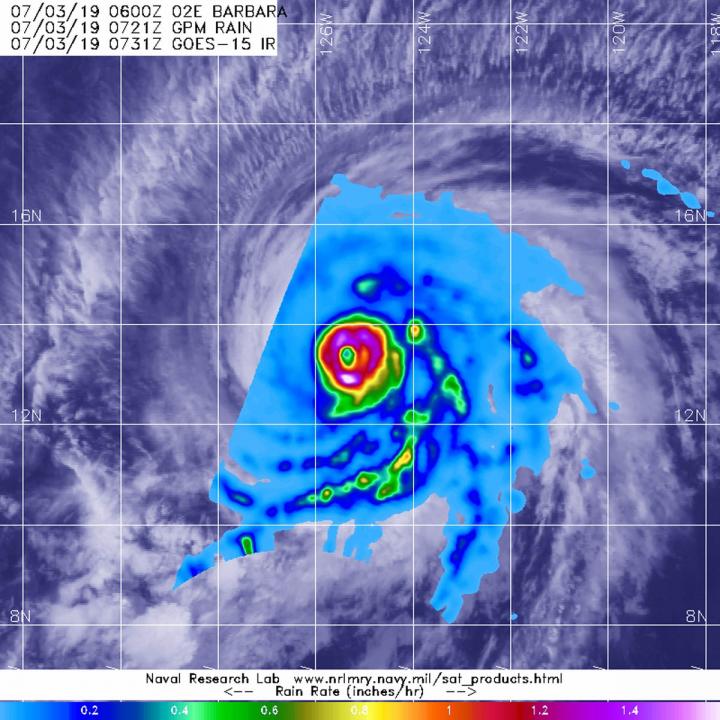 The Global Precipitation Measurement mission or GPM core satellite passed over the storm and measured the rate in which rain was falling throughout it.

The GPM core satellite passed over Hurricane Barbara at 3:21 a.m. EDT (0721 UTC) on July 3, 2019. GPM found the heaviest rainfall rates were occurring around the eye. There, rain was falling at a rate of more than 50 mm (2 inches) per hour. GPM is a joint mission between NASA and the Japan Aerospace Exploration Agency, JAXA.

NOAA’s National Hurricane Center noted at 4 a.m. EDT (0900 UTC), the eye of Hurricane Barbara was located near latitude 13.5 degrees North and longitude 125.6 degrees West.  Barbara is moving toward the west-northwest near 14 mph (22 kph).

Barbara is about 1,995 miles (3,210 km) east of Hilo, Hawaii. A motion toward the west-northwest or northwest, but at a slightly slower forward speed, is expected Wednesday through Friday.

Maximum sustained winds remain near 155 mph (250 kph) with higher gusts.  Barbara is a category 4 hurricane on the Saffir-Simpson Hurricane Wind Scale.  Gradual weakening is expected on Wednesday, followed by faster weakening on Thursday and Friday. Barbara is forecast to weaken to a tropical storm some time on Friday.

Insight into competitive advantage of modern humans over Neanderthals

Scienmag Oct 1, 2019
Credit: S. Ricci A team of Japanese and Italian researchers, including from Tohoku University,…