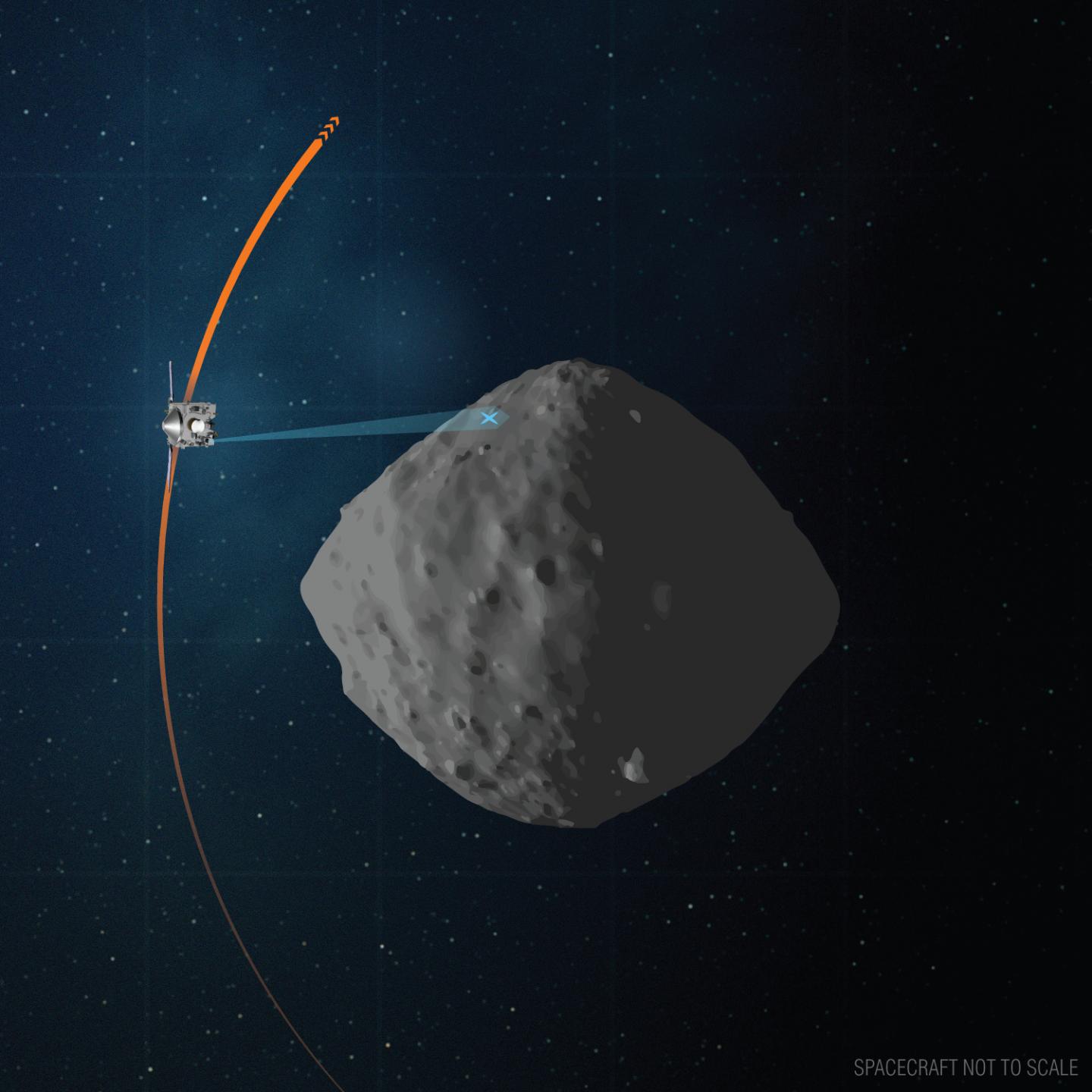 NASA’s OSIRIS-REx mission is on the brink of discovering the extent of the mess it made on asteroid Bennu’s surface during last fall’s sample collection event. On Apr. 7, the OSIRIS-REx spacecraft will get one last close encounter with Bennu as it performs a final flyover to capture images of the asteroid’s surface. While performing the flyover, the spacecraft will observe Bennu from a distance of about 2.3 miles (3.7 km) – the closest it’s been since the Touch-and-Go Sample Collection event on Oct. 20, 2020.

The OSIRIS-REx team decided to add this last flyover after Bennu’s surface was significantly disturbed by the sample collection event. During touchdown, the spacecraft’s sampling head sunk 1.6 feet (48.8 centimeters) into the asteroid’s surface and simultaneously fired a pressurized charge of nitrogen gas. The spacecraft’s thrusters also mobilized a substantial amount of surface material during the back-away burn. Because Bennu’s gravity is so weak, these various forces from the spacecraft had a dramatic effect on the sample site – launching many of the region’s rocks and a lot of dust in the process. This final flyby of Bennu will provide the mission team an opportunity to learn how the spacecraft’s contact with Bennu’s surface altered the sample site and the region surrounding it.

The single flyby will mimic one of the observation sequences conducted during the mission’s Detailed Survey phase in 2019. OSIRIS-REx will image Bennu for 5.9 hours, which is just over a full rotation period of the asteroid. Within this timeframe, the spacecraft’s PolyCam imager will obtain high-resolution images of Bennu’s northern and southern hemispheres and its equatorial region. The team will then compare these new images with the previous high-resolution imagery of the asteroid obtained during 2019.

After the Bennu flyby, it will take several days for the data from the flyover to be downlinked to Earth. Once the data are downlinked, the team will inspect the images to understand how OSIRIS-REx disturbed the asteroid’s surface material. At this point, the team will also be able to evaluate the performance of the science instruments.

The spacecraft will remain in asteroid Bennu’s vicinity until May 10, when the mission will enter its Return Cruise phase and begin its two-year journey back to Earth. As it approaches Earth, the spacecraft will jettison the Sample Return Capsule (SRC) that contains the rocks and dust collected from Bennu. The SRC will then travel through the Earth’s atmosphere and land under parachutes at the Utah Test and Training Range on Sep. 24, 2023.

Once recovered, the capsule will be transported to the curation facility at the agency’s Johnson Space Center in Houston, where the sample will be removed for distribution to laboratories worldwide, enabling scientists to study the formation of our solar system and Earth as a habitable planet.

NASA’s Goddard Space Flight Center in Greenbelt, Maryland, provides overall mission management, systems engineering, and the safety and mission assurance for OSIRIS-REx. Dante Lauretta of the University of Arizona, Tucson, is the principal investigator, and the University of Arizona also leads the science team and the mission’s science observation planning and data processing. Lockheed Martin Space in Denver built the spacecraft and provides flight operations. Goddard and KinetX Aerospace are responsible for navigating the OSIRIS-REx spacecraft. OSIRIS-REx is the third mission in NASA’s New Frontiers Program, which is managed by NASA’s Marshall Space Flight Center in Huntsville, Alabama, for the agency’s Science Mission Directorate in Washington.

For more information about this story and OSIRIS-REx visit: https://www.nasa.gov/osiris-rex