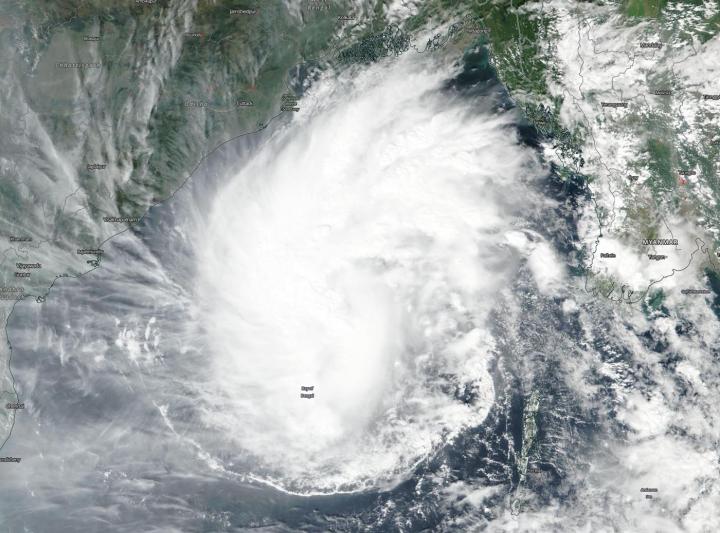 NASA-NOAA’s Suomi NPP satellite passed over the Bay of Bengal, Northern Indian Ocean and found that Tropical Storm Matmo was positioned in the center of that body of water.

Visible imagery from the Visible Infrared Imaging Radiometer Suite (VIIRS) instrument aboard NASA-NOAA’s Suomi NPP satellite on Nov. 7 showed Matmo appeared somewhat elongated from north to south, because of a large band on thunderstorms extending north from the center of circulation.

On Nov. 7 at 4 a.m. EST (0900 UTC), Matmo had maximum sustained winds near 55 knots (63 mph/102 kph). Matmo was located near latitude 15.0 degrees north and longitude 88.7 degrees east, about 353 nautical miles east-southeast of Visakhapatnam, India. Matmo is moving to the northwest.

The Joint Typhoon Warning Center expects Matmo will move northwest, then later, north. The storm will strengthen to 85 knots, but will weaken rapidly to dissipate on approach to the north coast of the Bay of Bengal. Threatened landmasses include India and Bangladesh.

The India Meteorological Service has issued a cyclone watch for the Odisha-West Bengal coasts. Odisha is a state in India. Odisha has 301 miles (485 kilometers) of coastline along the Bay of Bengal from Balasore to Ganjam. West Bengal is on the eastern bottleneck of India. It extends from the Himalayas (in the north) to the Bay of Bengal in the south.

Matmo is forecast to make landfall just east of Kolkata on Nov. 9. Kolkata is the capital of the Indian state of West Bengal.

Typhoons and hurricanes are the most powerful weather event on Earth. NASA’s expertise in space and scientific exploration contributes to essential services provided to the American people by other federal agencies, such as hurricane weather forecasting.

Unless warming is slowed, emperor penguins will be marching towards extinction