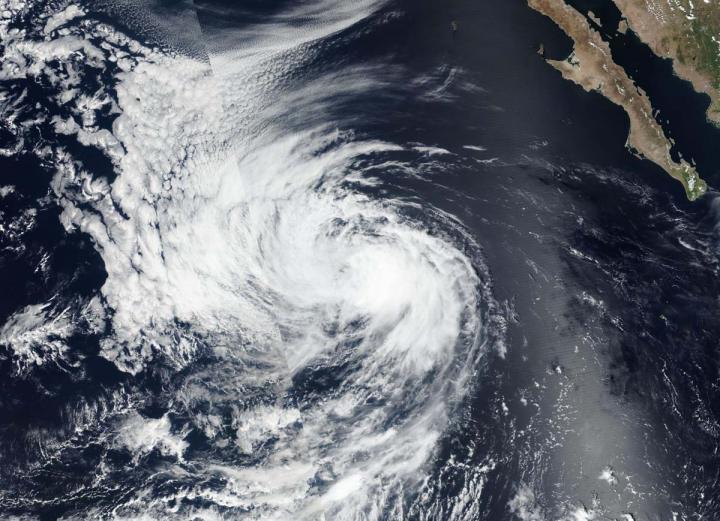 NASA-NOAA’s Suomi NPP satellite passed over the Eastern North Pacific Ocean and captured a visible image of Tropical Storm Lowell that revealed the storm was dealing with wind shear.

Wind shear is caused by winds outside of a tropical cyclone that are blowing against it at different altitudes and directions. Wind shear weakens tropical cyclones by adversely affecting their circulation. Wind shear can elongate a storm and make it spin more slowly, leading to weakening.

The Visible Infrared Imaging Radiometer Suite (VIIRS) instrument aboard Suomi NPP provided a visible image of Lowell on Sept. 23. Around the time of the Suomi NPP image, the National Hurricane Center noted a band of deep convection and thunderstorms had continued over the eastern quadrant of the storm, but the center was exposed and was located west of that band of thunderstorms. Lowell was being affected by moderate northwesterly wind shear which is not expected to abate much.

By 5 p.m. EDT on Sept. 23, Lowell was maintaining strength with a few bands of deep convection and developing thunderstorms located 30 nautical miles or more to the east of the exposed center.

Lowell was moving toward the west-northwest near 10 mph (17 kph). Maximum sustained winds are near 45 mph (75 kph) with higher gusts. Gradual weakening is forecast to begin by late Thursday.

NHC said a turn toward the west is expected Thursday morning, with that heading and a gradual increase in forward speed continuing through early next week. Lowell is expected to weaken to a tropical depression by late Friday and become a remnant low by early Saturday.